Ever heard of André Thevet?

Born around 1516 in Angoulême, France, he was educated in the convent school of that city, although his teachers recorded that as a child he was "more interested in reading books than he was in religion," which seems like a reasonable choice to me.  Be that as it may, he evidently decided religion was worth studying after all, because at the age of twenty he took his vows and became a Franciscan priest. 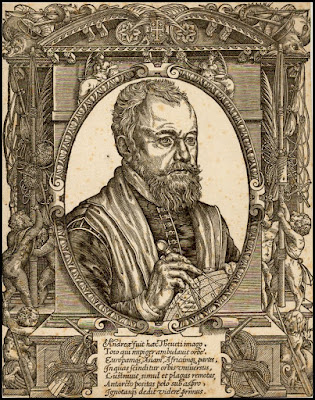 [All the images in the post are in the Public Domain]

He led a life that was pretty remarkable, especially as compared to most of the people of his day (even the well-educated ones).  With the blessing of Jean de Bar-le-Duc, Cardinal of Lorraine, he visited Egypt, Greece, Turkey, and Palestine -- and in 1555 set out with Nicolas Durand de Villegaignon, a French naval officer, to cross the Atlantic and explore the eastern coast of South America.

So no one in Europe knew much about the Americas at that point other than (1) they existed, (2) they were big, and (3) they were inhabited by people who weren't really all that receptive to a bunch of white guys showing up and saying "this is ours now."

But that didn't stop Thevet and de Villegaignon, who ended up in what is now Brazil, with their base of operations as the tiny settlement that ultimately would become Rio de Janeiro.  And this is where the story gets interesting.

Thevet was a self-styled naturalist, and he set about to document, describe, and draw all the interesting new plants and animals he found.  But the problem was, Thevet was also apparently a dedicated spinner of wild yarns.  So his book, Les singularités du France-Antarctique, has a few at least marginally accurate bits, like the sloth: 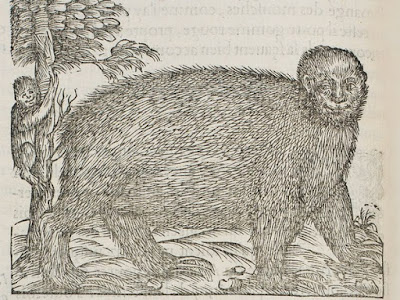 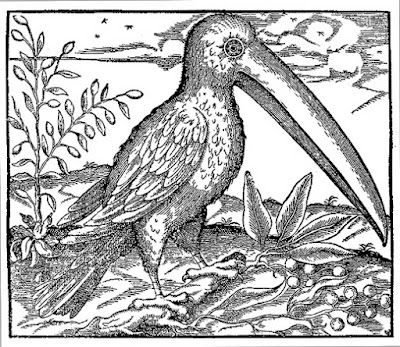 But then, for reasons unknown, Thevet threw in some things like the succarath of Patagonia: 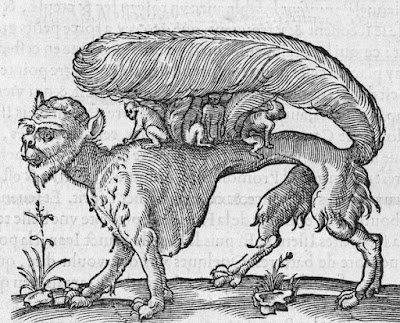 Which looks like he could use a good meal or two.  Then there's the camphruch, a sort of weird water unicorn thing (notice the webbed hind feet): 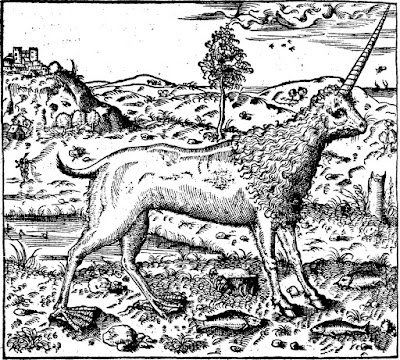 And the aloés, a sort of fish-goose mashup: 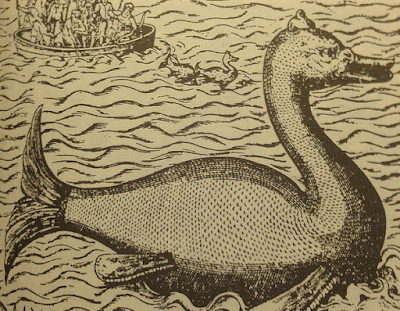 The yuanat, which apparently is the bastard child of a cat and an iguana: 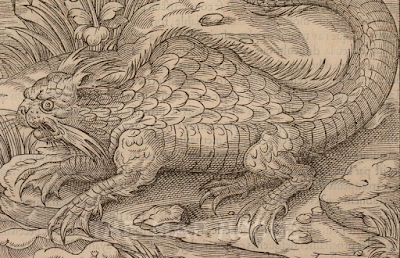 And worst of all, the licorne-de-mer, which looks a bit like a giant fish with a chainsaw protruding from its forehead: 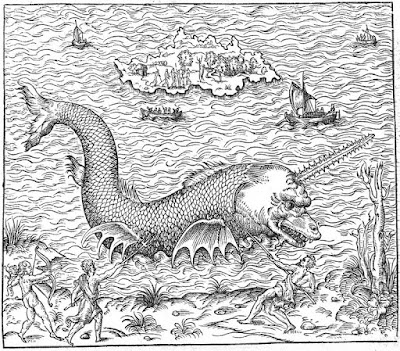 What strikes me about all of this is that I've been to South America (twice), and there's enough weird and fascinating wildlife there that you have to wonder what Thevet's possible motivation was for inventing all of this.  (I'm aware that some of this may have been quick glimpses followed by filling in the blanks in his memory with whatever came to mind.  I already noted the yuanat's resemblance to an iguana, and the saw-horn of the licorne-de-mer looks like the flat, toothed snout of a sawfish.  But still, a lot of it seems to have been spun from whole cloth.)

It's a question I've asked before -- what does a hoaxer get out of hoaxing?  Assuming there's not some obvious motivation like money?  Profit doesn't seem to be the issue here.  Thevet would likely have had precisely the same number of sales of his book, once he got back to France, with illustrations of real animals and plants as he did with all of this fanciful stuff that he'd clearly made up as he went along.  I mean, you don't need to exaggerate anything to see how bizarre the Pink Fairy Armadillo is: 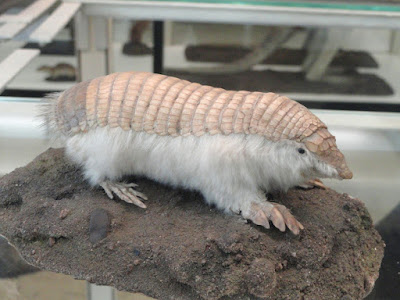 Or the White-faced Saki: 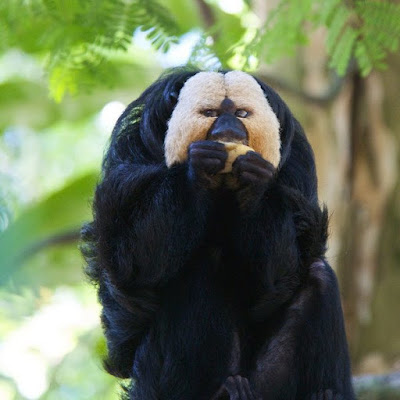 Or the South American Tapir: 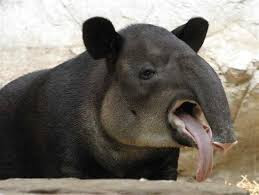 My guess is that he just got lazy, and decided it was more fun to sit on board ship and sip brandy and make up fanciful animals than it was tromping around the rain forest trying to see what was actually out there.

Thevet was hardly the only one who did this, of course.  The early days of European exploration were rife with examples of people coming back from ship voyages with bizarre tales of human tribes with their faces in the middle of their chests, people who had dogs' heads, people whose feet pointed backwards so their tracks would confuse anyone trying to follow them, a tribe whose members had enormous, pendulous elephant ears, and one-legged men with a single enormous foot that they used as a parasol on hot days (a legend used for wonderfully humorous effect in C. S. Lewis's The Voyage of the Dawn Treader).  I guess "yeah, we had a good trip and saw some cool people who looked basically like us only with darker skin" just wasn't good enough.

As amusing as all this may seem, I find this tendency maddening.  It's hard enough to figure out what's real and what's not under ordinary circumstances, but hoaxers complicate matters, and for no good reason other than a desire for notoriety.  So as much as I can chuckle at Thevet's duck/lion/unicorn, people like him set back the actual science of natural history significantly with their fairy stories.

I'd like to say that all of this is a thing of the past, but it's the same thing that motivates a lot of claims of cryptid-hunters, isn't it?  Now, I hasten to say that this doesn't invalidate all cryptid claims; as I've said many times before, there may really be something weird and unknown to biology out there lurking in the woods, lakes, or oceans.  But we have enough trouble dealing with the inevitable tendency of people (especially under high-adrenaline conditions) to exaggerate or misinterpret what they see and hear without the added complication of hoaxers making shit up.

So I encourage you to go to South America, which is a wonderful, diverse, fascinating, and huge place to explore.  It's home to over 300 species of hummingbirds (the eastern United States has a grand total of one), and countless other birds, reptiles, amphibians, mammals, insects, and assorted miscellany.  If you go there, though, watch out for cat-iguanas.  I hear they pack a nasty bite.