In the brilliant and disturbing 1997 movie Gattaca, set in the "not very distant future," it has become possible to genetically screen for... just about everything.  So most couples conceive using in vitro fertilization followed by pre-implantation genetic diagnosis (PGD), to screen out susceptibilities to common diseases and to screen in high IQ, a tendency to physical strength, good looks, and emotional stability.

The movie is about a young man, Vincent (played movingly by Ethan Hawke) whose dream of becoming an astronaut is thwarted by the fact that he is an "in-valid" -- conceived the old-fashioned way, and thus a mix of varying traits from his parents, both good and bad.  While there is an official policy of non-discrimination on the basis of genes, the hiring requirement of a urine test for drug screening allows potential employers to find out what you're made of -- and to find a pretext not to hire you if it turns out that you have a potential toward early heart disease or higher aggression.  When everything about you -- your fitness, intellect, personality, even your suitability as a mate -- can be discerned from a fingerprick, a cheek swab, or a stray hair, there is no longer such a thing as "private information." 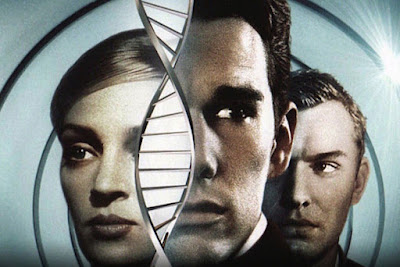 I won't tell you further about it because it's well worth watching, and Vincent's struggle against being held back by the genetic cards he was dealt is deeply inspiring.  But it's interesting to look at whether the "not very distant future" has panned out in the twenty-two years since the movie was made.

Like much of the cutting edge of science, pre-implantation screening hasn't progressed quite as fast as people expected.  The conditions we can reliably screen out are fairly few in number, and the idea of screening in highly complex traits such as IQ or personality or appearance has turned out to be elusive at best.  Our potential to use genetic information even to predict something a good bit simpler -- adult height -- was dealt a significant blow by a paper that came out in Cell last week, called, "Screening Human Embryos for Polygenic Traits Has Limited Utility," by a team led by Ehud Karavani of the Hebrew University of Jerusalem.

What they did is pretty impressive.  Using aggregate data from no less than 700,000 people, they came up with a protocol for generating a genetic "score" that seemed to correlate with adult height, and then tried to see if applying the score to individuals from 28 different families who were not part of the original study worked the other way -- if the score reliably predicted adult height.

To say that the results were disappointing is a bit of an understatement.  It predicted the tallest person in the family in only seven of the families -- a hit-rate of 25%.  Worse still, five of the people it identified as tallest turned out to be shorter than average for the family.  The method would almost certainly be even less accurate if you tried to apply it to a trait that shows greater variability and (likely) less overall dependence on genetics -- such as IQ.

"There’s still a great deal of variability that’s not accounted for by the genes they were analyzing or simulating in their polygenic score," said Susanna Haga, geneticist at Duke University, who was not part of Karavani's team.  "Therefore, you’re still going to see a wide distribution of height or IQ points."

While I'm fascinated with genetics and all for learning more about how our DNA works, I'm not entirely sure this is a bad thing.  Pre-implantation genetic diagnosis to allow a couple who are carriers of (say) cystic fibrosis to conceive a healthy child is one thing; screening an embryo to try to boost its eventual intelligence crosses a line.  It's edging way too close to eugenics for my comfort, and in any case, we haven't even been able to come up with a consistent definition for what we mean by intelligence, so the idea that we'd screen embryos on that basis is dodgy right from the start.

So while the results of the Karavani study are a setback to our understanding of how DNA affects our development, in one way it's actually kind of a relief.  We humans don't exactly have a stellar track record for applying scientific discoveries in a positive or humane fashion, and the number of ways this kind of information could be misused is astronomical.  I know of people who are passionately interested in genealogy but have refused to sign up for Ancestry or 23 & Me genetic testing because they're afraid of what might be done with the data, and while I can understand the concern, it's nice to know that the ability to surreptitiously abstract from our DNA information about our appearance, personality, intelligence, and aptitudes is not possible...