Rushing toward a paradigm shift

I have a sneaking suspicion that the physicists are on the threshold of a paradigm-breaking discovery.

The weird data have been building up for some time now, observations and measurements that are at odds with our current models of how the universe works.  I say "models (plural)" because one of the most persistent roadblocks in physics is the seeming incompatibility of quantum mechanics and general relativity -- in other words, coming up with a Grand Unified Theory that pulls a consistent explanation of gravity into our conceptual framework for the other three fundamental forces (electromagnetism and the weak and strong nuclear forces).  All attempts to come up with an amalgam have either "led to infinities" (had places in the relevant equations that generate infinite answers, usually an indicator that something is seriously wrong with your model) or have become so impossibly convoluted that even the experts can't agree on the details (such as string theory with its eleven spatial dimensions, something that's always reminded me of Ptolemy's flailing about to save the geocentric model by adding more loops and twists and epicycles so the data would fit).

And still the anomalous data keep rolling in.  Three weeks ago I wrote about a troubling discrepancy that's been discovered in the value of the Hubble Constant, which describes the rate of expansion of the universe -- there are two ways to measure it, which presumably should give the same answer, but don't.

Then last week, physicists at a lab in Hungary announced that they'd found new evidence of "X17," a mysterious particle that could be a carrier for a fifth fundamental force.  The argument is a bit like the observation that led to the discovery of the neutrino back in 1959 -- during beta radioactive decay, the particles emitted seemed to break the laws of conservation of energy and momentum, until that time strictly enforced in all jurisdictions.  Wolfgang Pauli said, basically, "Well, that can't be right," and postulated that an undetected particle was carrying off the "lost" momentum and energy.  It took twenty-eight years to prove, but he was right.

Here, it's the behavior another radioactive substance, beryllium-8, which emits light at the "wrong" angle to account for all of the energy involved (again, breaking the law of conservation of energy).  Conservation could be re-established if there was an undetected particle being emitted with a mass of 17 MeV (about 33 times the rest mass of an electron).  Even considering the neutrino, this seemed a little bit ad hoc -- "we need a particle, so we'll invent one to make our data fit" -- until measurements from an excited helium nucleus generated anomalous results that could be explained by a fifth force carried by a particle with exactly the same mass.

If that's not enough, just this week a paper appeared in Nature Astronomy about that elusive and mysterious substance "dark matter" that, despite defying every effort to detect it, outweighs the ordinary matter you and I are made of by a factor of five.  Its gravitational signature is everywhere, and appears to be most of what's responsible for holding galaxies together -- without it, the Milky Way and other rotating galaxies would fly apart.

But what is it?  No one knows.  There are guesses, but once again, those guesses have come up empty-handed with respect to any kind of experimental verification.  (And that's not even considering the even-weirder dark energy, which outweighs dark matter by a factor of two, and is thus the most common stuff in the universe, comprising 68% of what's out there -- even though we have not the slightest clue what it might be.)

The paper, by a team led by astrophysicist Qi Guo of the Chinese Academy of Sciences, is called, "Further Evidence for a Population of Dark-Matter-Deficient Dwarf Galaxies," and describes no less than nineteen different galaxies that have significantly less dark matter than conventional explanations (such as they are) would need to explain (1) how they formed, and (2) what's holding them together.  Lead author Guo, for her part, is baffled, and although the data seem solid, she admits to being at a bit of a loss.  "We are not sure why and how these galaxies form," she said, in a press release in Science News. 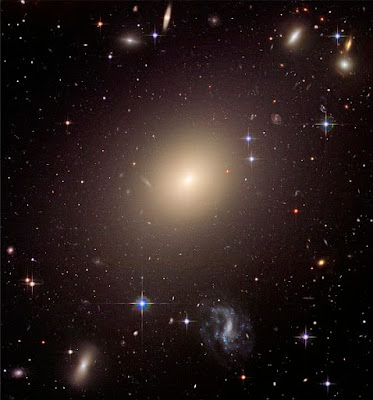 Elliptical galaxy Abell S740 [Image is in the Public Domain, courtesy of NASA]

So the anomalous observations keep piling up, and thus far, no one has been able to explain them, much less reconcile them with all the others.  I'm reminded of what Thomas Kuhn wrote, in his seminal book The Structure of Scientific Revolutions: "Scientific revolutions are inaugurated by a growing sense... that an existing paradigm has ceased to function adequately in the exploration of an aspect of nature to which that paradigm itself had previously led the way."

It must be both nerve-wracking and exhilarating to be a physicist right now.  Nerve-wracking because suddenly finding out that your previous model, the one you were taught to understand and cherish during your training, is inadequate -- well, the response is frequently to do what Irish science historian, writer, and filmmaker James Burke calls "scrambling about to stop the rug from being pulled out from under years of happy status-quo."  On the one hand, you can understand that, apart from any emotional attachment one might have to an accepted model; it is an accepted model because it worked perfectly well for a while, accounting for all the evidence we had.  And there are countless examples when a model was challenged by what appeared to be contradictory data, and it turned out the data were mismeasurements, misinterpretations, or outright fabrications.

Which is why Pauli was so sure that the neutrino existed -- the law of conservation of energy, he reasoned, was so well-supported that it just couldn't be wrong.

But now -- well, as I said, that data keep piling up.  Whatever's going on here, they aren't all mismeasurements.  It remains to be seen what revision of our understanding will sweep away all the oddities and internal contradictions and make sense of what the physicists are seeing, but I have no doubt we'll find it at some point.

And there's the exhilarating part of it.  What a time to be in research physics -- when the race is on to pull together and explain an increasingly huge body of anomalous stuff, and revise our understanding of the universe in a fundamental way.  It's the kind of climate in which Nobel Prizes are won.

Being an observer is exciting enough; I can't imagine what it might be like to be inside it all.