The language of music

Music is, in a lot of ways, the universal human language.  If there is a culture that does not have some form of music, I've never heard of it.  It speaks to us on a deep, primal level, which is why dance is as ubiquitous as music.

We hear the beat, we want to move our bodies, and for a lot of us, that experience is transformative, almost transcendent.

It's also undeniable that musical traditions differ.  I've been a musician since I was a teen, primarily on flute and piano (although I also play bagpipes, something I think accords me some bragging rights, although others may differ, such as my wife and my two dogs).  I've played primarily in three different musical traditions -- western European classical music, traditional Celtic music, and Balkan music.  It hardly bears mention that these idioms differ, as do (honestly) just about any two musical traditions you want to pick.  From the formal, cerebral intricacy of J. S. Bach, to the wild abandon of an Irish reel, to the insane asymmetrical time signatures of a Bulgarian kopanica, there's no doubt that there are tremendous differences in style, rhythm, melody, and structure. 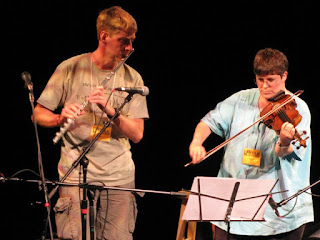 An interesting question, considering how universal music appears to be, is if there really is an underlying similarity between all of these traditions.  The differences are obvious; consider the different scales used in a lot of Jewish folk music that gives its distinctive sound, and even odder (to my ear) are the quarter-tone intervals used in Middle Eastern music from such ethnically distinct traditions as the music of the Arabs, Turks, and Persians.

To answer this question, a team led by Samuel Mehr of Harvard University did a structural analysis of 5,000 songs from 60 different cultures, and found that despite the differences there are fundamental similarities between music no matter where it's from or what purpose it serves.  The authors write:


Music is in fact universal: It exists in every society (both with and without words), varies more within than between societies, regularly supports certain types of behavior, and has acoustic features that are systematically related to the goals and responses of singers and listeners.  But music is not a fixed biological response with a single prototypical adaptive function: It is produced worldwide in diverse behavioral contexts that vary in formality, arousal, and religiosity.  Music does appear to be tied to specific perceptual, cognitive, and affective faculties, including language (all societies put words to their songs), motor control (people in all societies dance), auditory analysis (all musical systems have signatures of tonality), and aesthetics (their melodies and rhythms are balanced between monotony and chaos).

It's a fascinating result, and makes me wonder if we have some fundamental brain structure that is responsible for not only our universal response to music, but the commonalities that exist between songs from different cultures.   "In the way that all languages in the world have a set of phonemes – all words in the world are made up of small sets of speech sounds – so it is with melodies," said W. Tecumseh Fitch, of the University of Vienna, who co-authored the study.  "All melodies can be built up from a small set of notes.  This suggests there is a biological basis that is constant across all humans, but interpreted differently in different human cultures."

Which I think is amazingly cool.  We've already seen here at Skeptophilia that musical training enhances brain plasticity, and seen music's role in emotional catharsis, so it should come as no real surprise that there could be an underlying neurological reason why it affects us on so many different levels.

One limitation of the study that came to my mind, however, is that all they looked at were songs.  As versatile as the human voice is, this restricts the range (literally) of melodies they could consider.  Additionally, there are musical traditions that have traveled very far from the tonal centering the researchers found to be ubiquitous -- consider the twelve-tone system of the brilliant Arnold Schönberg, and the startlingly experimental music of people like John Cage and Karlheinz Stockhausen, just as three examples.  There's no denying that there are people who find their pieces emotionally moving, but they're about as far from a simple folk melody as you can get.

You have to wonder what Mehr et al.'s algorithm would do with them.

But enough of this.  I've been listening to some piano music by Claude Debussy while I'm writing this, and one of my favorite pieces -- La cathédral engloutie (The Drowned Cathedral) just came on.  I think I'm ready just to close my eyes and sink into it.