The social context of animals

One misperception about the world that has proven to be awfully persistent is that there's some kind of qualitative difference between humans and the rest of the natural world.

Even our signature ability -- problem solving and rational thought, i.e., intelligence -- is a difference in degree and not in type.  The other primates show tremendous ability to problem solve, and "higher-order thinking" has been seen not only in our near relatives but in corvids (crows and ravens) and octopuses (which seem to be the brainiest invertebrates by far).

And before we start congratulating ourselves on being the smartest beings on the planet, it must be said that we're also the only ones using what intelligence we have to completely destroy the place.

So the whole "human vs. animal" distinction I still hear people talking about is really pretty meaningless.  Every difference you can come up with between humans and our non-human relatives is a shared in some way with other animals, even if it's not to the same degree or expressed the same way.

Our sense of having a bunch of special characteristics got another blow last week from two studies out of the Max Planck Institute in Germany, one of Vulturine Guineafowl (Acryllium vultinurum) and the other of golden shiner fish (Notemigonus crysoleucas).  And both of them point at the same conclusion -- another feature of the human species we like to consider unique to humanity, complex social structure, isn't unique to us at all.

The first study is called "Multilevel Society in a Small-Brained Bird," authored by a team led by Damian Farine.  The title of the paper sounds like an unwarranted cheap shot until you see a picture of the bird itself: 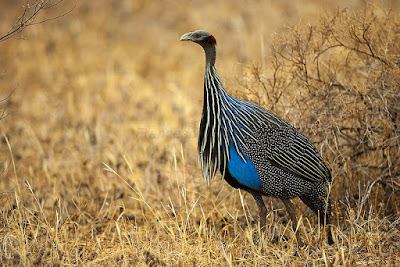 You have to admit that this is a pretty spectacular brain-to-body-size ratio.  And frankly, the bird's actual name -- "Vulturine Guineafowl" -- isn't all that complimentary, either.

Be that as it may, Farine's team found that the interactions of these highly social birds were way more complex than they looked.  The four hundred individuals in the population they studied consisted of eighteen subgroups made up of between thirteen and sixty-five individuals each, and even though there was some mixing of the groups during feeding and roosting, overall the cliques were remarkably stable.  Guineafowl preferentially associate with certain individuals, and make long-lasting bonds with each other that are not apparently based on one of the two usual reasons -- sex/pair bonding and kinship.

In other words: guineafowls have buddies.

"To our knowledge, this is the first time a social structure like this has been described for birds," said Danai Papageorgiou, lead author of the paper.  "It is remarkable to observe hundreds of birds coming out of a roost and splitting up perfectly into completely stable groups every single day.  How do they do that?  It’s obviously not just about being smart."

Had to get in another dig about brain size, didn't you, Dr. Papageorgiou?

The other study, titled "Individual and Collective Encoding of Risk in Animal Groups," was authored by a team led by Iain Couzin, and studied an animal generally considered to be even less intelligent than guineafowl -- a schooling species of fish called a golden shiner.

The surprise came when the researchers found that the strength of the startle event wasn't a function of the amount of schreckstoff in the water, it was a function of the physical structure of the school.  If the school itself was spread out, a small amount of schreckstoff generated strong startle behavior.  When the fish were close to their schoolmates, they didn't startle nearly so easily.

The comparison to the human phenomenon of "courage in numbers" is obvious.

"Making each individual more sensitive to risk can lead to an excessive number of false alarms propagating through the group," said study lead author Couzin.  "On the other hand, strengthening social connections allows individuals to amplify information about risk, but buffers against the system becoming overly sensitive."

So other animals -- even fish and small-brained birds -- share a great many features with ourselves.  This comes as no surprise to evolutionary biologists, who see all of life as on a giant connected spectrum anyhow.  But these two studies suggests there are more commonalities between humans and other animals in terms of social complexity than we realized.

"We have traditionally assumed that intelligence resides in our brains, in the individual animal," Couzin said.  "But we have found the first evidence that intelligence can also be encoded in the hidden network of communication between us."