Given all the horrible and discouraging news we're bombarded with on a daily basis, sometimes it's nice to focus on some of the positive things humans are doing.

Today we'll look at Carlos Magdalena, the Spanish-born botanical horticulturist who works with saving severely endangered plant species in his lab at Kew Gardens, near London.  As a brief aside, Kew is one of those places I think everyone should visit at some point in their lives.  Besides simply being gorgeous, it has one of the most extensive collections of rare plants in the world, and a half-day's walk through their greenhouses (or "glasshouses" as they call them in the UK) will open your eyes to the astonishing diversity gifted to us by the process of evolution.

The darker side of this, however, is the extent to which the world's plant species are threatened.  It's a general rule in evolutionary biology that when conditions are stable, natural selection favors specialization (witness the hundreds of species of hummingbirds in the Andes, many of which specialize in living at a narrow range of altitudes and feeding on only one or two species of flowers).  Changing conditions, however, favor generalists -- such as the preponderance of rats and pigeons in most of the world's cities.

The problem is that human actions have caused formerly stable ecosystems to start changing quickly, and the specialists are being hit hard.  Nowhere is this more obvious than the Amazonian rain forest, where a policy of turning over tracts of woodland on what honestly is marginal soil to agricultural and mining interests, something that has only accelerated with the reckless and ignorant policies of Brazilian president Jair Bolsonaro.  (Encouraged, it must be added, by Donald Trump, whose attitude toward the environment seems to be "use it up and who gives a shit what happens afterward.")

The result has been devastating.  Magdalena estimates that one in five plant species worldwide is on the way to extinction, and that species go extinct every day -- some without ever being catalogued and studied.

But I said this was going to be an upbeat post, so I want to look at what Magdalena is doing to fight against this -- and how his efforts may be saving dozens of species from disappearing forever.

Magdalena's specialty is figuring out how to germinate seeds.  It's trickier than it sounds; if you're a gardener you probably buy packets of seeds at your local home and garden store, but what you may not realize is that the reason those varieties are sold is because they've got the unusual feature of being easy to germinate.  Where I live, here in upstate New York, seeds of most native species need to be stratified in order to germinate -- they need to be exposed to a period of cold, simulating passage through the winter.

Explaining why my attempts as a kid to grow an apple tree from a seed in an apple I'd eaten all resulted in failure.

Other plants, though, have additional complications.  Despite my background in evolutionary biology, one thing I've never quite understood is why some plants have seeds that are ridiculously difficult to germinate (many types of orchids come to mind).  The only reason I've come up with goes back to specialization; if a plant lives in a very stable ecosystem with an extremely narrow range of conditions, evolving to require those conditions and no others isn't a significant disadvantage.  It only becomes a problem if you take the seeds and try to sprout them elsewhere -- because then you have to somehow emulate all of those factors in your greenhouse.

But Magdalena might be the world's expert on solving this problem.  He single-handedly saved the world's smallest water lily, Nymphaea thermarum, when the only known population of the plant (in Rwanda) was destroyed in 2008.  His work with this and other species of severely endangered plants led to his being dubbed in a Spanish newspaper as el mesias de las plantas -- "the messiah of plants."

It's an apt moniker. 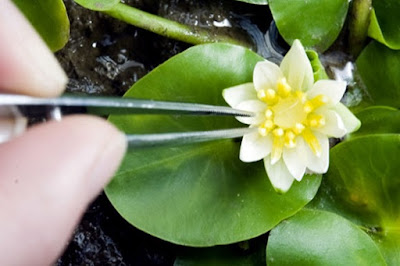 What Magdalena is trying to accomplish, however, sometimes must seem an uphill battle.  "There are seventy species of plants that we know of that have less than ten individuals left," he said in the interview linked above.  "In some cases, there is just the last individual plant left, or there are the last three individuals left.  Those will probably be more of a priority because the clock is ticking, and these specimens might have only few minutes left.  These last individuals could disappear by the end of this week.  Maybe the individuals could disappear with the next cyclone, or when the next pest gets introduced."

He's currently working on plant species from the island of Mauritius, best known to biologists as the former home of the dodo.  He was successful at germinating the seeds of a species in the genus Elaeocarpus for which only two individuals were left alive, but has been unsuccessful thus far at propagating the palm Hyophorbe amaricaulus -- which is down to a population of one.

However difficult his job can be, Magdalena is impelled to keep at it because of its critical importance.  "We cannot stabilize the planet’s climate if there is no tropical forest," he said.  "We cannot ensure that we will have resources to support humankind in terms of medicines, food, water and more without protecting these forests...  Plants are going extinct every single day, probably every single hour.  It’s like killing all your golden-egg hens systematically.  It is so nonsensical.

"We really need to realize that protecting the forests is not optional," he added.  "This is not something that’s just idealistic.  This is at the very core of our survival."