A fight over dates

One of the most frustrating things about science, from the point of view of non-scientists, is that sometimes we have to say "we simply don't know the answer to that yet."

Of course, I'm sure it's frustrating enough to the scientists as well, but at least they should be used to it.  Science is always pushing at the boundaries of what we know, and using evidence and logic to find explanations.  It's inevitable that sometimes even a significant amount of evidence is insufficient to reach a conclusion.  At that point, the only honest thing to say is "we don't know, and may never know."

This drives a lot of people nuts.  The attitude is that because science has proven to be pretty damn good at finding answers, that it should have a 100% hit rate.  Meteorologists can't always accurately predict the track or intensity of storms?  Ha, I'd like to have a job where I could be wrong half the time and still get paid!  The promising new cancer drug turns out not to work in vivo?  Don't listen to the medical professionals, they'll say something is good for you today and then say the opposite tomorrow.  This fault is at risk of an imminent earthquake?  Okay, then tell me when, down to the hour and minute, so I can plan ahead.

Otherwise, what good are you scientists, anyhow?

It all comes from a fundamental misapprehension of the scientific process -- that it should provide certainty.  It'd be nice, but the real world usually doesn't cooperate, and sometimes even with their best efforts, the scientists have to admit befuddlement.

I ran into an especially good example of that a couple of days ago because of a dear friend, a history scholar and loyal reader of Skeptophilia, who asked me if I'd ever heard of Hueyatlaco and the Steen-McIntyre report.  She sent me a link from the rather loopy site s8int called "Details of the Steen-McIntyre Hueyatlaco Coverup" that (despite their seeming bent toward Ancient Astronauts explanations of things) gives the basics of the story -- and it's a pretty peculiar one, even when you don't credit any of the woo-woo trappings.

Now, keep in mind that until two days ago I'd never heard of this, so I still consider my own knowledge shallow and tentative, and I ask forgiveness for any mistakes or misapprehensions I have (and request a quick note if there's something in this post I can correct).  But this is what I've gathered.

Hueyatlaco is an archaeological dig site in the state of Puebla in central Mexico.  In the 1960s, an archaeologist named Cynthia Irwin-Williams was working at the site and uncovered stone tools and the bones of pre-glacial North American mammals (such as the woolly rhinoceros) that showed signs of having been butchered for meat.  Williams thought that such an early site deserved close attention, and she sent samples to the USGS for radioisotope dating.

The results were more than a little perplexing.  The date returned by the USGS was on the order of 250,000 years ago.  This predates modern Homo sapiens by a good fifty thousand years, so -- if the date was accurate -- the tools and the animal bones were associated not with modern humans, but with our predecessors, possibly the Neanderthals or Denisovans.  Also perplexing was that this would push back the earliest hominid occupation of North America not just by a little, but by a factor of sixteen!

It's understandable why the scientists found that hard to swallow.  The idea that humans (or their near relatives) had been in the Americas for 230-odd-thousand years longer than we thought they had, and had left no traces whatsoever during that time except at this one site, was difficult to believe.  So the natural conclusion was reached that the dating of the site was somehow askew. 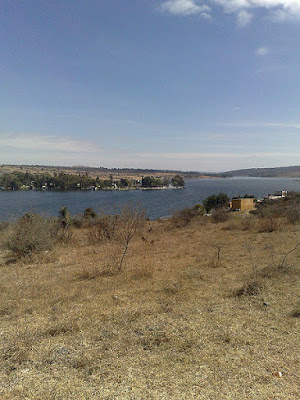 Most archaeologists stuck to their guns, and said the most parsimonious explanation was still that somehow the dating protocol was being applied incorrectly.  The samples were contaminated with older rocks, perhaps, which would give a systematic overestimate for the site's age.  Then, to muddy the waters further, there were allegations of a conspiracy to cover up the anomalous data.  The official report from the USGS simply dropped one of the zeroes, reporting the site's age as 25,000, not 250,000 years.  One of the archaeologists who'd been working on the site, Virginia Steen-McIntyre, was pressured to do her dissertation not on the perplexing Hueyatlaco data, but on more conventional research into volcanic ash strata.  Steen-McIntyre decided, however, that she wouldn't be silenced, and came out with a report of her own, taking apart the critics a point at a time -- and included a claim that she was harassed for being unwilling to stay silent.

Other scientists have tried (and failed) to resolve the odd data.  Biostratigrapher Sam Vanlandingham published two papers, in 2001 and 2004, first reconfirming the dating of the strata to not tens, but hundreds of thousands of years ago, and then (most startling of all) confirming this using microfossils of diatoms from contemporaneous sediments at the site -- and demonstrating that those diatom species had been extinct for at least eighty thousand years.

The upshot of it all is that we still don't have an answer.  Most archaeologists still doubt the existence of hominids in the Americas prior to the arrival of the ancestors of the Native Americans on the order of (at the most) twenty thousand years ago, and assert that there is not a single grain of evidence that the Neanderthals and Denisovans (or any other hominds, for that matter) ever made it to the Western Hemisphere.  But that leaves us with a puzzle -- multiple studies, cross-checked and confirmed, keep agreeing with the older date as found by Irwin-Williams, Steen-McIntyre, and others.

So if you've been waiting for an answer... well, that's it, folks.  We don't know.  It's one of the most curious archaeological puzzles I've ever run across, and at this point, the words I hear about it most often from reliable sources are "contentious" and "uncertain" and "controversial."  A lot of experts have a lot of opinions about it, but no one has been able to do either of two things -- explain how the dates could be correct when there's no evidence of hominids in the Americas at any time during the next two hundred thousand years, or explain how the dates could be incorrect when they've been independently corroborated multiple times.

As frustrating as it is, that's where we have to leave it if we're going to be scrupulously honest about things.  As good skeptics, we have to be willing to leave the question in abeyance, indefinitely if need be, for want of conclusive evidence to settle it.  In science, the answer "We don't know yet" is always the fallback when the data is insufficient to merit a conclusion -- however that offends our deep desire to be a hundred percent sure about everything in the universe.