A lens into the past

I have the unfortunate tendency to get fascinated by things that are impossible to research.

I was asked not too long ago about when and where -- if time travel into the past were possible -- I'd like to visit.  My immediate answer was Britain during the "Dark Ages," the period between the withdrawal of Roman forces in the 5th century C.E. and the Anglo-Saxon conquest in the 7th century.

My friend asked why I picked that time and place.  What was so interesting about it?

"I don't know if there's anything interesting about it," I responded.  "It's because no one really knows what happened during that time span.  There are almost no written records -- just about everything we know is from writings done three or four hundred years later.  It's the lack of information that fascinates me."

Fortunately, it's not always necessary to have written records to find out about a place's history.  That's why we have archaeology.  We can obtain a remarkably clear picture about a long-gone society simply from the debris it leaves behind.

There were three wonderful examples of this just in the last two weeks.

In the first, researchers in the Nile Delta found a skeleton and other artifacts in a place called Tell Timai (known as Thmouis in Ptolemaic times).  The skeleton was dated to about 180 B.C.E.  It showed numerous signs of trauma -- both healed and unhealed injuries to the bone, and evidence that its owner hadn't been buried so much as thrown on the ground and covered with a thin layer of dirt and sand.

Why the timing of this is interesting is that the man's death was during the same period as a revolt against Pharaoh Ptolemy V by native Egyptian rebels (the Ptolemies themselves were Greeks, and were widely regarded by their native subjects as usurpers).  Ptolemy successfully squashed the rebellion, an event that is recorded on one of the most famous written documents of all -- the Rosetta Stone.

The skeleton of the unfortunate Tell Timai man not only shows injuries typically suffered on the battlefield, but was surrounded by evidence of battle -- arrowheads and scorched "ballista balls" (a baseball-sized projectile fired from Greek and Roman catapults).  Also present were coins dating to no earlier than 205 B.C.E.  This is precisely the timing of the Thmouis Revolt -- the Rosetta Stone says it went on in a sporadic fashion starting around 206 B.C.E. and ending with the decisive battle twenty years later.

So it appears that the Tell Timai skeleton is a war casualty from a battle recorded on one of the world's most celebrated written records.


Archaeological findings can go back a hell of a lot longer ago than 2,200 years, however.  Another discovery that was reported last week is from Indonesia, and gives us a lens into a time when (as far as we know) writing had yet to be invented.  A cave painting on the island of Sulawesi, dated to 43,900 years ago, is a hunting scene -- by itself not that uncommon -- but the hunters depicted are what archaeologists call therianthropes, which are mythical human/animal hybrids. 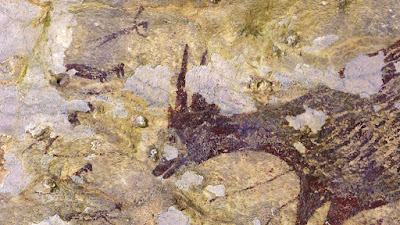 A detail of the Sulawesi cave painting

What's exciting about this is that it shows the artist wasn't just depicting realism, (s)he was telling a story.  We've apparently been storytellers for a very long time, something that (as a novelist) makes me very happy.

"The human-animal figures in the Sulawesi hunting scene are quite small relative to the pig and anoa [a small native species of buffalo] images," said Nicholas Conard, archaeologist at the University of Tübingen.  "That may be because ancient artists depicted these therianthropes as flying.  In the stories and personal accounts of people from modern foraging groups, movements through spirit worlds are often via flight rather than walking or running."

So just like we do today, our very distant ancestors enjoyed telling fanciful stories about strange creatures -- and some of those stories made their way into art.


People who know me are aware of another of my strange obsessions, and that's with body art.  I have three tattoos, one of which is a full sleeve that extends onto my chest -- it's not like I exactly keep it secret, or anything.  So after finding the previous article, about our history as storytellers, it made me happy to jump to the next, which shows that we've also been decorating our own bodies for a long, long time.

Archaeologist Anne Austin, of the University of Missouri, was working with three thousand year old mummies from Deir el-Medina in Egypt, and upon analyzing x-rays found clear evidence of tattoos.  One woman, presumed to be a religious leader or practitioner of magic, had no fewer than thirty tattoos, including an intricate pattern of crosses on both of her arms.  Another had symmetrically-placed images of the Eye of Horus, and a third a seated baboon -- symbolizing knowledge and wisdom -- on the side of her neck.

"Only tattooed females have been identified at Deir el-Medina," Austin said.  "Discoveries there challenge an old idea that tattoos on women connoted fertility or sexuality in ancient Egypt.  Deir el-Medina tattoos appear to be more closely associated with women’s roles as healers or priestesses."

It's amazing what we can learn about human history without written records (or, in the case of the Tell Timai skeleton, how we can supplement what written records we have).  Everything the archaeologists uncover makes the picture clearer.  As my dear friend, the novelist Cly Boehs (author of the brilliant Back Then and The Most Intangible Thing) puts it, "We are made of the stories we tell."

And sometimes those stories resonate down through the ages, giving us a glimpse of societies that have been gone for thousands of years.