Over at the site Pararational I ran into an article describing a cryptid I'd never heard of.  Huge, brawny, with pointed ears and enormous, leathery wings, this character haunts the forests of the Pacific Northwest.  As if they didn't already have enough problems with their Sasquatch infestation.

And despite living for ten years in Seattle, I'd never heard of him. So, dear readers, meet... 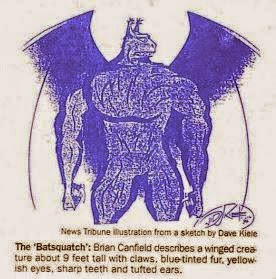 The first thing I notice, being a biologist, is that Batsquatch seems to have no... equipment.  If you get my drift.  Above the waist, he's built like a bodybuilder, and below the waist he's built like a Ken doll.  So you have to wonder how there'd be more than one of them.  Maybe they reproduce from spores, or something.


Me and my friend were hiking around Mt. Shasta and out of one of the crevices, flew out this big creature.  I mean this thing was huge.  It was as tall as a man, as stocky as Hulk Hogan and had leathery wings.  I believe the wing span was at least 50 feet from one end to the other.  I was holding up my camera, but was paralyzed with fear as this thing flew by.  I didn’t get a picture, sorry.  What do you think this might be?  Could it have been a pterodactyl?  It was flying or gliding fast, it seemed to have a head of a bat.  Thinking about it, it doesn’t have the head of a pterodactyl,  I just saw a picture of a pterodactyl and the heads are not similar.  I would think it had the head of a bat or maybe more like a fox.  The damn thing finally flew into a clump of trees and vanished.  I heard you guys might be going back to Mt. Shasta, if you do, please look out for this thing.  If you see it, you will piss all over yourself, I kid you not.


(Perhaps) Batsquatch is an extra-dimensional creature that dropped through a rift and got stuck here.  If the first sighting really was in close proximity to the Mt. St. Helens eruption, it seems probably that the force of the blast may have ruptured time/space allowing something to get sucked through. In that case, it may have flown around for a while and died in some remote location, or else found a way home.

So anyway.  If you're in the Northwest, look out for Batsquatch.  Given how big he supposedly is, I don't see how you could miss him, frankly.  If you see him, maybe he won't hurt you if you offer him a Miller Lite.