Let the sun shine in

Every time I think that the "natural health" movement has plumbed the absolute depths of credulous stupidity, I find out there's plenty of room down below.

It turns out that "down below" is an apt metaphor, because as I found out from about a dozen loyal readers of Skeptophilia, the latest craze is "perineum sunning."  For those of you not well-versed in anatomical terminology, the perineum is the region between the genitals and the anus.

So, yes, it's exactly what it sounds like.  You're supposed to take off all your clothes, and expose your nether orifice to the direct sunlight. 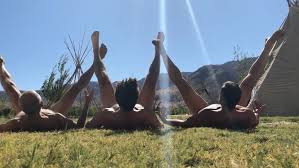 I would like to be able to say, "ha-ha, I made that up," but sadly, I didn't.  Practitioners claim that exposing your butthole to the sun activates the vibrational frequencies of your chakras, or something like that.  "In a mere thirty seconds of sunlight on your butthole, you will receive more energy from this electric node than you would in an entire day being outside with your clothes on," said one guy in an informational YouTube video.

"My experience with perineum sunning has been profound," said another enthusiast.  "I have been practicing this for a few months now.  I start my day with five minutes of perineum sunning and feel energized for hours.  I no longer rely on coffee for energy to start my day because I am getting my energy from the sun."

I have just a few things to say about this:
Look, it's not that I have anything against nudity.  Given the choice, I'd never wear swim trunks while swimming, and when the weather's warm I enjoy a nice outdoor naked romp as much as the next guy.  But deliberately and repeatedly exposing one of the most sensitive parts of the body to the direct, harsh rays of the sun is not "alternative health," it's "absolute nonsense."

And potentially dangerous as well.

So by all means shuck the clothes if you want to and have an opportunity that will not result in your being arrested for indecent exposure.  But take care not to scorch your naughty bits.

And for cryin' in the sink, learn a little actual science so you can tell the difference between a healthful practice and the latest idiotic fad.  Because I can nearly guarantee that if you think this is as stupid as it gets, all you'll need to do is wait awhile and see what they come up with next.