Rings in the sky

Sometimes I enjoy mysteries just because they're mysteries.

I ran across an astronomical curiosity yesterday that I'd never heard of before, and one that has had no convincing explanation; a ring galaxy.  The most famous example is "Hoag's Object," a ring galaxy discovered by astronomer Arthur Hoag.  It's about six hundred million light years away -- so not exactly in our neighborhood -- but that hasn't stopped the Hubble Space Telescope from getting an amazing photograph of it: 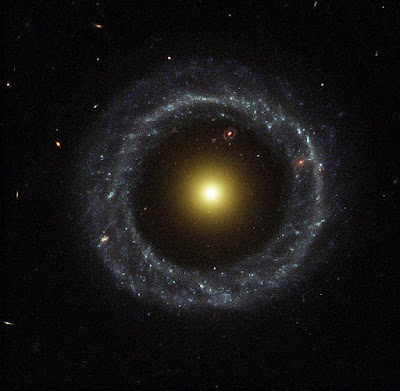 Hoag's Object [Image is in the Public Domain, courtesy of NASA]

As you can see, it's a torus (donut) of stars with a bright, dense cluster in the middle, and a gap where there's not much in the way of anything.  The estimate is that it's a hundred thousand light years across, so a bit larger than the Milky Way.

The curiosity is the gap.  It's hard to imagine what would cause this arrangement of matter; the stars in the ring must be orbiting fast enough to compensate for the gravitational pull of the stars in the center, but why were there none orbiting with the right velocity to end up in between?  My first thought was that it might be something similar to what caused Cassini's Division in the rings of Saturn, but when I looked into this, it turns out that the physicists don't know what caused that, either.

Various ideas were fielded to explain the odd structure.  Hoag himself thought at first that it was a case of gravitational lensing -- the bending of light when it passes through a strong gravitational field between the emitter and observer.  Sometimes, if the heavy object causing the bending is right between the two, light passing around it gets deflected into a bullseye shape called an Einstein ring (because the great man predicted the effect before it was observed): 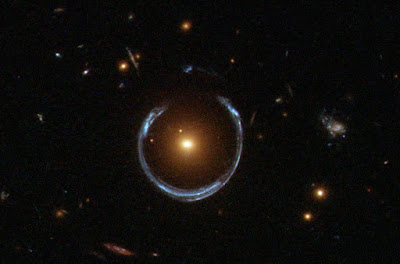 Even though the two photographs look superficially alike, the explanation was discarded when it was found that the ring of Hoag's Object showed no distortion on a smaller scale, and also the ring and the bright spot at the center had exactly the same degree of red shift, which would not be the case if the light emitted by it had passed through a strong gravitational field.

Other explanations were also proposed and discarded.  Perhaps it was caused by a collision between galaxies -- but there's no evidence of that, and the object's amazing symmetry argues against its having been the product of a chaotic merger.  Another was that it was the result of bar instability, which is when the matter distribution of a barred spiral galaxy results in a gravity field that is insufficient to keep the whole thing together, resulting in the furthest ones getting flung outward in an ever-increasing bubble.  But the almost perfectly spherical nature of the center of Hoag's Object caused astrophysicists to dismiss that explanation, too.

Long story short, we still have no idea how Hoag's Object formed, or even what exactly it is.  Other ring galaxies are known, but they're extremely rare, accounting for less than one in a thousand observed galaxies.  Another curiosity is that the stars in Hoag's Object are all very young, very hot blue-white stars -- but no one knows if that's relevant or a coincidence.

So we're left with a mystery.  I will say, however, that whatever it is, Hoag's Object is beautiful.  The idea that even our best scientists can't explain it adds to the mystique.  And it further reinforces something I've said many times; if you get interested in science, you'll never be bored.  There will always be questions to answer.