I've always had a fascination for maps, and when I was a kid spent many happy hours perusing a huge old world atlas my parents owned.

I remember how impossibly exotic a lot of those places seemed.  Some of them, too, seemed awfully oddly-shaped.  I remember being struck, for example, by the peculiar contour of the island of Celebes (now known as Sulawesi): 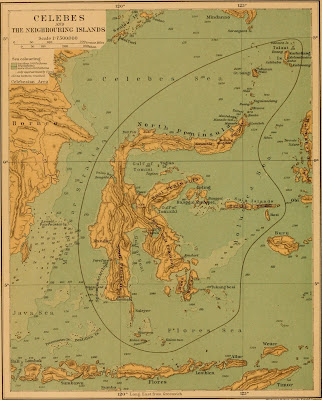 What on earth gave the place its strange shape?  I was years away from finding out about plate tectonics, seafloor spreading, and continental drift -- this would have been 1968 or so, and the seminal paper by Fred Vine and Drummond Matthews confirming the truth of plate tectonics had only been published five years earlier, so the idea had yet to make its way into elementary school science classes.

The first inkling I had that the current map of the world was only the latest of a myriad configurations that Earth's land masses had taken was when I found out about marine fossils on the top of Mount Everest and tropical fossils in Antarctica in a book I had on prehistoric life.  Everything was shifting around, apparently, in some mysterious fashion, and the familiar maps from my parents' atlas would have been completely incorrect in the past.  For example, India broke off from what is now Madagascar, sliding across the ocean on its piece of plate, and rammed into Asia only fifty or so million years ago -- which may seem like a long time, but at that point the dinosaurs had already been extinct for fifteen million years (as I always feel obliged to add, except for birds).

Still, I didn't know much in the way of details.  When I took two geology courses in graduate school, however, I hit the idea head-on, including the now-familiar idea of Pangaea -- that there was a time when all of the continents were joined into one enormous land mass.  Even more mindblowing was the fact that this wasn't the only time this had happened -- the accretion and disintegration had occurred at least three or four times before, each time ending when rifts formed and forced the place apart.

The traces of these repeated hookups and breakups are still with us.  In fact, one was just announced in a paper recently in Geology, by a team led by Adam Nordsvan of Curtin University, in which evidence was uncovered that a piece of Australia -- the region of Georgetown in far northeastern Queensland -- was actually geologically related not to the rocks immediately adjacent to it, but to rocks in (of all places) Canada.

The Canadian (or Laurentian) Shield is one of the oldest relatively unaltered blocks of rock on the Earth, of Precambrian age -- on the order of three and a half billion years old -- so to a geologist, they're pretty distinct from the geology of the nearby Mount Isa formation, which is only half that old.  (I realize how ridiculous it is to use the word "only" to describe something 1.8 billion years old, but I'm trying to think like a geologist, here.)

The coolest thing is that the piece of Canada left behind in Australia wasn't from the most recent continental pile-up, which occurred on the order of three hundred million years ago, nor even the one before that.  The most likely time that Canada and Australia were joined together was three supercontinents ago, when all the Earth's land masses were fused around a billion years ago into a huge clump called Rodinia: 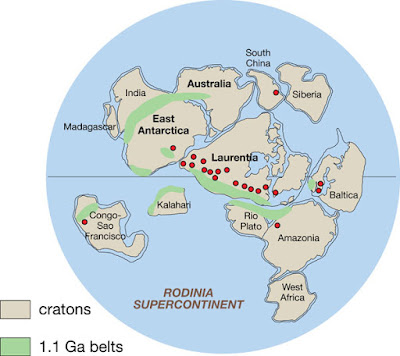 So apparently when that rifted apart, around 750 million years ago, a chunk of Canada decided to split off and ended up (literally) on the other side of the world.

The whole thing is pretty cool.  I'm still fascinated by maps in general, and thinking about what the world was like when Antarctica was in the tropics of the Northern Hemisphere and the equator cut across what is now Labrador will never fail to spark my imagination.  Add to that the bizarre thought (to me, at least) that at that point, all living things were confined to the oceans -- there was not a bug, not a worm, not so much as a sprig of moss anywhere on land, the whole place was completely devoid of life -- well, it brings to mind the line from Contact about a universe empty of all life except for us being an "awful waste of space."

Fortunately for us, though, at that point the conquest of dry land was right around the corner.

I'll end with the prescient lines from Alfred, Lord Tennyson, penned in 1849, long before continental drift was even considered:


There rolls the deep where grew the tree.
O Earth, what changes hast thou seen?
There where the long road roars has been
The stillness of the central sea;
The hills are shadows, and they flow
From form to form, and nothing stands,
They melt like mists, the solid lands,
Like clouds, they shape themselves and go.