It's funny the questions you don't think to ask.  You find out something, accept it without any objections, and only later -- sometimes much later -- you stop and go, "Wait a moment."

That happened to me just yesterday, about a topic most of us don't ponder much, and that's the peculiar astronomical object called a neutron star.  It was on my mind not by random chance -- even I don't just sit around and say, "Hmm, how about those neutron stars, anyway?" -- but because of some interesting new research (about which I'll tell you in a bit).

I first learned about these odd beasts when I took a class called Introduction to Astronomy at the University of Louisiana.  The professor, Dr. Whitmire, explained them basically as follows.

Stars are stable when there's a balance between two forces -- the outward pressure from the heat generated in the core, and the inward pull because of the gravity exerted by the star's mass.  During most of a star's life, those two are in equilibrium, but when the core exhausts its fuel, the first force diminishes and the star begins to collapse.  With small stars like the Sun, the collapse continues until the mutual repulsion of the atoms' electrons becomes a sufficient force to halt it from shrinking further.  This generates a white dwarf.

In a star between 10 and 29 times the mass of the Sun, however, the mutual electric repulsion isn't strong enough to stop the collapse.  The matter of the star continues to fall inward until it's only about ten kilometers across -- a star shrunk to the diameter of a small city.  This causes some pretty strange conditions.  The matter in the star becomes unimaginably dense; a teaspoon of it would have about the same mass as a mountain.  The pressure forces the electrons into the nuclei of the atoms, crushing out all the space, so that what you have is a giant electrically-neutral ball -- effectively, an enormous atomic nucleus made of an unimaginably huge number of neutrons. 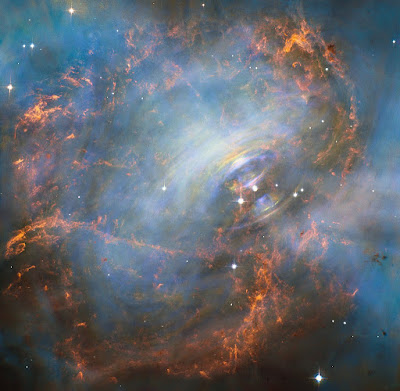 The first neutron star ever discovered, at the center of the Crab Nebula [Image is in the Public Domain, courtesy of NASA/JPL]

The immense gravitational pull means that the surface of a neutron star is the smoothest surface known; any irregularities would be flattened out of existence.  (It's worth mentioning that even the Earth is way smoother than most people realize.  The distance between the top of Mount Everest and the bottom of the Marianas Trench is less, as compared to its size, than the topographic relief in a typical scratch on a billiard ball.)

So far, so good.  But it was the next thing Dr. Whitmire told us that should have made me pull up short, and didn't until now -- forty years later.  He said that as a neutron star forms, the inward collapse makes its rotational speed increase, just like a spinning figure skater as she pulls in her arms.  Because of the Conservation of Angular Momentum, this bumps up the rotation of a neutron star to something on the order of making a complete rotation thirty times per second.  A point on the surface of a typical neutron star is moving at a linear speed of about one-third of the speed of light.

Further, because neutron stars have a phenomenally large magnetic field, this creates two magnetic "funnels" on opposite sides of the star that spew out jets of electromagnetic radiation.  And if these jets aren't aligned with the star's spin axis, they whirl around like the beams of a lighthouse.  A neutron star that does this, and appears to flash on and off like a strobe light, is called a pulsar.

This was the point when the red flags should have started waving, especially since I majored in physics and had taken a class called "Electromagnetism."  One of the first things we learned is that Scottish physicist James Clerk Maxwell discovered that magnetic fields are generated when charged particles move.  So how can a neutron star -- composed of electrically-neutral particles -- have any magnetic field at all, much less one so huge?  (The magnetic field of a typical neutron star is on the order of ten million Tesla; by comparison, one of the largest magnetic fields ever generated in the laboratory is a paltry sixteen Tesla, but was still enough to levitate a frog.)

The answer is a matter of conjecture.  One possibility is that even though a neutron star is neutral overall, there is some separation of charges within the star's interior, so the whirling of the star still creates a magnetic field.  Another possibility is that since neutrons themselves are composed of three quarks, and those quarks are charged, neutrons still have a magnetic moment, and the alignment of these magnetic moments coupled with the star's rotation is sufficient to give it an overall enormous magnetic field.  (If you want to read more about the answer to this curious question, the site Medium did a nice overview of it a while back.)

So it turns out that neutron stars aren't the simple things they appeared to be at first.  Not that this is much of a surprise -- seems like every time we answer one question in science, it generates three new ones.  What brought this up in the first place was yet another anomalous observation about neutron stars, described in a series of papers this past week in Astrophysical Journal Letters.  The conventional wisdom was that a neutron star's magnetic field would be oriented along an axis (which, as noted above, may not coincide perfectly with the star's spin axis).  This means that it would behave a bit like an ordinary magnet, with a north pole and a south pole on geometrically opposite sides.

That's what astronomers thought, until they found a pulsar with the euphonious name J0030+0451, 1,100 light years away in the constellation of Pisces.  Using the x-ray jets from the pulsar -- which should be aligned with its magnetic field -- they mapped the field itself, and found something extremely strange.

Instead of two jets, aligned with the poles of the magnetic field, J0030+0451 has three -- and they're all in the southern hemisphere.  One is (unsurprisingly) at the southern magnetic pole,  but the other two are elongated crescents at about sixty degrees south latitude.

To say this is surprising is an understatement, and the astronomers are still struggling to explain it.

"From its perch on the space station, NICER [the Neutron star Interior Composition Explorer] is revolutionizing our understanding of pulsars," said Paul Hertz, astrophysics division director at NASA Headquarters in Washington.  "Pulsars were discovered more than fifty years ago as beacons of stars that have collapsed into dense cores, behaving unlike anything we see on Earth."

It appears that we still have a way to go to fully explain how they work.  But that's how it is with the entire universe, you know?  No matter where we look, we're confronted by mysteries.  Fortunately, we have a tool that has proven over and over to be the best way of finding answers -- the collection of protocols we call the scientific method.  I  have no doubt that the astrophysicists will eventually explain the odd magnetic properties of pulsars.  But the way things go, all that'll do is open up more fascinating questions -- which is why if you're interested in science, you'll never run out of things to learn.