The meaning of love

There's no denying that as careful as we try to be, language can be ambiguous.  One of the first things I used to do with my Critical Thinking classes was to get them to think about how terms are defined, and how that can change the meaning of what someone says or writes -- sometimes causing serious misunderstandings.  They start with a list of words -- love, evil, truth, beauty, loyalty, jealousy, and so on -- and first try to define them on their own, then for each one, come up with a word that's a synonym but has a differing emotional weight.  Then they compare their answers to their classmates'.

The results are eye-opening.  Not only do the definitions differ wildly, when they try to come up with synonyms, there is a huge variety of suggestions, many of which don't carry the same connotations at all.  For evil I've had students with bad, wrong, hateful, destructive, wicked, immoral, sinister, and despicable -- which themselves carry drastically different meanings.

And that's for just one word.  By the time we're done with the whole exercise, they have a pretty good idea why misunderstandings are so common.

A study that came out yesterday in Science adds a new layer of complication to the situation.  Apparently the connotations of emotionally-laden words differ greatly between languages.  So if you look up how to translate the word love into Latvian, you'll certainly find a corresponding word -- but the associations that a native speaker of Latvian has with the word might differ greatly from yours.

The paper was entitled, "Emotion Semantics Show Both Cultural Variation and Universal Structure," and was the work of a team of linguists, neuroscientists, psychologists, and mathematicians led by Joshua Conrad Jackson of the University of North Carolina at Chapel Hill.  What they did was to use a statistical model to create networks of words that had associations with each other, for no less than 2,474 languages from twenty different language families.

The results were fascinating.  The authors write:


[W]e take a new quantitative approach to estimate variability and structure in emotion semantics.  Our approach examines cases of colexification, instances in which multiple concepts are coexpressed by the same word form within a language.  Colexifications are useful for addressing questions about semantic structure because they often arise when two concepts are perceived as conceptually similar.  Persian, for instance, uses the word-form ænduh to express both the concepts of “grief” and “regret,” whereas the Sirkhi dialect of Dargwa uses the word-form dard to express both the concepts of “grief” and “anxiety.”  Persian speakers may therefore understand “grief” as an emotion more similar to “regret,” whereas Dargwa speakers may understand “grief” as more similar to “anxiety.”

It takes long enough to become fluent in a second language; how much longer would it take to understand all of the subtle connotations of words?  Even if you're using the "right word" -- the one a native speaker would use -- you might still misjudge the context unless you had a deep understanding of the culture.


Here are four examples of their linguistic networks: 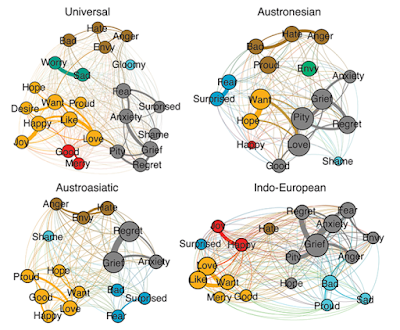 The most interesting thing I noticed about these maps was the placement of the word anger.  In Austronesian languages, anger connects most strongly to hate; in Austroasiatic languages, to envy; and in Indo-European languages, to anxiety.  I can only imagine the misunderstandings that would occur if a speaker of a language from one of those families was speaking to a speaker of a language from another, and said something as simple as, "I am angry with you."

Another curious example is the familiar Hawaiian word aloha, which is usually translated into English as love.  The researchers found that to a native speaker of Hawaiian, aloha does mean love, but it is strongly connected with a word that is surprising to English speakers; pity.  The meaning of love, which is supposed to transcend all cultural barriers somehow, is apparently not as uniform across languages as one might expect.

Questions about the meaning of human emotions are age-old, and debate about the nature of emotion persists in scientific literature...  Analyzing these networks sheds light on the cultural and biological evolutionary mechanisms underlying how emotions are ascribed meaning in languages around the world.  Although debates about the relationship between language and conscious experience are notoriously difficult to resolve, our findings also raise the intriguing possibility that emotion experiences vary systematically across cultural groups...  Analyzing the diverse ways that people use language promises to yield insights into human cognition on an unprecedented scale.

And considering how interlinked our societies are across the globe, anything we can do to foster deeper understanding is worth doing.