I don't have a lot of patience for the cynical, pessimistic attitude I hear from people who otherwise I generally agree with, that often takes the form of "humans are garbage" or "I hate people."

Usually, these comments come from righteous outrage at the capacity of some people for committing horrifying acts.  Abuse of children and animals, violence motivated by racism, religion, and homophobia, victim-blaming or outright dismissal in cases of rape and spousal violence -- we're right to be disgusted by these.

But concluding that all humans are worthless is tantamount to giving up.  And that's unacceptable.  There's too much at stake, especially now.

I understand that it seems like an uphill battle, and that the moral people of the world -- who, I maintain, are the majority, regardless of how it may seem at times -- get exhausted by what seems like an endless fight that never makes any serious headway.

In fact, I have to admit to having a moment like this yesterday morning, when I read that the Ninth Circuit Court of Appeals has ruled to dismiss the lawsuit Juliana vs. United States, nicknamed the "Children's Climate Lawsuit."  Filed by a group called Our Children's Trust, this lawsuit aimed to hold the government of the United States responsible for their inaction on climate change, thereby endangering children's chances of living to adulthood in a world that is environmentally stable.

Most of us -- although admittedly not legal scholars -- looked at this and said, "Well, yeah."  The Declaration of Independence calls life, liberty, and the pursuit of happiness "inalienable rights," which would seem to me that this makes it incumbent upon our government not to render the place uninhabitable. 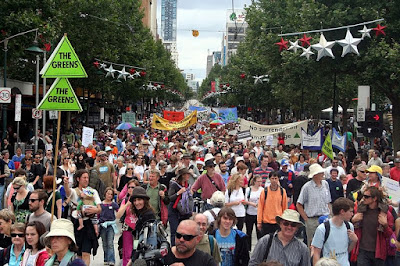 The Ninth Circuit Court disagreed.  In the majority opinion, Judge Andrew Hurwitz wrote, "The central issue before us is whether, even assuming such a broad constitutional right exists, an Article III court can provide the plaintiffs the redress they seek—an order requiring the government to develop a plan to 'phase out fossil fuel emissions and draw down excess atmospheric CO2.  Reluctantly, we conclude that such relief is beyond our constitutional power. Rather, the plaintiffs’ impressive case for redress must be presented to the political branches of government."

The "reluctance" Hurwitz feels evidently wasn't enough to stop him from saying "Not It" when it came to drawing a line in the sand with regards to our wanton environmental destruction, something that has gotten significantly worse under Trump's administration.  No environmental legislation has been safe -- from water and air quality, to protections for endangered species, to the shielding of public land from damage from mining, logging, and oil drilling.  The motto of our government is "Use it all up and fuck the consequences," with the attitude being "Oh, well, we'll all be dead by the time bad stuff happens, may as well cut loose and party hard now."

So I'm inclined to look at Hurwitz's reluctance as a little like Maine Senator Susan Collins's approach to standing up to Donald Trump and Mitch McConnell.  "Yes, I'll give it serious consideration," she says, then proceeds to rubberstamp everything Trump and McConnell want.

But she always makes a sad frowny face while she's doing it to show how reluctant she is, and that makes it all okay.

In the dissenting opinion, Judge Josephine Staton couldn't have said it clearer.  "Plaintiffs bring suit to enforce the most basic structural principle embedded in our system of ordered liberty: that the Constitution does not condone the Nation’s willful destruction."

So that's another avenue closed by someone's desire not to be the one to make a stand.  Like I said, it's not that I don't get how hard that is.  Facing down a fierce and relentless opposition, and continuing to fight despite setback after setback, is mentally and physically exhausting.  It's why I have nothing but admiration for people like my dear friend Sandra Steingraber, who has been fighting for the environment and the global climate literally for decades, and somehow manages the wherewithal to keep going despite what sometimes seem monstrous odds.

"Fortunately, there are people who will not be deterred from the work of civilization," journalist Bill Moyers said, "who will even from time to time go up against authority in peaceful disobedience, taking a nonviolent stand for a greater good.  Such a person is Sandra Steingraber."

Or as Sandra herself wrote in 2014 from the Chemung County (New York) Jail, where she was serving a sentence for her civil disobedience, "Five days without clouds, sky, stars, leaves, birdsong, wind, sunlight, and fresh food has left me homesick to the point of grief.  I now inhabit an ugly, diminished place devoid of life and beauty – and this is exactly the kind of harsh, ravaged world I do not want my children to inhabit."

So after the defeat dealt to us all by the Ninth Circuit Court's decision, we stand up, dust ourselves off, and keep going.  I'm not going to fall back into the "humans are horrible and deserve everything we get" attitude, which seems to me to be nothing more than an excuse for inaction.  I know too many moral, kind, compassionate, and loving humans for me to accept that and give up.  We're going through a difficult time right now -- a world teetering on the edge of climate chaos, an environment slipping back into the pre-regulation ravages of pollution and overuse, and a government made of lying grifters who believe in power and personal profit über alles.

But I am buoyed up by realizing that we can only continue to do what we've done, fighting the daily battles with what spirit we can, and not despairing because of the size of the task ahead -- or its gravity.  I'm reminded of the wonderful quote from J. R. R. Tolkien's Return of the King: "It is not our part to master all the tides of the world, but to do what is in us for the succour of those years wherein we are set, uprooting the evil in the fields that we know, so that those who live after may have clean earth to till.  What weather they shall have is not ours to rule."

And, perhaps even more hopefully, the poignant line from Stephen King's The Stand, spoken by Nadine Cross to Randall Flagg himself (talk about speaking truth to power!):  "The effective half-life of evil is always relatively short."