That we live in contentious times is so blatantly obvious it's kind of silly even to point it out.

Politics.  Immigration.  LGBTQ rights.  Climate change.  Religion, and its influence on public policy.  Discrimination.  Gun laws.  Poverty and homelessness.  The list of topics to argue about seems endless, as does the vitriol they engender.  A number of people I know look upon the holidays with dread, because of the potential to bring together family members with diametrically opposite opinions -- making the conditions right for turning Thanksgiving dinner into a conflagration.

Avoiding the topics, of course, strikes a lot of people as cowardly, especially when the topics themselves are of such critical importance.  We're not talking goofy arguments about trivia, like the time a friend of mine and I got in a heated debate over which Olympic sport was silliest, short-track speed skating or curling.  (The answer, obviously, is curling.  Not that I could get him to admit that.  Unfortunately, the most our argument accomplished was getting long-suffering eyerolls from both of our wives, and some sotto voce discussion between the two of them about how they ended up paired with the likes of us.)

But here, the stakes are much higher.  We argue because we feel strongly that the outcome is vitally important.  And because of this, we often adopt an argue-to-win stance -- feet planted firmly, unwilling to give an inch or accede to any suggestion that our opponents might have some points on their side.

The problem is -- and I think most people could affirm that anecdotally from their own experience -- this approach has a very poor success rate.  How often has the fight on Christmas Eve between liberal, tree-hugging Cousin Sally and conservative, Trump-supporting, Fox-News-watching Uncle Jake actually resulted in either of them changing their views?  About anything?  Yes, I think it's important to stand your ground and fight for what you believe in, but maybe it's time to admit that the approach most people take isn't working. 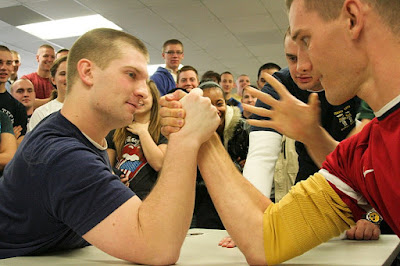 That's the gist of some research published this week in Cognitive Science.  In "The Influence of Social Interaction on Intuitions of Objectivity and Subjectivity," by Matthew Fisher, Joshua Knobe, and Frank C. Keil (of Yale University), and Brent Strickland (of the École Normale Supérieure), we learn that a lot more could be accomplished if instead of an argue-to-win strategy, we adopted an argue-to-learn approach.

The researchers paired people up based on their having opposing opinions about a variety of controversial topics.  The members of one group of pairs were instructed to interact with their partners with an argue-to-win approach -- to justify their own position and to try to argue their points as objectively and convincingly as they could, and were told they would be graded on their success at convincing their partners of the error of their ways.  The members of the other group of pairs were instructed to use an argue-to-learn approach -- they were told they'd be paired with people of opposing viewpoints, but the task was to learn as much as they could about the reasoning behind their partner's opinions, and to be able to then articulate it coherently afterward.

Neither group of participants knew that the mode of argument was going to be different between different pairs -- they only knew what their own task was.  And in order to make sure that the experiment was controlled, the researchers took the extra step of having independent raters evaluate the pairs on how well they'd fulfilled the requirements of their tasks, to make certain that by random chance the argue-to-win group wasn't populated with combative types and the argue-to-learn group with peaceniks.

Afterward, test subjects were given a set of questions to determine their attitudes about there being an objective correct answer to every dilemma.  The questions included, "Given that most issues have more than one side, it is inevitable that one must be correct and the others wrong," and "Even if someone disagrees with me, (s)he has rational reasons for doing so."

Interestingly, just the task of being forced for four minutes into adopting either a no-quarter-given approach or a let's-listen-to-each-other approach created a marked difference between how participants answered the questionnaire.  The argue-to-win group were much more likely to agree with statements suggesting there was one objective correct answer, and that anyone not believing that answer were simply wrong; the argue-to-learn group were more likely to agree with statements implying that truth was nuanced, and that people of opposing opinions aren't necessarily ignorant or irrational.

So if you want to sway people, the way to do it is not through verbal fisticuffs; it's through listening to the other side's reasons and making it clear you want to learn more about their arguments, not batter them down with your own.

Now, understand that I'm not trying to say -- and neither were the researchers -- that there aren't objective truths and moral absolutes out there, or that everything is on that mushy ground of subjectivity.  Climate change deniers and young-Earth creationists are simply factually wrong.  People who support discrimination on the basis of race or sexual orientation are espousing an inherently immoral stance.  But there are a lot of ways even to approach these topics without a knock-down-drag-out fight.  Even if climate change itself is undeniable, what (if anything) we can or should do about it is certainly up for discussion.  And perhaps it might be more successful to tackle the issues of racism and misogyny and homophobia not by wavering in our own conviction to do what is right and moral, but to find out why our opponents believe what they do.  When someone shouts, "All liberals are America-haters who want to destroy our country," it might be better to say, "I'm a liberal and I don't think that.  Why do you say all liberals think that way?" rather than "Oh, yeah?  Well, you're an ignorant hate-monger!"

Not that the latter is necessarily false, just that pointing it out doesn't accomplish anything.

So that's the latest on how to keep arguments from going thermonuclear, and maybe even convincing some folks to rethink their views at the same time.  Heaven knows with the increasing polarization in the world, and the news media and pundits feeding into that every chance they get, we need to stop and listen to each other more often.

And even if the two of you leave with your views substantially unchanged, who knows?  Maybe both of you will have learned something.

Posted by Gordon Bonnet at 3:02 AM