This week we've been looking at some pretty deep topics, such as the effects of dark matter on star position in the Milky Way, what causes some plants to be essentially immortal, and the discovery of mineral grains that predate the Earth's formation.  So it seems fitting to address next something that is, I'm sure, on all of your minds, namely: what do I do if my house is occupied by an evil djinn?

The djinn, sometimes spelled "jinn" or anglicized as "genie," are spirits who you find in Middle Eastern mythology.  While people who are in the know about such things make it clear that djinns are not inherently good or evil, they have the tendency to be swayed toward the evil side of things.  Muhammad supposedly was sent not only to bring the word of Allah to humans but to the djinn as well, but even so they have a reputation for having some seriously ill will toward the rest of us.  Folk tales from that region are rife with djinn living in "unclean places" and possessing humans (the outcome is seldom good).

So pretty clearly, this is a group of beings we should all be on the lookout for.  This is where a guy named Saad Ja'afar comes in.  Because he is the world's foremost -- perhaps the world's only -- professional djinn trapper.

My first thought on reading this was to say, "um... his name is... Ja'afar?  You have got to be making this up."  Because any of you with children will undoubtedly know that this is the name (although usually spelled "Jafar") of the evil Grand Vizier in Aladdin.  But apparently yes, the djinn trapper is indeed Saad Ja'afar, and his business (Pakar Tangkap Jin), based in Johor Bahru, at the southern tip of Malaysia, is who you want to contact if you're being bothered by scary blue guys who live inside lamps. 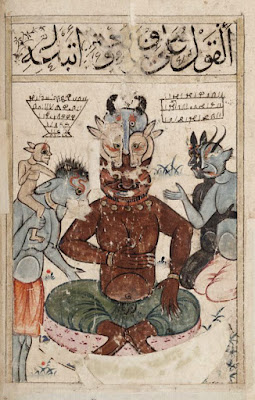 Zawba'a, one of the kings of the djinn, with some of his attendant djinn servants.  Which brings up the question of why so many of them are blue.  Are they cold?  Maybe they should try putting some clothes on. (From a late 14th century Arabic manuscript) [Image is in the Public Domain]

As far as Ja'afar goes, his rates are pretty reasonable.  For one djinn removal, he charges 200 ringgit ($48.75 at current exchange rates), and he can even work remotely.  "I don’t have to physically be there at the location to catch the ghost," Ja'afar says.  "Before this, the farthest I’ve captured a djinn was at Sabah.  We keep the spirit and djinn close to the mosque to encourage it to repent."

It bears mention that Sabah isn't exactly right next door to Johor Bahru.  The only way to get from one to the other is via a two-hour flight.  So it's just as well he can trap troublesome djinn without leaving the comfort of his home.  I wouldn't want him to have to fly all the way to upstate New York if we were having djinn trouble, because I did that flight before and it was kind of miserable.  Kuala Lumpur to New York City was a sixteen-hour flight, meaning you could watch a long movie, sleep for six hours, and you'd still have seven hours left to go.

I have never been so glad to get off an airplane in my life.

Anyhow, Ja'afar has a Facebook page (because of course he does), and on it he has accounts of his successful captures, including a spirit-realm battle he got in with a bomoh, a Malaysian shaman, who brought a djinn back into a house he'd just cleared.  I can understand how frustrating this must have been.  I face that all the time with my dogs tracking in mud on floors I just cleaned, and they're not even doing it using magic.

Apparently, once Ja'afar captures the djinn, he imprisons it in a bottle, which I guess makes sense given the whole genie-in-a-lamp thing.  So it seems like he's got quite a lucrative racket going.  He never has to leave his house, and all he needs is a supply of glass bottles and corks and a good schtick to tell his customers about how dire the battle was, but he was victorious and the djinn is vanquished, and he gets paid.

Almost makes me wish I had thought of it first.