Today's topic in Skeptophilia isn't controversial so much as it is amazing.  And shows us once again what a weird, endlessly fascinating universe we live in.

First, though, a bit of a science lesson.

A great many processes in the natural world happen because of the Second Law of Thermodynamics.  The Second Law can be framed in a variety of ways, two of which are: (1) heat always tends to flow from a hotter object to a colder one; and (2) in a closed system, entropy -- disorder -- always increases.  (Why those are two ways of representing the same underlying physical law is subtle, and beyond the scope of this post.)

In any case, the Second Law is the driver behind weather.  Just about all weather happens because of heat energy redistribution -- the Sun warms the ground, which heats the air.  Hot air tends to rise, so it does, drawing in air from the sides and creating a low pressure center (and wind).  As the warm air rises, it cools (heat flowing away from the warmer blob of air), making water vapor condense -- which is why low pressure tends to mean precipitation.  Condensation releases heat energy, which also wants to flow toward where it's cooler, cooling the blob of air (which is also cooling because it's rising and expanding).  When the air cools enough, it sinks, forming a high pressure center -- and on and on.  (Circular air movement of this type -- what are called convection cells -- can be local or global in reach.  Honestly, a hurricane is just a giant low-pressure convector.  A heat pump, in essence.  Just a fast and powerful one.)

Okay, so that's the general idea, and to any physicists who read this, I'm sorry for the oversimplifications (but if I've made any outright errors, let me know so I can fix them; there's enough nonsense out there based in misunderstandings of the Second Law that the last thing I want is to add to it).  Any time you have uneven heating, there's going to be a flow of heat energy from one place to the other, whether through convection, conduction, or radiation.

But if you think we get some violent effects from this process here on Earth, wait till you hear about KELT-9b.

KELT-9b is an exoplanet about 670 light years from Earth.  But it has some characteristics that would put it at the top of the list of "weirdest planets ever discovered."  Here are a few:
So the conditions on this planet are pretty extreme.  But as I found out in a paper by Megan Mansfield of the University of Chicago et al. that appeared in this week's Astrophysical Journal Letters, even knowing all that didn't stop it from harboring a few more surprises. 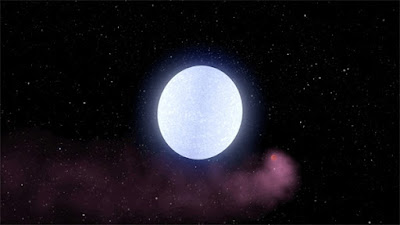 Tidally-locked planets are likely to have some of the most extraordinary weather in the universe, again because of effects of the Second Law.  Here on Earth, with a planet that rotates once a day, the land surface has an opportunity to heat up and cool down regularly, giving the heat redistribution effects of the Second Law less to work with.  On KELT-9b, though, the same side of the planet gets cooked constantly, so not only is it really freakin' hot, there's way more of a temperature differential between the light side and the dark side than you'd ever get in our Solar System (even Mercury doesn't have that great a difference).

So there must be a phenomenal amount of convection taking place, with the atmosphere on the light side convecting toward the dark side like no hurricane we've ever seen.  But that's where Mansfield et al. realized something was amiss.  Because to account for the temperature distribution they were seeing on KELT-9b, there would have to be wind...

That seemed physically impossible, so there had to be some other process moving heat around besides simple convection.  The researchers found out what it is -- the heat energy on the light side is sufficient to tear apart hydrogen molecules.

At Earth temperatures, hydrogen exists as a diatomic molecule (H2).  But at KELT-9b's temperatures, the energy tears the molecules into monoatomic hydrogen, storing that as potential energy that is then rereleased when the atoms come back together on the dark side.  So once again we're talking the Second Law -- heat flowing toward the cooler object -- but the carrier of that heat energy isn't just warm air or warm water, but molecules that have been physically torn to shreds.

So, fascinating as it is, KELT-9b would not be the place for Captain Picard to take his away team.  But observed from a distance, it must be spectacular -- glowing blue-white from its own heat, whirling around its host star so fast its year is one and a half of our days, one side in perpetual darkness.  All of which goes to show how prescient William Shakespeare was when he wrote, "There are more things in heaven and Earth, Horatio, than are dreamt of in your philosophy."