You've all heard of dark matter, the strange stuff that comprises 85% of the total matter in the universe and about a quarter of its overall mass-energy, and the nature of which -- although its presence has been shown in a variety of ways -- we're no nearer to understanding than we were when investigations of galactic rotation rates demonstrated its existence to astronomer Vera Rubin in 1978 (as I mentioned in yesterday's post).

Less well-known, and even more mysterious, is dark energy.  It's a little unfortunate the monikers of these two strange phenomena sound so similar, because dark energy is entirely different from dark matter (both obtained the sobriquet "dark" mainly because they've resisted all methods for direct detection, so we still have not a damn clue what they are).  Dark energy is a peculiar (hypothesized) form of energy that permeates all of space, and is responsible for the observation that the rate of expansion of the universe is accelerating.  Dark energy, whatever it is, acts on matter as if something were pushing it, working opposite to the pull of gravity that otherwise would cause the expansion to reverse eventually, ending the universe in a "Big Crunch."

Oh, and whatever it is, looks like it's common.  Measurements based on the expansion rate of the universe put estimates in the range of 68% of the total mass-energy of the universe.  So that places ordinary matter and energy -- the kind we are made of and interact with on a daily basis -- at a mere 7% of the stuff in the universe.

Kind of humbling, isn't it?  If the data are correct, 93% of the mass-energy of the universe is made up of stuff we can't detect and don't understand. 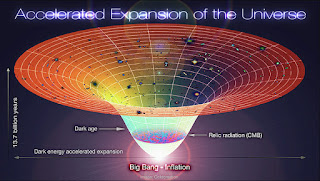 Well, maybe.  According to a press release two days ago from Yonsei University (Seoul, South Korea), scientists at the Center for Galaxy Evolution and Research are suggesting that the foundational assumption that led to the "discovery" of dark energy may simply be wrong.

I'm no astrophysicist, so I won't try to summarize the press release, but simply quote the salient paragraphs:


The most direct and strongest evidence for the accelerating universe with dark energy is provided by the distance measurements using type Ia supernovae (SN Ia) for the galaxies at high redshift.  This result is based on the assumption that the corrected luminosity of SN Ia through the empirical standardization would not evolve with redshift.

New observations and analysis made by a team of astronomers at Yonsei University (Seoul, South Korea), together with their collaborators at Lyon University and KASI, show, however, that this key assumption is most likely in error.  The team has performed very high-quality (signal-to-noise ratio ~175) spectroscopic observations to cover most of the reported nearby early-type host galaxies of SN Ia, from which they obtained the most direct and reliable measurements of population ages for these host galaxies.  They find a significant correlation between SN luminosity and stellar population age at a 99.5% confidence level.  As such, this is the most direct and stringent test ever made for the luminosity evolution of SN Ia.  Since SN progenitors in host galaxies are getting younger with redshift (look-back time), this result inevitably indicates a serious systematic bias with redshift in SN cosmology.  Taken at face values, the luminosity evolution of SN is significant enough to question the very existence of dark energy.  When the luminosity evolution of SN is properly taken into account, the team found that the evidence for the existence of dark energy simply goes away.

I don't know about you, but I read this with my mouth hanging open.  The idea that 68% of the mass-energy density of the universe could disappear if you alter the assumptions came as a bit of a shock.

It probably shouldn't have, of course, because this sort of thing has happened before.  There was phlogiston (the mysterious substance inherent in combustible matter) and the luminiferous aether (the mysterious substance through which light propagates in the vacuum of space), both of which turned out to be not so much mysterious as nonexistent.  Both of these vanished when the baseline assumptions changed -- in the first case, when a good theory of chemical energy was developed, and in the second when Einstein showed that light didn't act like an ordinary wave.

And honestly, even if I'm shocked by the way the dark energy scenario is playing out, I've been half expecting something like this to happen.  A physicist friend of mine was chatting with me one day about dark matter and dark energy (as one does), and she said that just like the aether stuck around until Einstein came and blew away the need for it by changing the perspective, the same would happen with the strange and undetectable dark matter and dark energy.

"We're just waiting for this century's Einstein," she said.

But it seems like it might not even require something as groundbreaking as a Theory of Relativity, here, at least in the case of dark energy.  All it might take is reevaluating the data on supernova luminosity to remove the need for the hypothesis.

Also would explain why we haven't detected it.

But this, like any scientific claim, is bound to be challenged, especially consider that it's nixing 68% of the universe in one fell swoop.  So keep your eyes on the physics journals -- I'm sure you haven't heard the last of this.

And you can count on the new research casting some light on the darkness -- whatever the ultimate outcome.