When I was about twelve, I was lying on the sofa in my living room one evening watching a horror movie called Gargoyles.

From the perspective of a few more decades of living, I can say now that Gargoyles was a pretty derpy movie.  The general gist was that the people who put gargoyle statues on Gothic cathedrals were sculpting from life, and that all over the world there were caves occupied by the great-great-great-etc. grandchildren of those medieval monsters.  So of course there's the intrepid scientist character who is convinced that gargoyles exist but can't get his supervisors to believe him, but he goes and investigates them anyhow, and in the process hits one of them with his pickup truck.  (The gargoyles, not his supervisors.) 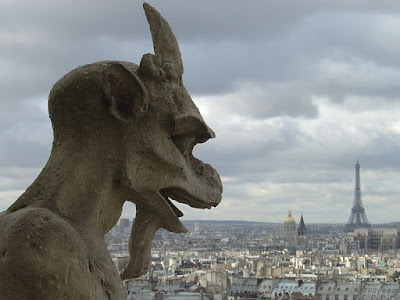 Well, the scientist is just thrilled by this development.  He thinks, "Wow, now I have proof!", loads the deceased gargoyle into his truck, and then stops at a motel for the night.  Then he does what you would do if you had never ever ever watched a horror movie in your life, namely: he decides that he can't leave a gargoyle corpse in the open bed of his pickup truck in the parking lot of a motel, so he drags it into the room with him.

He gets undressed for bed, turns out the lights, and -- of course -- it turns out the gargoyle isn't dead.  There's a soft, stealthy noise, and then a vaguely humanoid-shaped shadow rises, looming over the foot of the sleeping scientist's bed.

This was when my father, who was sitting in the recliner next to the couch, reached out and grabbed my shoulder and yelled, "THERE'S ONE NOW!"

After he peeled me off the ceiling with a spatula and my heart rate began to return to normal, I at least was thankful that I hadn't pissed my pants.  It was a close-run thing.

It's a wonder that I actually watch horror movies at all, because I am seriously suggestible.  When the movie The Sixth Sense first was released on DVD, my girlfriend (now wife) and I watched it at her house.  Then I had to make a forty-five minute drive, alone in my car at around midnight, then go (still alone) into my cold, dark, empty house.  I might actually have jumped into bed from four feet away so the evil little girl ghost wouldn't reach out from underneath and grab my ankle.  I also might have pulled the blankets up as high over me as I could without suffocating, following the time-tested rule that monsters' claws can't pierce a down comforter.

So yeah.  I might be a skeptic, but I am also a great big coward.

This was why I found some research that was published in the journal Neuroimage last week so fascinating.  It comes out of the University of Turku (Finland), where a team led by neuroscientist Lauri Nummenmaa had people watching movies like The Devil's Backbone and The Conjuring while hooked to an fMRI scanner.

They had participants (all of whom said they watched at least one horror movie every six months) rate the movies they watched for suspense and scariness, count the number of "jump scares," and evaluate their overall quality.  The scientists then looked at the fMRI results to see what parts of the brain were active when, and found some interesting patterns.

As the tension is increasing -- points where you're thinking, "Something scary is going to happen soon" -- the parts of the brain involved in visual and auditory processing ramp up activity.  Makes sense; if you were in a situation with real threats, and were worried about some imminent danger, you would begin to pay more attention to your surroundings, looking for cues to whether your fears were justified.  Then at the moment of jump scares, the parts of the brain involved in decision-making and fight-or-flight response spike in activity, as you make the split-second decision whether to run, fight the monster, or (most likely in my case) just have a stroke and drop dead on the spot.

Nummenmaa and his team found, however, that all through the movie, the sensory processing and rapid-response parts of the brain were in continuous cross-talk.  Apparently the brain is saying, "Okay, we're in a horror movie, so something terrifying is bound to happen sooner or later.  May as well prepare for it now."

What I still find fascinating, though, is why people actually like this sensation.  Even me.  I mean, my favorite Doctor Who episode -- the one that got me hooked on the series in the first place -- is the iconic episode "Blink," featuring the terrifying Weeping Angels, surely one of the scariest fictional monsters ever invented. 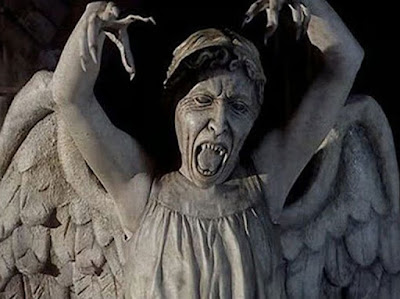 Maybe it's so when the movie's over, we can reassure ourselves that we might have problems in our lives, but at least we're not being disemboweled by a werewolf or abducted by aliens or whatnot.  I'm not sure if this is true for me, though.  Because long after the movie's over, I'm still convinced that whatever horrifying creature was rampaging through the story, it's still out there.

And it's looking for me.

So maybe I shouldn't watch scary movies.  It definitely takes a toll on me.  And that's even without my practical joker father scaring me out of five years of my life expectancy when the monster appears.