One of the simplest, but one of the most mind-blowing, concepts in science is that matter is recycled indefinitely.

It came up in a variety of ways in my biology classes, most frequently because of the water cycle, nitrogen cycle, and carbon cycle.  I always told my classes, "Every drop of water in your body has been in many forms.  It's been in clouds, it's been in rain, polar ice, the oceans and lakes.  It's been tree sap, bird blood, and dinosaur piss.  It never is created or destroyed, it just keeps getting reused."

This recycling, however, does make certain things hard to study, because the process of the recycling often erases where those molecules had been before and what they'd been doing.  This is most obvious in geological cycles.  When a geologist says, "This rock is recent, it was formed only a few hundred years ago," or "this is an ancient rock dating back to around eight hundred million years ago," (s)he is not talking about the materials; the materials, for the most part, all ended up on Earth at around the same time.  (Exceptions are meteorites, which will come up again shortly.)  The materials that make up yesterday's cooled lava rock and the rock of the Precambrian-Age Laurentian Shield of Canada are the same age; what's different is when the last event occurred that modified them enough to erase their previous history.

Because those history-erasing processes are happening all the time, this makes it difficult to find rocks that are over a billion years old, because the likelihood of a rock surviving unmelted all that time is virtually nil.  This makes our knowledge of the geological history of the Earth sketchier and sketchier the further back in time we go, and honestly, any models we have about the position of the continents and their relationships to the current configuration pretty quickly devolve into pure speculation much earlier than the Cambrian Period -- meaning that 7/8 of the entire history of the Earth is pretty much uncharted territory, geologically-speaking.

All of this is why it was quite a shock when I found out, from a paper in Proceedings of the National Academy of Sciences this week, that a rock has been found containing grains that date from between five and seven billion years ago, and some may be older than that. 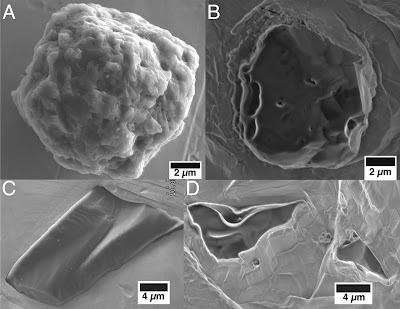 Electron micrographs of presolar grains from the Murchison meteorite [Image by Philipp R. Heck, et al., of the University of Chicago]

If you're saying, "Wait, isn't that older than the Earth?", the answer is "yes."  The Earth's surface cooled and became solid on the order of 4.6 billion years ago.  So how can this possibly be correct?

The grains, it turns out, are part of a space rock called the Murchison meteorite that landed in Australia in 1969, so while everything on Earth was getting melted down, smashed, and mixed around, the rock of the Murchison meteorite was safely out in space, preserving the interior as a sort of time capsule of the very early Solar System.  These "presolar grains" of silicon carbide were dated using known conversion rates of the component atoms to other elements from interacting with cosmic rays, in some cases giving ages that are about as old as the Sun itself.

As far as how this can be, it bears keeping in mind that the Sun itself is thought to be a "third-generation star," so therefore nowhere near as old as the Universe as a whole.  The earliest stars were composed solely of hydrogen (and helium, as the hydrogen fuel was consumed), and heavier elements formed in the death throes of those stars.  The heaviest elements all were formed in supernovas, so any star enriched in these elements -- as our Sun is -- must contain materials from at least one, probably more, previous generations of stars.

So these silicon carbide grains were formed from atoms generated in stellar furnaces that predated the Sun (thus their name, "presolar grains"), and were floating around in interstellar space for all that time until a chunk of them happened to discover that Australia was in the way.  Fortunately for us; it gives us a chance to see materials about as old as you could find anywhere -- dating back to a time when the Solar System was still a ring of coalescing debris around a very young star.