This week in lunacy

Is it just me, or have the evangelicals as a group completely lost their damn marbles?

I was a college student in the height of Jerry Falwell Sr.'s "Moral Majority," when the elder Falwell made the case that the United States had gone off the rails morally.  Unsurprisingly, given the Religious Right's continual obsession with what people do with their naughty bits, a lot of it had to do with the acceptance of LGBTQ individuals and the increase in swearing and sex in movies and television.

But at least it was consistent, and (on some level) reality-based.  LGBTQ individuals were gaining a greater voice, and there was more edgy stuff coming out of Hollywood.  A lot of us, myself included, had no real problem with that -- I've always wondered why in film ratings, nudity and sex were equated with violence and gore, as if a naked human body was as horrifying as a dismembered one -- so I disagreed with their assumptions.  But the definition of morality Falwell and others were pushing at least didn't seem to be coming from some sort of bizarre fever-dream.

Which is more than I can say from today's evangelicals.  Here's a sampler of rants from prominent spokespeople on the Religious Right, just in the last week:
That's in the last week.

The craziness gets passed along to the followers.  Just a couple of days ago, a woman in Pennsylvania named Nadedja Reilly drove her car into oncoming traffic to "test her faith."  She herself wasn't hurt (hallelujah) but two people in other cars were, something that didn't bother her in the least.  "Reilly related God took care of her by not having her injured," wrote Trooper Bruce Balliet in the arrest affidavit. "Reilly expressed no concerns or remorse for the victims.  Reilly also stated she did not care if the other people were injured because God would have taken care of them." 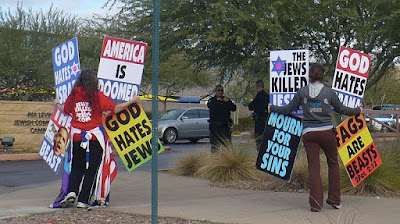 [Image licensed under the Creative Commons HoppingRabbit34 at English Wikipedia, Baptists-against-jews, CC BY 3.0]

If it's not clear from what I've written already, yes, I know it's not all Christians.  I have a great many Christian friends of various denominations, and I'm sure they'd be as appalled as I am at all this.  But my point is that in the last couple of years events have revealed a deep streak of batshit lunacy in the Religious Right, beyond the intolerance, self-righteousness, and homophobia that has been evident for as long as I can remember.  And all too few people recognize this as the same kind of insane extremism and disconnect from reality that exists in radical Islam -- despite the fact that many of the same people who love Pence and Wiles and Bakker et al. consider the outrageous, bigoted, and violent statements made by fundamentalist Muslim spokespeople to be deeply and thoroughly evil.

Maybe they should reread the injunction from Matthew 7 to remove the beam from your own eye before you attempt to pluck the splinter from your neighbor's.  Or the message to the Pharisees -- the Religious Right of Jesus's time -- in Matthew 23, where Jesus referred to them as a "brood of vipers" for their pious, hypocritical self-righteousness.

None of that seems to occur to them.  A selective reading of the bible is also one of their specialties.

It's all very well to laugh at these people; Bakker in particular is so out in left field that he's almost begging to be ridiculed.  But there's the danger that if we poke fun at them, we lose sight of two facts: (1) they're completely serious; and (2) they have a great many followers who believe every word they say.

How to fight against this, I have no idea.  Knowing about it is a start, which is why I'm writing this today.  But that gets us no closer to eliminating this frightening streak of fanaticism that seems to be getting louder and louder.  It puts me in mind of the quote, often misattributed to Sinclair Lewis (its actual provenance is unknown): "When fascism comes to America, it will be wrapped in the flag and carrying a cross."

Posted by Gordon Bonnet at 5:01 AM