One of my favorite time wasters is the site Quora, where you can ask any question you like and get (if you're lucky) dozens of answers from people who know.  Of course, being a site where the content comes from everyone and anyone, there are a good many dumb questions and even more dumb answers, but by and large, the site is fairly entertaining,

Having answered a couple of biology-related questions in the past, the site's algorithm now throws a lot of biological questions my way when I sign on, and just yesterday I was given an interesting one: do plants have life spans -- do they age and die?  As it so happens, I've read a bit (only a smattering, I'm hardly an expert) on this subject, and there actually is senescence -- age-related degradation -- in at least some species of plants, and that's not even counting true annuals which only live one year.

Yellow birch trees, for example, usually don't make it past forty or fifty years, quaking aspens sometimes not even that much.  Silver maples start to fall apart, often rotting from the inside out, when they're in their seventies and eighties; sugar maples can easily make it to 150 years.  At the upper end of the scale are trees like redwoods, which get into the thousands of years old.  The oldest known tree is a bristlecone pine in the White Mountains of California, which a trunk core showed to be 5,065 years old.

Consider it.  When Jesus walked the Earth, this tree was already three thousand years old.

In one of those weird synchronicities, yesterday afternoon -- only a couple of hours after I answered the question on Quora -- I stumbled upon a paper in Proceedings of the National Academy of Sciences that looked at the phenomenon of longevity in trees, more specifically in the strange Gingko biloba or "maidenhair tree," the only living species in the entire phylum Ginkgophyta.  It's native to southern China, and had been cultivated locally there for centuries for its beautiful symmetrical shape, graceful leaves, and incredibly smelly fruit that are used medicinally.  It was brought to Europe about three hundred years ago, and now is grown all over the world -- a remarkable comeback for a plant that was truly a living fossil.

Ginkgoes are amazingly long-lived, some specimens in China and Japan exceeding three thousand years in age.  The researchers collected tissue from a variety of ginkgo trees, from age three on up, and looked for the markers of senescence.

What they found was fascinating. 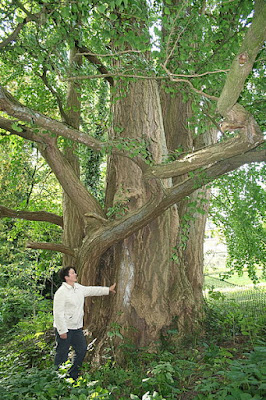 Dying leaves at mid-autumn showed lots of activation of aging-related genes.  On a leaf-by-leaf basis, the tree was doing exactly what animals do; experiencing metabolic slowdown, lowered immunity to infection, and structural degradation.  But the tree as a whole showed no such tendencies.  Genes related to aging showed no greater expression in old trees than they did in young trees.

There were differences, of course, primarily in genes controlling growth rate.  Young trees grow faster than old ones.  But it seems like if you're a gingko tree, you get to be your adult size, and then you just kind of go into stasis -- for thousands of years.

To quote Howard Thomas, botanist at Aberystwyth University (who was not involved in the ginkgo study), "The default condition for plants is immortality."

How this is controlled genetically is still poorly understood.  Hell, we don't even know how it's controlled in ourselves; it's likely to have something to do with the telomeres, the "end caps" on chromosomes that shorten with each cell division and thus act as a kind of molecular clock that keeps track of the age of the organism.  It's almost certainly not that simple, of course, and there are probably contributions to the aging process from cumulative DNA damage, epigenetic effects, metabolism and diet, and slowing of the immune system.  It's currently a huge area of research, because (face it) few of us are all that fond of the idea of aging.  I've got a great many more gray hairs, laugh lines, and backaches than I did even ten years ago, and if I could somehow reverse all that I'd be all for it.

An immortality pill is probably a long, long way off, enough that I pretty certainly won't be here to take advantage of it.  And whatever the mechanisms are for controlling aging in humans, they're not going to be similar enough to plants that the current research will give us much hope in that direction.

But given how the woo-woos think, expect a huge surge in sales for Ginkgo biloba tablets claiming that if you take them every day, you won't age.  Same as the craze for shark cartilage tablets a few years ago when the claim (which turns out to be false anyway) that sharks never get cancer convinced people that the way to avoid cancer was to swallow shark bits in pill form.

Me, I'm just interested in the research because it's kind of cool.  If this or other studies uncovers a solution to the aging problem, that'd be cool, but for now I think I'll just admire this lovely tree -- and marvel at its ability to live essentially forever.

Posted by Gordon Bonnet at 4:41 AM