A flood of mythic proportions

Ever heard of the Zanclean Flood?

If not, you definitely should, because it was pretty stupendous.

At some point during the late Miocene Epoch, a combination of tectonic activity and sea level drop brought the level of the Atlantic Ocean below the Gibraltar Sill, the range of (now underwater) mountains that crosses the Strait of Gibraltar, connecting Spain to Morocco.  When that happened, the Mediterranean Sea was cut off from the Atlantic, and received its only influxes of water from rainfall and the input from rivers (including the Rhone, Nile, Po, and Tiber Rivers).

At that point, the evaporation from the hot, dry winds off northern Africa and southern Europe occurred at a greater rate than the influx of water, and the Mediterranean began to dry up.  Eventually it split into two extremely saline parts, separated by another sill across the Straits of Sicily, each of which had a water level way below that of the rest of the Earth's oceans.

Well, in geology nothing is constant but change.  About 5.33 million years ago, tectonic activity, this time coupled with a sea level rise, eventually breached the barrier of the Gibraltar Sill, creating a waterfall.

But this wasn't just a waterfall.  This was a freakin' HUGE waterfall.

Geologist Daniel García-Castellanos, of the Spanish National Research Council, has done a tremendous amount of research into the Zanclean Flood and the events that led up to it, and has estimated that the Gibraltar Sill Waterfall, at its greatest, was a kilometer tall and was pouring two hundred million cubic meters of water into the Mediterranean Basin per second.

For reference, this is a thousand times more water than the Amazon River moves during the rainy season. 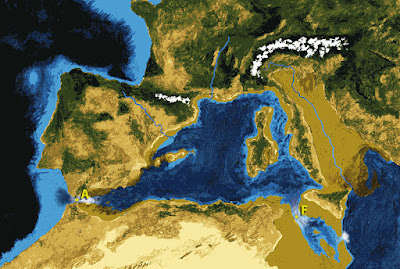 Artist's conception of the western Mediterranean just as the Zanclean Flood was beginning [Image licensed under the Creative Commons Paubahi, Etapa4, CC BY-SA 3.0]

So the Mediterranean began to refill, reaching increases in level of ten meters per day.  This kind of water flow created erosion like you can't even imagine, blowing enormous boulders over the Sill and down into what is now the western Mediterranean.  Anything in the water's path was drowned.  The sudden refilling of the basin drastically changed the climate, cooling what had been a blast-furnace of a desert (think Death Valley but much, much bigger).

All things considered, one of the most dramatic geological events ever.

One of the difficulties of studying it, though, is that all of the evidence is currently underwater.  But now García-Castellanos, again working with a team from the Spanish National Research Council, has found what might be the smoking gun for the Zanclean Flood.

Using seismic reflection profiles, García-Castellanos and his team have found massive piles of sediments that were apparently deposited over a very short period of time, right where you'd expect to find the talus pile of the Gibraltar Sill Waterfall.  It's enormous -- as you might expect -- 163 meters thick, 35 kilometers long, and 7 kilometers wide, extending from the Sill down into the depths of the Alborán Sea, the very western bit of the Mediterranean.  "The identified sediments are compatible with a megaflood event refilling the Mediterranean Sea through the Strait of Gibraltar," García-Castellanos said.  "It's an enlarged body deposited in the protected area at the lee side of a submarine volcano."

However, as befits a good scientist, García-Castellanos has invited other geologists and seismologists to examine the data and see if his conclusions are valid.  "Ten years after publishing the first observations that were related with the Zanclean Flood we are still finding new evidence to sustain it, but it is not conclusive," he said.  "All of the evidence that has been summarized in this article may have other possible interpretations and, before convincing the scientific community it will be necessary to have other studies that consider the hypothesis from other angles."

But however it eventually falls out, the refilling of the Mediterranean must have been something to see.  From a safe distance.  The geological processes of the Earth are often unsubtle, and their power makes me feel very, very small, but even looking at it from a geologist's perspective, this one must have been spectacular.

Feeling humbled by the universe is not necessarily a bad thing.  We humans have a way of getting cocky and thinking we're in charge of things.  Looking back in geological history, though, one very quickly realizes our fragility in the face of forces far, far more powerful than anything we've been able to devise -- and that our continued survival on Earth is in no sense guaranteed.