A twist in the fabric

I hope y'all will indulge me one more astronomical post, because just this week in the journal Science there was a very cool paper about an observational verification of the phenomenon of frame-dragging.

The whole thing depends on the the concept of "the fabric of space-time," something that got ripped so often on Star Trek that you'd swear the universe was made of cheap pantyhose.  To be fair, the idea isn't easy to wrap your brain around, something that becomes obvious when you hear some laypeople talking about the Big Bang.

I mean, I try to be tolerant, but if I hear one more person say, "It's a stupid idea -- that nothing exploded and became everything," I swear, I'm going to hurl a heavy object at 'em.

The problem hinges on trying to draw an analogy between the Big Bang (or in general, the expansion of the Universe) with a conventional explosion, where something blows up and spreads out into space that was already there.  With the Big Bang, it was space itself that was stretching -- if the idea of cosmic inflation turns out to be correct, at first it was at a rate that I can't even begin to comprehend -- so the matter in the Universe moved, and is still moving, not because something was physically pushing on it (as in the explosion of a stick of dynamite), but because the space it was embedded in was expanding.

(For what it's worth -- no, at this point we don't understand why this happened, what initiated it, or why the rate changed so suddenly after the "inflationary era" was over.  There is a lot still to figure out about this.  But one thing that's nearly certain is that it did happen, and the evidence still left behind of the Big Bang is incontrovertible.)

In any case, it's useful to change the comparison.  The Big Bang, and the expansion that followed, is much less like a conventional explosion than it is like blowing up a balloon.  Astronomer Edwin Hubble realized this when he first observed red shift, and found that everywhere he looked in the universe, objects seemed to be flying away from us -- the farther away, the faster they were moving.  It looked very much like we were the center of the Universe, the middle of the explosion, as if you were at the very point where a bomb exploded and were watching the bits and pieces rush away from you.

The truth, Hubble realized, was more subtle, but also way more interesting.  The fabric of space itself was stretching.  Picture a deflated balloon covered with dots.  You're a tiny person standing on one of the dots.  The balloon inflates -- and all the other dots appear to be rushing away from you.  But the weird thing is that it doesn't matter which dot you're standing on.  You could be on any dot, and still all the others would appear to be moving away, because the surface itself is expanding.  So an alien in a distant galaxy would also think everything was moving away from him, and he and Hubble would both be right.

There is no center of the Universe.  Or everywhere is the center.

Which amounts to the same thing.

So it's much more accurate, if you're trying to picture the whole thing, to think of space as being some kind of "stuff" capable of being deformed or stretched.

Which leads us to this week's mind-blowing discovery in astronomy.

One of the stranger predictions of the General Theory of Relativity -- and there's a lot of competition in that regard -- is that a massive spinning object would drag space-time along with it, twisting it out of shape in a phenomenon called Lense-Thirring frame dragging after the Austrian physicists who predicted it based on Einstein's theories, Josef Lense and Hans Thirring.  The problem is, like most of the phenomena associated with Relativity, the Lense-Thirring effect would only be observed in extreme conditions -- in this case a very high-mass object spinning really fast.

To give you an idea of what kind of extremes I'm talking about, here: with the Earth's mass and spin, the Lense-Thirring effect would cause an angular shift of about one degree every 100,000 years.

Not exactly something that jumps out at you. 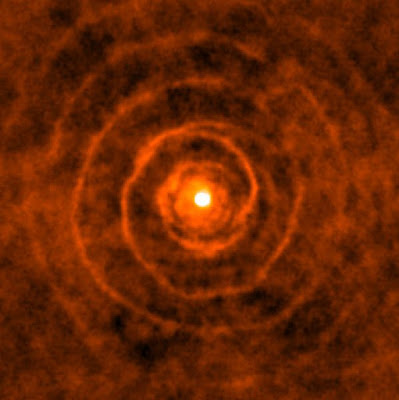 Now some scientists led by Vivek Venkatraman Krishnan of the Max Planck Institute have found a remarkable pair of stellar remnants that provide the perfect laboratory for observing frame-dragging -- a white dwarf/pulsar pair that go by the euphonious name PSR J1141-6545.  This is an ideal pairing to study because both the white dwarf and the pulsar are spinning, the white dwarf about once a minute and the pulsar 2.5 times per second.  Because the pulsar emits a lighthouse-like beam of electromagnetic radiation, this rotation makes it flicker on and off, and Conservation of Angular Momentum makes the flicker rate extremely constant -- in fact, the rotational period has been calculated to an accuracy of ten decimal places.

But the whirling of its companion star results in frame-dragging, so the pulsar's beam has developed a tilt as it got pulled through twisted space-time.  (Imagine a flexible object bending as it's dragged through water, and you have an idea of how to picture this.)  And careful observation of the pulsar's wobble has shown that the amount of tilt...

... is exactly what is predicted from the General Theory of Relativity.

So Einstein wins again.  Pretty impressive for a guy who once said to a friend struggling in a math class, "Do not worry too much about your difficulties in mathematics.  I can assure you that mine are still greater."

So that's our mindblowing science of the day.  Spinning stars, twisting space-time, and tilted pulsars.  I don't know how anyone can read about this stuff and not be both fascinated at how weird our universe is, and astonished that we've progressed to the point where we can understand at least a bit of it.  Here, several hundred quadrillion kilometers away, we've detected minuscule tilts in a whirling stellar remnant, and used it to support a theory that describes how matter and energy work throughout the Universe.

If that's not an impressive accomplishment, I don't know what is.