One of the main things that separates scientists from the rest of us is that they notice things we would just take for granted.

Gregor Mendel started in the research that eventually would uncover the four fundamental laws of inheritance when he noticed that some traits in pea plants seemed to skip a generation.  Percy Spencer was messing around with vacuum tubes, and noticed that in a certain configuration, they caused a chocolate bar in his pocket to melt -- further inquiry led to the invention of the microwave oven.  French physicist Henri Becquerel discovered radioactivity when he accidentally ruined some photographic plates with what turned out to be a chunk of uranium ore.  Alexander Fleming saved countless lives with the discovery of penicillin -- found because he wondered why a colony of mold on one of his culture plates seemed to be killing the bacteria near it.

I consider myself at least a little above average, savvy-wise, but I don't have that ability -- to look at the world and think, "Hmm, I wonder why that happened?"  Mostly I just assume "that's the way it is" and don't consider it much further, a characteristic I suspect I share with a lot of people.  So here's some recent research about something I've known about since I first started reading junior books on astronomy, when I was maybe ten years old, and never thought was odd -- or even worth giving any thought to.

Even more peculiar, when you think about it (which as I said, I didn't), is why inside of the Great Divide all the planets are small, dense, and rocky, and outside of it the planets are low-density gas giants (I do remember being shocked by the density thing as a kid, when I read that Saturn's overall density is lower than that of water -- so if you had a swimming pool big enough, Saturn would float). 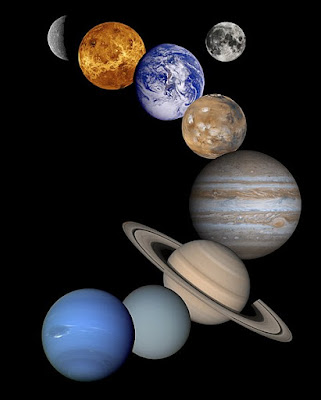 The problem with these sorts of observations, though -- even if you stop to wonder about them -- is that until very recently, we pretty much had a sample size of one Solar System to work with, so there was no way to tell if any particular feature of ours was odd or commonplace.  Even now, with the discovery of so many exoplanets that it's estimated there are a billion in our galaxy alone, we only have tentative information about the arrangement of planets around stars, to determine if there's any sort of pattern there, such as the apparent one in our neck of the woods.

Well, it looks like the physicists may have explained the Great Divide and the compositional difference of the planets on either side of it in one fell swoop.  A team from the Tokyo Institute of Technology and Colorado University have found that the Great Divide may be a relic of a ring of material that formed around the early Sun, and then was pulled apart and essentially "sorted" by the gravitational pulls of the coalescing planets.


We propose... that the dichotomy was caused by a pressure maximum in the disk near Jupiter’s location...  One or multiple such—potentially mobile—long-lived pressure maxima almost completely prevented pebbles from the Jovian region reaching the terrestrial zone, maintaining a compositional partition between the two regions.  We thus suggest that our young Solar System’s protoplanetary disk developed at least one and probably multiple rings, which potentially triggered the formation of the giant planets.

And once the process started, it accelerated, pulling dense, rocky material inward and lightweight, organic-chemical-rich material outward, resulting in a gap -- and an outer Solar System with gas giants surrounding an inner Solar System with small, terrestrial worlds.

"Young stellar systems were often surrounded by disks of gas and dust," said Stephen Mojzsis of Colorado University, who co-authored the paper, which appeared in Nature three weeks ago.  "If a similar ring existed in our own solar system billions of years ago, it could theoretically be responsible for the Great Divide, because such a ring would create alternating bands of high- and low-pressure gas and dust.  Those bands, in turn, might pull the solar system's earliest building blocks into several distinct sinks -- one that would have given rise to Jupiter and Saturn, and another Earth and Mars.

"It is analogous to the way the Continental Divide in the Rocky Mountains causes water to drain one way or another.  That's similar to how this pressure bump would have divided material in the early Solar System...  But that barrier in space was not perfect.  Some outer Solar System material still climbed across the divide.  And those fugitives could have been important for the evolution of our own world...  Those materials that might go to the Earth would be those volatile, carbon-rich materials.  And that gives you water.  It gives you organics."

And ultimately, it gives the Earth life.

So here we have a strange observation that most of us probably shrugged about (if we noticed it at all) that not only was instrumental to the formation of our own Solar System, but might (1) drive the arrangement of planets in star systems everywhere in the universe, and (2) has implications for the origin of life on our own -- and probably other -- worlds.

All of which brings to mind the wonderful quote by Hungarian biochemist Albert von Szent-Györgyi -- "Discovery consists of seeing what everyone has seen, and thinking what nobody has thought."

Posted by Gordon Bonnet at 5:54 AM