I'm probably pasting a big-ass bullseye right on my chest even asking this, but I have to: Trump supporters, what would it take for you to admit you were wrong about him?

During the election campaign, he mocked a reporter's disability, doing a grotesque parody of his flailing movements for a laughing, jeering crowd.  But you still voted for him.

It came out during the campaign that during a radio interview, Trump had bragged about sexual assault -- stating that when you're rich and famous you can do anything to women without their consent, including "grab(bing) them by the pussy."  But you still voted for him.

Despite his constant screeching about "witch hunts," the investigations into wrongdoing by members of his administration -- led by Republican Robert Mueller -- resulted in thirty indictments and a score more credible allegations.  But you still support him.

His disdain for other ethnic groups is blatant, from his responding to the hurricane damage in Puerto Rico by throwing rolls of paper towels into the crowd to calling Third-World countries "shitholes."   He fully supports policies keeping children from those "shithole countries" in cages on our borders, cages in which some of them have died.  But you still support him.

"Disdain" is probably too mild a word.  He shows every sign of being a racist, judging from his refusal to stand down from his call for the death penalty for the Central Park Five after they were all completely exonerated.  He has a history of racist and racially-insensitive statements going back into the 1970s, including a statement that "laziness is a trait in blacks."  But you still support him.

He lies continuously, to the point that there is an entire Wikipedia page dedicated to cataloguing them.  The Washington Post numbered them at over sixteen thousand.  And you still believe him.

He has repeatedly sided with Russia over our own policymakers and foreign policy experts, including stating publicly that Russia was right to be in Afghanistan and that there was no way Russia meddled in the 2016 election because Putin told him so.  But you still support him.

He has repeatedly weakened standards for pollution, most recently when his hand-picked EPA advisers ended a review of safe ozone levels with a statement that there "was no justification for continuing."  These advisors, by the way, are virtually all representatives of fossil fuel interests or the tobacco lobby.  Earlier this year, he rolled back water pollution standards, freeing up industry to dump pollutants into rivers and lakes without fear of prosecution.  Trump's own words about his environmental policies?  He "cares very deeply about the environment" and because of him "we'll have the cleanest air and water in the world."  And you still believe him.

His litany of blatantly fumbling, inarticulate, or outright ignorant comments are far too many to list, because there are new ones just about every time he opens his mouth.  But you still believe he is a "very stable genius."

And now, just two days ago, he pardoned Michael "Junk Bond" Milken and Rod Blagojevich from prison -- Milken from a ten-year sentence for insider trading, Blagojevich in the middle of a fourteen-year sentence for corruption and fraud -- for no reason except that he apparently thought of them as comrades-in-arms.  He said that Blagojevich's sentence in particular was a travesty, and that the ex-governor was railroaded by the "same people" who were responsible for his impeachment -- "Comey, Fitzpatrick, the same group."  This despite the fact that Comey had nothing to do with Blagojevich's trial, and the second man he was apparently referring to -- Patrick Fitzgerald -- was involved with Blagojevich's conviction but had nothing to do with the impeachment.

But you still trust him. 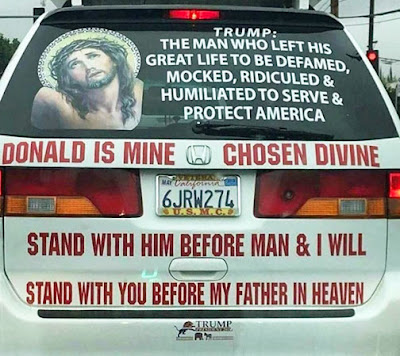 Wiser heads than mine have asked the question "what would it take?", and it keeps coming back to something Trump himself said during the campaign -- that he could shoot a man in full view on 5th Avenue and not lose a single supporter.  This seems to have little to do with conservatism per se: prominent conservative voices like Joe Walsh and Bill Kristol have come out stridently against the graft, corruption, and duplicity that have swamped the Republican Party, but despite their articulate criticisms of Trump and his cronies in Congress -- people like Lindsay Graham, Mitch McConnell, Matt Gaetz, and Jim Jordan -- Trump's support hasn't declined appreciably.

Look, I'm no party ideologue myself.  I tend to sit something left of center, but I have many conservative friends with whom I've had interesting, eye-opening, and productive discussions.  My father was a staunch conservative, to my knowledge voting Republican in every election, and I had great respect for his integrity and his views.  And when Democrats have been caught in criminal and/or immoral activity -- Elliot Spitzer, Anthony Weiner, and Blagojevich himself come to mind -- I, and most of the other Democrats I know, have not hesitated to call them out on it, and been glad for them to receive whatever consequences are appropriate.

So this is more than ideology.  This is a cult of personality.  And... if that doesn't frighten you, or seems an unfair designation... ask yourself why.  If you still support this man, after all of the above (and all the other egregious acts I don't have space to list), why?  What would he have to do, in your opinion, to go over the line?  Do you truly disbelieve everything I've listed, despite the video and audio evidence, and his own words in interviews and on Twitter?  Is it really all "fake news?"  Is a man who cheated on his wife with a porn star, who has currently standing 23 rape and sexual misconduct allegations, and who cannot recall a single Bible verse, really "the most godly, biblical president ever elected?"

If this isn't a cult, what the hell is it?  Go ahead, convince me.

And is this -- a culture of divisiveness, dishonesty, and corruption -- really what you had in mind when you voted for him?