How plants see the world

The final project in my AP Biology class was to design a piece of original research, carry out an experiment, and report on the results.  I was amazed at the creative ideas students came up with, and the elegance of their methods for finding an answer -- methods that were limited by considerations of budget, space, and time.

One of the best ones I recall came out of a discussion in class when we were studying botany.  I was telling the students about statoliths, small, dense particles in the cells of plants near the tips of roots and stems, that sink to the bottom of the cell and tell the plant what direction is up.  This detection of the pull of gravity allows for gravitropism, in which the roots grow downward and the stems upward, even in the absence of light.

This sense gets taken away in zero-g conditions, as on the International Space Station.  Experiments there have shown that without an apparent pull of gravity, seeds will sprout and the roots and stems grow in whatever direction the seed is oriented -- even if that means the roots will grow upward and the stems downward.

A student asked, "What would happen if you increased the pull of gravity?  In a spaceship floating in the atmosphere of Jupiter, for example?"

I had no idea, and I told him so.  Good question, but to my knowledge it hadn't ever been tested.

So when the end of the year came, that student decided to find out.

Since a trip to Jupiter was kind of out of the question, he designed an apparatus to simulate higher-gravity conditions.  He got an old ceiling fan motor and some lengths of PVC pipe, and built himself an electronic whirligig.  He then grew sunflower seeds in two-liter soda bottles hanging on the ends of the vanes -- attached the bottles and then spun the hell out of them.  Knowing the rotational speed of the whirligig and the radius of the vanes, he could calculate the centripetal force being exerted on the bottles, and thus the increase in apparent gravitational pull.

And when he opened up the bottles, he found something extraordinary.  The higher the average gravitational pull the seedlings experienced, the shorter they were, and the thicker the stems.  Up to the limit of his whirligig's speed, it was a nearly linear relationship -- higher pull = shorter, stouter seedlings.

So somehow, plants can not only detect the direction of the pull of gravity, but its strength.

We're just starting to understand how plants sense the world, and what sorts of responses they are capable of.  A paper last week in Current Biology, describing research conducted at the University of Helsinki, unlocked a piece of what might have been going on with my student's spinning sunflowers.  The research team, led by botanist Juan Alonso-Serra, found that birch trees whose branches are weighted -- simulating a higher-mass crown -- increase the rate of the radial growth of their trunks in order to better support the higher weight.  Better still, they found that the gene called ELIMÄKI (EKI) is critical to this response; plants with a defective EKI locus were not able to do this growth-rate compensation, and eventually collapsed.


Our results highlight a regulatory circuit by which weight in tree trunks mechanically stimulates cambial growth.  The ELIMÄKI locus participates in this circuit, as shown by its requirement at various levels, from weight-induced growth response to the proper control of gene expression related to touch-induced mechanosensing.  The circuit facilitates the local acquisition of the biomechanical characteristics of xylem in the correct spatiotemporal manner, which systemically leads to a correct vertical proprioception response.  It remains to be studied how weight- and development-derived forces are sensed and transduced into radial growth, but our results indicate a critical role for a degree of lateral stem movement.  Similarly, it remains to be studied whether the ELIMÄKI locus contributes directly to the sensing of the proprioceptive signal or whether it is only part of its response.  Our results provide a mechanism through which the critical height:diameter ratio implied by the mechanical theory of tree evolution can be achieved.

Which is pretty amazing.  My long-ago student's research was prescient -- and now we have a possible genetic mechanism by which this response is modulated.  (Note, however, that Alonso-Serra's team still had no model for how plants are sensing the higher weight.)

Plants are aware of their surroundings in ways that are only now being understood.  One of the more mysterious responses, for which I have still heard no particularly convincing explanations, is crown shyness -- the tendency in some tree species to avoid coming near the branches of other trees, leaving "lanes" of open sky when viewed from below. 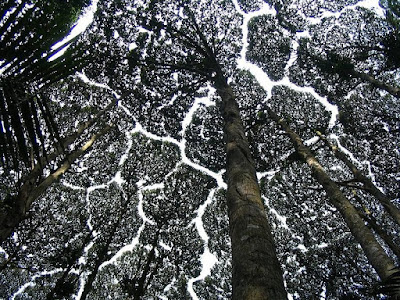 A grove of the Malaysian dipterocarp Dryobalanops aromatica, showing crown shyness [Image is in the Public Domain]

Why the usual approach -- growing taller and broader than your neighbor, so as to have better access to light (and as a side benefit, discouraging competition from the individuals around you) -- doesn't apply here, I don't know.  Two possible explanations are that having your branches not touch your neighbors' results in less chance of mechanical damage from the wind, and also provides less of a pathway for herbivores to get to you from nearby trees.

But it's hard for me to see how such minor benefits would result in such a striking response, which apparently has evolved more than once in only distantly-related species.

Also not fully understood is the phenomenon of photoperiodism, the way many plants time when to flower based on the relative lengths of the day and night.  There are a few suggestive experiments that the critical thing is the length of the night rather than the day -- breaking up the dark period by even a short flash of light disrupts the response, whereas a short dark period in the middle of the day has no effect.  Light in the red region of the spectrum has the strongest ability to disrupt this response, probably because a protein involved in the response (phytochrome) has its highest sensitivity to red light.  Some plants are extraordinarily sensitive, responding to changes in the day/night length of only a few minutes.

But exactly how they're accomplishing all of this is only partially understood.

So if we're just beginning to figure out how our own senses work, we've barely scratched the surface with the sensory apparatus of plants.  What's certain is they're not the mostly-inert little lumps we once thought, passively absorbing sunlight, otherwise unaware of their surroundings.  Plants are capable of sophisticated sensing and response -- whether to day/night length, the proximity of neighbors, weights on the branches -- or being spun around in a cobbled-together electric whirligig.