In the first part of my teaching career, I taught mainly physics and math, before switching to biology (which I then taught for the rest of my 32 years).  During my time as a physics and math teacher, I was fascinated by the number of students who didn't seem to be able to think numerically.  Some of them were quite skilled at equation manipulation, and so got good grades on quizzes.  The trouble started when they punched something into their calculator wrong, and got an answer that was wildly off -- and then didn't recognize that anything was amiss.

Probably the most extreme example of this was a girl in my physics class.  While we were studying electrostatics, there was a problem set up that was intended to lead you in the end to a value for the mass of an electron.  Well, she entered the numbers wrong, or divided when she was supposed to multiply, or some other simplistic careless error -- and got an answer of 86 kilograms.

She called me over, because when she checked her answer against the accepted value, it wasn't the same.  (Really not the same.  The mass of an electron is about 9 x 10^-31 kilograms -- a decimal point, followed by thirty zeroes, ending with a nine.)

"I must have done something wrong," she said.

I laughed and said, "Yeah, that's kind of heavy for an electron."

She gave me a baffled look and said, "It is?"

I thought she was kidding, but it became obvious quickly that she wasn't.  She knew 86 kilograms wasn't the number in the reference tables, but she honestly had no idea how far off she was.

I saw this kind of thing over and over, and the problem became worse when you threw scientific notation into the mix, which I suspect was part of the problem with my student.  It was all too common for students to believe that whatever came out of the calculator must be right -- many of them seemed to have no ability to give an order-of-magnitude check of their answers to see if they even made sense given the parameters of the problem they were trying to solve. 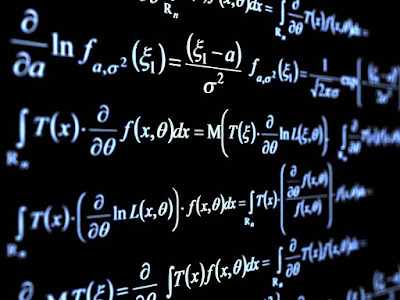 It's easy for those of us who are mathematically adept to be feeling a little smug right now.  But what is interesting is that if you change the context of the question, all of us start having similar troubles -- even expert mathematicians.

A group of psychologists at the Université de Genève set up two different sorts of (very simple) math problems, one of which requires you to think in sets, the other in linear axes.  Here's an example of each:
Both of these problems have the same parameters.  There are pieces of information missing (in the first, the number each of apples and pears Jim has; in the second, Jane's height and the height of the step she's standing on).  In each case, though, the missing information is unnecessary for solving the problem, and in each the solution method is (the same) simple subtraction -- 14 - 2 = 12.

What is extraordinary is that when asked to solve the problems, with an option to answer "no solution because there is insufficient information," people solved the axes problems correctly 82% of the time, and the sets problems only 47% of the time!

Even more surprising were the results when the same problems were given to expert mathematicians.  They got 95% of the axis problems correct -- but only 76% of the sets problems!

I found these results astonishing -- almost a quarter of the mathematicians thought that the information in the "apples and pears" problem above, and others like it, was insufficient to answer the question.

"We see that the way a mathematical problem is formulated has a real impact on performance, including that of experts, and it follows that we can't reason in a totally abstract manner," said Emmanuel Sander, one of the researchers in the study.

"One out of four times, the experts thought there was no solution to the problem even though it was of primary school level," said Hippolyte Gros, another of the authors of the paper, which appeared in the journal Psychonomic Bulletin and Review.  "And we even showed that the participants who found the solution to the set problems were still influenced by their set-based outlook, because they were slower to solve these problems than the axis problems...  We have to detach ourselves from our non-mathematical intuition by working with students in non-intuitive contexts."

What this shows is that the inability to think numerically -- what researchers term innumeracy -- isn't as simple as just a stumbling block in quantitative understanding.  Presumably expert mathematicians aren't innumerate (one would hope not, anyway), but there's still something going awry with their cognitive processing in the realm of sets that does not cause problems with their thinking about linear axes.  So it's not a mental math issue -- the mental math necessary for both problems is identical -- it's that somehow, the brain doesn't categorize the two different contexts as having an underlying similarity.

Which I find fascinating.  I'd love to have the same experiment run while the participants are hooked to an fMRI machine, and see if the regions of the brain activated in sets problems are different from the parts in axes problems.  I'd bet cold hard cash they are.

However, it still probably wouldn't answer what was amiss with the student who had the 86 kilogram electron.

Posted by Gordon Bonnet at 3:10 AM