One ring to track them all

I'm notoriously un-tech-savvy.  Or, to put it more accurately, my techspertise is very narrow and focused.  I've learned a few things really well -- such as how to format and edit posts here at Blogspot -- and a handful of other computer applications, but outside of those (and especially if anything malfunctions), I immediately flounder.

I have my genealogy software pretty well figured out (fortunately, because my genealogical database has 130,000 names in it, so I better know how to manage it).  I'm relatively good with my primary word processing software, Pages, and am marginally capable with MS Word, although I have to say that my experience with formatting documents in Word has been less than an enjoyable experience.  It seems to be designed to turn simple requests into major havoc, such as the time at work when I messed around with a document for two hours to figure out why it had no Page 103, but went from 102 directly to 104.  Repaginating the entire document generated such results as the page numbers going to 102 then starting over at 1, stopping at 102 and leaving the rest of the pages with no number, and deleting the page numbers entirely.  None of these is what I had explicitly asked the computer to do.

I finally took a blank sheet of paper, hand-wrote "103" in the upper right-hand corner, and stuck it into the printed manuscript.  To my knowledge, no one has yet noticed.

In any case, all of this leaves me rather in awe of people who are tech-adepts -- especially those who can not only learn to use the stuff adroitly, but dream new devices up.

Such as the gizmo featured in Science Daily that was the subject of a paper last month in Proceedings of the ACM on Interactive, Mobile, Wearable and Ubiquitous Technologies.  It describes a new device called AuraRing, developed at the University of Washington, that coupled with a wristband is able to keep track of the position of the finger that's wearing the ring.

"We're thinking about the next generation of computing platforms," said co-lead author Eric Whitmire, who completed this research as a doctoral student at the Paul G. Allen School of Computer Science & Engineering.  "We wanted a tool that captures the fine-grain manipulation we do with our fingers -- not just a gesture or where your finger's pointed, but something that can track your finger completely." 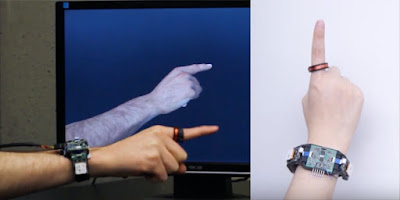 The AuraRing is capable of detecting movements such as taps, flicks, and pinches -- similar to the kinds of movements we now use on touch screens.  Another possibility is using it to monitor handwriting and turn it into typed text (although I have to wonder what it'd do with my indecipherable scrawl -- it's a smart device, but I seriously doubt it's that smart).

"We can also easily detect taps, flicks or even a small pinch versus a big pinch," AuraRing co-developer Farshid Salemi Parizi said.  "This gives you added interaction space.  For example, if you write 'hello,' you could use a flick or a pinch to send that data.  Or on a Mario-like game, a pinch could make the character jump, but a flick could make them super jump...  It's all about super powers.  You would still have all the capabilities that today's smartwatches have to offer, but when you want the additional benefits, you just put on your ring."

The whole thing reminds me of the amazing musical gloves developed a few years ago by musician and innovator Imogen Heap.  She's a phenomenal artist in general, but has pioneered the use of technology in enhancing performance -- not just using auto-tune to straighten out poorly-sung notes, but actually incorporating the technology as part of the instrumentation.

If you've never seen her using her gloves, take twenty minutes and watch this.  It's pretty amazing.

So that's the latest in smart technology that I'm probably not smart enough to use.  But I still find it fascinating.  One more step toward full-body emulation on a computer, complete with a body suit that will not only pick up your movements, but transfer virtual sensations to your skin.

Techno-nitwit though I am, I would be at the head of the line volunteering to try that out.