Pieces of the mosaic

The diversity you find among birds is really remarkable.

There are differences in bill shape, from the weird angled beaks of flamingos, to the longer-on-the-bottom fish skewers of skimmers, to the absurd (and aptly-named) spoonbills and shoebills, to the pelicans -- about whom my dad taught me a limerick when I was little:

A wonderful bird is the pelican.
His bill can hold more than his bellican.
He can stash in his beak
All his food for the week,
But I really don't see how the hellican.

Yeah, it's kind of obvious where I got my sense of humor from.

Of course, it doesn't end there.  The impossibly long toes of the South American jacanas (called "lilytrotters" because they can walk on the floating leaves of waterlilies).  The phenomenal wingspan of the albatross.  The insane plumage of the birds-of-paradise.

And the colors.  Man, the colors!  Even in my decidedly non-tropical home we have some pretty amazing birds.  The first time I saw an Indigo Bunting, I was certain that one of my sons had put a blue plastic bird on the bird feeder just to rattle my chain.  There couldn't be a real bird that was that fluorescent shade of cobalt.

But nothing prepared me for the colors I saw on my visits to Ecuador, especially amongst the birds of the tanager family.  There are hundreds of species of tanagers in that tiny little country, and because they often travel in mixed foraging flocks, you can sometimes see twenty or thirty different species in the same tree.  These include the Green-headed Tanager: 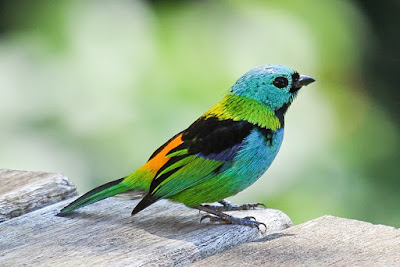 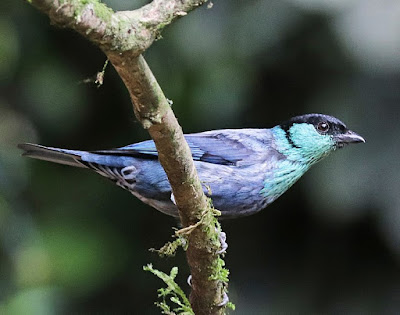 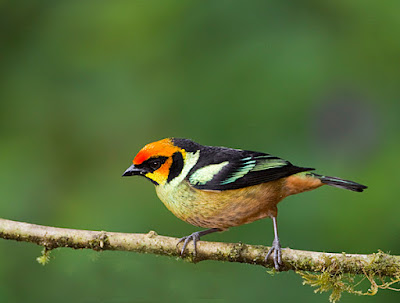 Being a biologist, of course the question of how these birds evolved such extravagant colors is bound to come up, and my assumption was always that it was sexual selection -- the females choosing the most brightly-colored males as mates (in this group, as with many bird species, the males are usually vividly decked out and the females are drab-colored).  If over time, the showiest males are the most likely to get lucky, then you get sexual dimorphism -- the evolution of different outward appearances between males and females.  (This isn't always so, by the way.  Most species of sparrows, for example, have little sexual dimorphism, and even experienced birders can't tell a male from a female sparrow by looking.)

The truth is, however, this is an oversimplified explanation, which I suppose I should expect given how long I've been in science.  Nature is both way more complex and way more interesting than we usually expect.  Just this week a paper was released in the journal BMC Evolutionary Biology that looks at another group of birds that look like someone went nuts with a paint-by-number set -- the Australasian lorikeets.

Lorikeets are in the parrot family, and even by comparison to other parrot species they're ridiculously flamboyant.  Take a look, for example, at the aptly-named Rainbow Lorikeet: 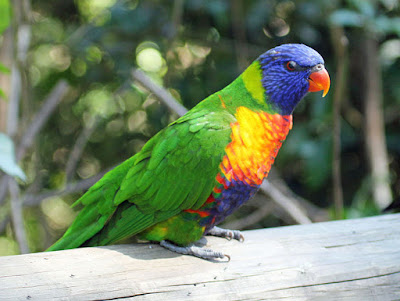 The researchers, Brian Smith, Glenn Seeholzer, and Jon Merwin of the American Museum of Natural History's Department of Ornithology, were curious about how lorikeets balance being bright enough to attract mates while not being so showy they attract the attention of predators -- the latter being in no short supply in Australia and New Guinea, where the birds are found.  Using spectral analyses of museum specimens encompassing nearly the entire diversity of lorikeets, Smith, Seeholzer, and Merwin found out a few things that were absolutely fascinating:
"The range of colors exhibited by lorikeets adds up to a third of the colors birds can theoretically observe," Merwin said.  "We were able to capture variation in this study that isn't even visible to the human eye.  The idea that you can take color data from museum specimens, infer patterns, and gain a larger understanding of how these birds evolved is really amazing."

Of course, I wondered if the same forces might be involved in the evolution of two groups I've actually seen in the wild, hummingbirds and the aforementioned tanagers.  It certainly seems to fit the same pattern -- a wide range of eye-catching colors on the front of the body, and -- especially in the hummingbirds -- largely green on top.

But that's just a guess.  It certainly opens up an interesting line of inquiry into the evolution of other bird groups.  And -- perhaps -- will end up explaining a great many of the other pieces of the biodiversity mosaic.