I've been trying to stay off the topic of politics lately.

Besides being depressing, the subject has lately been fraught with overtones of futility.  The followers of Donald Trump are more and more becoming a cult, where Dear Leader can do no wrong and his supporters cannot tolerate any criticism.  I have seen, I kid you not, images of Trump as a muscle-bound shirtless prizefighter, and as a Jesus-like figure with robes on a white stallion.  The near impossibility of getting the Trump Party members to see this man as the amoral, lying, narcissistic grifter the rest of us see was discovered last week, to his chagrin, by Joe Walsh, former Illinois representative and staunch conservative Republican.  Walsh, who is running for the GOP nomination -- not that you could tell if you talked to most Republicans -- was speaking to a crowd of GOP supporters in Iowa prior to the primary, and got a reception he described later on Twitter:

While I find it unfortunate that Walsh was treated discourteously, and even more unfortunate that no one was taking his message to heart, I have a hard time feeling sorry for the GOP as a whole.  They, and their mouthpiece Fox News, have created a perfect storm of conditions that is so reminiscent of the rise of the Nazi Party in Germany of the 1930s that anyone who doesn't see the parallels must be either ignorant of history or else willfully blind.  The whole thing brought to mind the wonderful quote from novelist Stephen King (which I then tweeted at Walsh, not that he responded to or probably even read it): "Those who have spent years sowing dragon's teeth seem surprised to find that they have grown an actual dragon."

And very few people have done more in the dragon's-tooth-sowing effort than Rush Limbaugh -- who on Tuesday evening was awarded the Presidential Medal of Freedom. 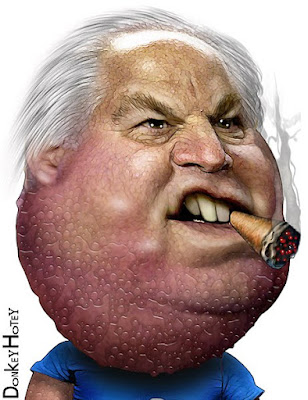 I haven't been surprised by much in these chaotic last few months -- Trump's defiance of the rule of law, Mitch McConnell's smirking, wink-wink-nudge-nudge defense of him, the Senate's decision to acquit him of charges that make Watergate look like a seventh grader shoplifting a piece of candy from the local grocery store.  But the awarding of the Medal of Freedom to the likes of Limbaugh took me off guard.

Limbaugh's hate-filled rhetoric has been inflaming the Right for decades, convincing them they're threatened (and that their opponents are amoral America-haters) in terms that are nauseating in their quantity and sheer ugliness.  A sampler:

There you have it.  The man that Donald Trump awarded with one of the highest honors given in the United States.  The man Trump just put in the same category as Rosa Parks, Norman Rockwell, Buckminster Fuller, Robert Redford, Carl Sandberg, Eudora Welty, Elie Wiesel, Grace Hopper, and Jonas Salk.

It's almost certain that Trump chose Tuesday night, the same night as the State of the Union speech, to give the award because Limbaugh just announced that he had been diagnosed with advanced lung cancer (after being a lifelong smoker -- and scoffer at the connection between tobacco use and cancer).  I wouldn't wish lung cancer on anyone, after watching the agony two of my uncles went through while dying of the disease, but the fact that he's a very sick man doesn't change the fact that he has spent his entire adult life spewing a venomous message with the sole purpose of fomenting hate.  Joe Walsh's reception at what turned out to be a MAGA rally shows how successful Limbaugh and his colleagues have been -- people like Ann Coulter, Sean Hannity, Tucker Carlson, Laura Ingraham, Rick Santorum, Mike Huckabee, and Glenn Beck, amongst many others.

And the fact that someone like Limbaugh was given a prestigious award for service to his nation shows just how far in the downward spiral we've gone.

I don't know what else to say.  I'm saddened, sickened, and disheartened by what my country has become and is becoming.  I fear that we haven't reached bottom yet, something I find profoundly frightening.

In fact, I think the dragon the GOP has grown is just beginning to rear his ugly head.