George Santayana's words, "Those who do not learn from history are doomed to repeat it," have been quoted so often they've almost become a cliché.  This doesn't make the central message any less true, of course.  A great many of the crises we're currently facing have been faced before -- making it even more frustrating that we're approaching them with the same laissez-faire, Panglossian breeziness that didn't work the first time.

Bringing up another quote, of uncertain origin but often attributed to Einstein, that insanity consists of doing the same thing over and over and expecting different results.

If you can stand one more cautionary tale that (given our track record) we still won't take to heart in our current situation, consider the fate of the 14th-century Greenland Vikings.

During the last decades of the first millennium C.E., the climate improved, opening up northern ocean lanes and encouraging the seafaring Danes, Swedes, and Norse to go forth and colonize (or from the perspective of the prior inhabitants, to rape, loot, and pillage).  Eventually this led to the settlement of coastal Greenland, in the form of several small villages that considering the conditions, did remarkably well for about three hundred years.

Then they were hit by a double whammy.

The first was the Little Ice Age, a quick downturn of global average temperature that occurred for reasons still largely unknown.  The Arctic ice began to extend its reach, making sea travel difficult to impossible.  The second was that the Greenlanders had overhunted the source of their livelihood; walruses, hunted both for meat and for ivory.  Walrus populations collapsed, killing trade and cutting the Greenlanders off from their European cousins -- especially now that travel was hazardous enough that there had to be a pretty significant financial incentive to make the trip.  This piece of the puzzle was the subject of a new paper that came out last week in Quaternary Science Reviews, and is why the topic was on my mind in the first place. 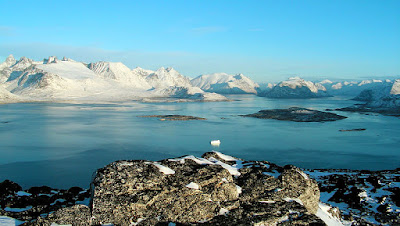 So the villagers were on their own as the food sources dwindled and the weather got steadily worse.  At some point, the last of the European Greenlanders died, alone and forgotten, and that was the end of the Viking presence in Greenland.  The thought of the final villager, waiting all alone for his own death, was such a deeply poignant image that when I first read about the story I wrote a poem about it -- a poem that won second place in Writers' Journal national poetry competition, and appeared in the January 1999 issue of the magazine.  It remains one of the high points of my writing career (and the only award I've ever gotten).  Here's the poem:

He goes down to the sea each day and walks the shore.
Each day the gray sea ice is closer, and fewer gulls come.
He wanders up toward the village, past the empty and ruined rectory.
The churchyard behind it has stone cairns.  His wife lies beneath one,
And there is one for Thórvald, his son,
Though Thórvald's bones do not rest there; he and three others
Were gathered ten years ago in the sea's net
And came not home.

Since building his son's cairn,
He had buried one by one the last four villagers.
Each time he prayed in the in the stone church on Sunday
That he would be next,
And not left alone to watch the ice closing in.

In his father's time ships had come.  The last one came
Fifty years ago.
Storms and ice made it easy for captains to forget
The village existed.  For a time he prayed each Sunday
For a ship to come and take him to Iceland or Norway or anywhere.
None came.  Ship-prayers died with the last villager,
Three years ago.  He still prayed in the stone church on Sunday,
For other things; until last winter,
When the church roof collapsed in a storm.
The next Sunday he stayed home and prayed for other things there.

Now even the gulls are going,
Riding the thin winds to other shores.  Soon they will all be gone.
He will walk the shore, looking out to sea for ships that will never come,
And see only the gray sea ice, closer each day.

The idea of a group of people sliding toward oblivion, ignoring the warning signs, and missing what you would discover only in retrospect was your last opportunity to escape, has a chilling resonance in our time.  What we're facing is the opposite of what did in the Greenland Vikings -- a human-induced climate warm-up.  Just last week, after an Antarctic summer that had an average temperature already poised to break the record, Esperanza Base on Antarctica's Trinity Peninsula recorded the continent's warmest temperature ever -- 64.9 F.  Ice is melting at a rate almost impossible to comprehend -- the average in the last five years is 252 billion tons melted per year.

But with few exceptions, the world's leaders are doing exactly what the poor Greenland Vikings did; carrying on as usual, expecting that things would work out at some point, all the while continuing to overutilize resources and ignore the warning signs.  The only difference here is that the climate cool-off that contributed to the collapse of the villages in coastal Greenland was a natural process.

Here, the warm-up is something we're doing to ourselves, and is due to a process that Swedish chemist Svante Arrhenius warned us would lead to global warming -- in 1896.

But as long as things haven't hit us personally, it's easy to look the other way rather than give up our lavish lifestyles.  Even wakeup calls like the recent Australian wildfires haven't shocked the world's leaders into action.  Except for a lot of sad head-shaking about those poor people whose homes burned down, and look at the sad koalas, not a damn thing has changed.

I fear that like the last Norse Greenlander, we're going to realize at some point -- most likely when it's too late to act (if it isn't already).  It's hard not to despair over the whole thing.  And it brings to mind one last quote, this one from the Bible, specifically the book of Hosea, chapter 8:  "He who sows the wind reaps the whirlwind."