It's not even 7 AM and I already broke the cardinal rule of the internet, which is, "Don't feed the trolls."

Posting as I do about controversial issues like climate change, evolution, and religion, it's only to be expected that I get pretty heated commentary sometimes.  While I'm always ready and willing to consider a well-reasoned argument against my viewpoints, I'm usually smart enough to let the "You only say that because you're a (choose one): radical leftist, godless heathen, anti-American, tree-hugger, cynic, whiny liberal, complete idiot" comments roll off me.

The one that got me today was the person who responded to a story I retweeted about a recent discovery in evolutionary biology with the time-honored snarl, "Your sciencism is more of a faith than my religion is.  I don't get why you trust something that could be completely disproven tomorrow.  I'll stick with eternal truths."

I spent a long time (well, to quote Lieutenant Commander Data, "0.68 seconds... to an android, that is nearly an eternity") trying to talk myself out of responding.  That effort being unsuccessful, I wrote, "... and I don't get why you trust something that is completely incapable of self-correcting, and therefore wouldn't recognize if something was wrong, much less fix it."

This resulted in another time-honored snarl, namely, "fuck you, asshole," which I am always surprised to hear from someone whose holy book says lots of stuff about "turn the other cheek" and "love thy enemies" and "pray for those who persecute you" but very little about "say 'fuck you' to any assholes who challenge you."

Anyhow, I do find it puzzling that self-correction is considered some kind of fault.  Upon some consideration, I have come to the conclusion that the problem is based in a misunderstanding of what kind of self-correction science does.  The usual sort is on the level of details -- a rearrangement of an evolutionary tree for a particular group of animals (that was the link that started the whole argument), a revision of our model for stellar evolution, an adjustment to estimates for the rate of global temperature increase.  As I've pointed out more than once here at Skeptophilia, truly paradigm-changing reversals in science -- something like the discovery of plate tectonics in the 1960s -- stand out primarily because of how uncommon they are.

So "this all might be proven wrong tomorrow" should be followed up with, "yeah, but it almost certainly won't."

As an example of how self-correction in science actually works, consider the paper that appeared last week in The Journal of Archaeological Science questioning a long-held narrative of the history of Rapa Nui, more commonly known by its European-given name of Easter Island. 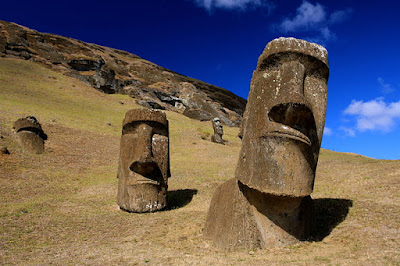 The previous model, made famous in Jared Diamond's book Collapse, was that the inhabitants of Rapa Nui did themselves in by felling all the trees (in part to make rollers and skids for moving the massive blocks of stone that became the iconic moai, the stone heads that dot the island's terrain) and ignoring the signs of oncoming ecological catastrophe.  The story is held as a cautionary tale about our own overutilization of natural resources and blindness to the danger signals from the Earth's environmental state, and the whole thing had such resonance with the eco-minded that it wasn't questioned.

Well, a team researchers, led by Robert DiNapoli of the University of Oregon, have said, "Not so fast."

In "A Model-Based Approach to the Tempo of 'Collapse': The Case of Rapa Nui (Easter Island)," the anthropologists and archaeologists studying Rapa Nui found that it may not be so clear-cut.  The pre-European-contact ecological collapse was much more gradual than previously believed, and it looks like the building of moai went on long after Diamond and others had estimated.  The authors write:


Rapa Nui (Easter Island, Chile) presents a quintessential case where the tempo of investment in monumentality is central to debates regarding societal collapse, with the common narrative positing that statue platform (ahu) construction ceased sometime around AD 1600 following an ecological, cultural, and demographic catastrophe.  This narrative remains especially popular in fields outside archaeology that treat collapse as historical fact and use Rapa Nui as a model for collapse more generally.  Resolving the tempo of “collapse” events, however, is often fraught with ambiguity given a lack of formal modeling, uncritical use of radiocarbon estimates, and inattention to information embedded in stratigraphic features.  Here, we use a Bayesian model-based approach to examine the tempo of events associated with arguments about collapse on Rapa Nui.  We integrate radiocarbon dates, relative architectural stratigraphy, and ethnohistoric accounts to quantify the onset, rate, and end of monument construction as a means of testing the collapse hypothesis.  We demonstrate that ahu construction began soon after colonization and increased rapidly, sometime between the early-14th and mid-15th centuries AD, with a steady rate of construction events that continued beyond European contact in 1722.  Our results demonstrate a lack of evidence for a pre-contact ‘collapse’ and instead offer strong support for a new emerging model of resilient communities that continued their long-term traditions despite the impacts of European arrival.

All of which points out that -- like yesterday's post about the Greenland Vikings' demise -- complex events seldom result from single causes.  Note that the researchers are not saying that the inhabitants of Rapa Nui's felling of the native trees was inconsequential, nor that the contact with Europeans was without negative repercussions for the natives, just as the paper cited yesterday didn't overturn completely the prior understanding that the Greenland Vikings had been done in by the onset of the Little Ice Age.  What it demonstrates is that we home in on the truth in science by questioning prior models and looking at the actual evidence, not by simply continuing to hang on to the previous explanation because it fits our version of how we think the world works.

So the self-correction about the history of Rapa Nui isn't a paradigm shift, unless you count the fact that its use as a caution about our own perilous ecological situation won't be quite so neat and tidy any more.  And what it definitely doesn't do is to call into question the methods of science themselves.  The proponents of "it could all be proven wrong tomorrow" seem to feel that all scientists are doing is making wild guesses, then finding out the guesses are wrong and replacing them with other wild guesses.  The reality is closer to an electrician trying to figure out what's wrong with the wiring in your house, first testing one thing and then another, gradually ruling out hypotheses about what the problem might be and homing in on where the fault lies so it can be repaired.  (And ultimately, ending up with functional circuitry that works every time you use it.)

But the truth is, I probably shouldn't have engaged with the person who posted the original comment.  There seems little to be gained by online snark-fests other than raising the blood pressure on both sides.  So I'm recommitting myself to not feeding the trolls, and hoping that my resolution will last longer than 0.68 seconds this time.