My first trip overseas, back in 1995, was an ambitious one; I did a month-long solo hike across England, starting on the shore of the Irish Sea in Blackpool and ending on a hill overlooking the North Sea in Whitby.  I decided to have a theme for the trip -- a practice I have continued to this day -- and the theme I chose was monasteries.

A great many of the abbeys in England were destroyed during the "Dissolution of the Monasteries," when King Henry VIII decided the church was getting way too rich and powerful and decided to see what he could do to remedy that.  Between 1536 and 1541, over eight hundred monasteries, abbeys, and convents were closed and their property sold off, the abbots, priests, and nuns turned out or arrested outright, the majestic buildings left to sink slowly into ruin.

Along the path I took, which largely coincides with the North York Moors Trail, there were a number of these relics, and I made a point of seeing as many as I could.  They were impressive, beautiful, tragic places, monuments not only to spirituality but to greed (on both sides of the struggle).

Unsurprisingly, the spiritual side of it didn't have a great impact on me, except for my sympathy for the religious men and women who had dedicated themselves to the contemplative life and then had those lives turned upside down by the conflict.  But it all seemed relegated in the distant past, unable to touch my modern experience except as a historical footnote.

Until I got to Rievaulx Abbey, near the town of Helmsley.

My hike into Rievaulx was on a gorgeous day -- one of the few I had during a four-week period that was cold and rainy even by English standards.  That day the weather was mild and sunny, with only a few white clouds in an azure sky.  I crested a low line of hills, and looked down into the little valley in which the ruins of the abbey sit, and was dumbstruck.

It was not solely because of the place's beauty, although beautiful it certainly is.  The place gave me chills, as if I was looking at something that wasn't quite of this world -- a reaction I had never experienced before and haven't experienced since. 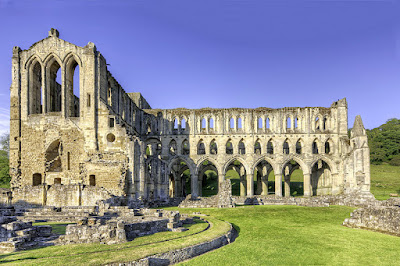 Now, twenty-five years ago, I was every bit as much of a skeptic as I am now, but I couldn't shake the feeling the entire time I wandered around the abbey grounds.  I dropped my pack and shucked my shoes by the side of a little tumbling river that runs through the valley, cooling my sore feet, and kept thinking about the men and women who had lived here -- and whose presence I could still, inexplicably, feel around me.

During my visit, I struck up a conversation with a friendly middle-aged couple, who ended up inviting me to have mid-afternoon tea with them.  I mentioned my odd sensations to them, and the woman immediately smiled.  "Oh, yes," she said.  "Lots of people feel that way about Rievaulx.  You get the impression not that the place is sacred because it's the site of an abbey, but that the abbey was built there because the place was already sacred."

I have never been able to explain what I felt during that visit, other than my rational side's certainty that the beauty of the day and the history of the place simply got the better of me.  But I keep coming back to the fact that I never had those sensations in any of the other religious sites I saw on that trip -- which included gorgeous, history-laden places such as York Cathedral, Fountains Abbey, Kirkham Priory, and Grey Friars Tower.  There was something different about Rievaulx, but what that something is, I've never put my finger on.

The Scots call spots like Rievaulx "thin places."  We walk side-by-side with the spirit world, the legends go, separated by an invisible veil, but in some places the veil is thin and we get a glimpse, or sometimes just a feeling, that there something more there than meets the eye.  Places like that aren't haunted in the conventional sense, but true believers will tell you that you can't go there and come away unscathed.

I won't say that my visit to Rievaulx convinced me of some kind of ineffable otherworld; after all here I am, over two decades later, still talking about rationalism and skepticism and for the most part casting a wry eye at claims of the paranormal.  But something happened to me in that little valley, whether I was picking up on a thin spot in the veil or it was simply the product of my senses acting on my often-overwrought imagination.

And while I don't agree with his basic assumptions, the whole experience makes the quote from the Romanian philosopher Mircea Eliade have a strange resonance for me: "Man becomes aware of the sacred because it manifests itself, shows itself, as something wholly different from the profane...  In each case we are confronted by the same mysterious act — the manifestation of something of a wholly different order, a reality that does not belong to our world, in objects that are an integral part of our natural profane world."