Yesterday's post about self-correction and reframing in science prompted a friend of mine, the phenomenal author, blogger, and all-around polymath Gil Miller, to send me an interesting link about an archaeological site in California.

The striking thing about this link is its alleged age.  There are mastodon bones showing signs of butchering dating to 130,000 years ago -- which is 115,000 years older than the oldest recording human-occupied site in North America. 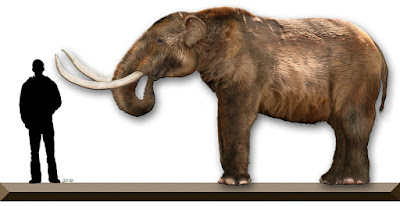 Accepting this would require a major retooling of our understanding of the human colonization of the continent.  Were there other hominids living here, who then died out prior to the ancestors of the Native Americans crossing her from Asia?  If so, why aren't there more fossils and other relics?  Was this an early wave of colonization from Siberia, which made it to California but ultimately was unsuccessful?  Is the damage to the bones caused by something other than butchering?  Are the dates of the bones in error?

The answer to the last-asked question, at least, seems to be no.  If a site shows anomalous dates, the first thing you do is... check the dates.  Which was done, and it seems like the radioisotope dating of the mastodon bones is correct.

As far as the others, here's what the authors have to say (from their 2017 paper on the topic in Nature).  The passage is a bit long, but it gives you the scope of their argument:


The earliest dispersal of humans into North America is a contentious subject, and proposed early sites are required to meet the following criteria for acceptance: (1) archaeological evidence is found in a clearly defined and undisturbed geologic context; (2) age is determined by reliable radiometric dating; (3) multiple lines of evidence from interdisciplinary studies provide consistent results; and (4) unquestionable artefacts are found in primary context.  Here we describe the Cerutti Mastodon (CM) site, an archaeological site from the early late Pleistocene epoch, where in situ hammerstones and stone anvils occur in spatio-temporal association with fragmentary remains of a single mastodon (Mammut americanum).  The CM site contains spiral-fractured bone and molar fragments, indicating that breakage occured while fresh.  Several of these fragments also preserve evidence of percussion.  The occurrence and distribution of bone, molar and stone refits suggest that breakage occurred at the site of burial.  Five large cobbles (hammerstones and anvils) in the CM bone bed display use-wear and impact marks, and are hydraulically anomalous relative to the low-energy context of the enclosing sandy silt stratum.  230Th/U radiometric analysis of multiple bone specimens using diffusion–adsorption–decay dating models indicates a burial date of 130.7 ± 9.4 thousand years ago.  These findings confirm the presence of an unidentified species of Homo at the CM site during the last interglacial period (MIS 5e; early late Pleistocene), indicating that humans with manual dexterity and the experiential knowledge to use hammerstones and anvils processed mastodon limb bones for marrow extraction and/or raw material for tool production.  Systematic proboscidean bone reduction, evident at the CM site, fits within a broader pattern of Palaeolithic bone percussion technology in Africa, Eurasia, and North America.  The CM site is, to our knowledge, the oldest in situ, well-documented archaeological site in North America and, as such, substantially revises the timing of arrival of Homo into the Americas.

As I discussed yesterday, the process of science is that when someone makes a claim, his/her fellow scientists immediately jump in and tear it apart, looking at it from every angle, asking if there are other explanations that account for all the evidence, and in general trying to refute it.  They don't do this to be mean.  The idea is to see if the proposed model can withstand scrutiny -- to see, in scientific parlance, if it is "robust."

And this claim had an additional caveat; to accept it meant to undo our entire previous understanding of how the Americas were colonized by humans.  Carl Sagan's "ECREE Principle" applies here -- "Extraordinary Claims Require Extraordinary Evidence."  So the cross-checking and verification was especially intense.

Most archaeologists were unconvinced.  In an article in BBC Online by BBC science editor Paul Rincon, David Meltzer, professor of archaeology at the Southern Methodist University of Dallas, Texas, put it most succinctly: "Nature is mischievous and can break bones and modify stones in a myriad of ways.  With evidence as inherently ambiguous as the broken bones and nondescript broken stones described in the paper, it is not enough to demonstrate they could have been broken/modified by humans; one has to demonstrate they could not have been broken by nature.  This is an equifinality problem: multiple processes can cause the same product."

Which is the problem in all of science.  In order to demonstrate your claim, you have not only to provide evidence, but to show that there is no other explanation that explains it equally well.  Especially here, when to accept the claim requires rewriting everything we know about Western Hemisphere archaeology -- invoking another good rule of thumb, Ockham's Razor.

Usually framed as, "if there are competing explanations, the one that requires the fewest ad hoc assumptions is most likely to be correct."

So at the moment, the consensus about the Cerutti Mastondon Site claim is "maybe, but probably not."  The Holen et al. paper has not stood the test of scientific scrutiny.  Which doesn't mean the claim is wrong; plenty of weird claims have later been shown, by virtue of additional evidence, to have been correct.  But in the absence of that evidence, we have to be able to say, "We don't know."

As an extraordinary claim, thus far it seems not to have reached the bar of support we expect in science.