Today's cool science story is remarkable not only for the discovery the researchers made, but the extraordinary way in which they made it.

In the earliest days of astronomy, skywatchers noticed that some of the points of light up there didn't behave like the others.  Instead of being fixed into position relative to one another, they shifted night to night and season to season.  The Greeks called these ἀστέρες πλανῆται, "astéres planetai, wandering stars" -- so our word "planet" translates loosely to "wanderer."

It took a long while to figure out exactly why this was happening, a process confounded by the ancients' determination that the skies be a place that was unchanging and eternal.  But once Copernicus and Kepler and the gang sorted out how things actually worked, it became obvious that the planets' apparent movement was because they were so much closer than the stars.  And other bodies in orbit around the Sun -- comets and asteroids, for example -- did the same thing.  This provided astronomers a method for finding hitherto-unknown bodies in the Solar System.

Look for a point of light that appears to move against the backdrop of distant stars, and you've found something that's (relatively) close by, and moving with respect to the Sun.

That's how the thousands of known asteroids and hundreds of known comets were discovered -- a painstaking study of the night skies, looking for something that's in one position today and a different one tomorrow.  It's how the remarkable object 'Oumuamua (the name means "advance scout" in Hawaiian) was discovered, the first verified object of interstellar origin to trek its way through the Solar System -- and which is almost certainly of completely natural origin, despite the wishes of those of us who grew up reading Arthur C. Clarke's Rendezvous with Rama.

As the bigger and nearer (and therefore brighter) objects are discovered, though, finding any remaining ones becomes increasingly difficult.  A typical view of the night sky in a decent telescope looks like this: 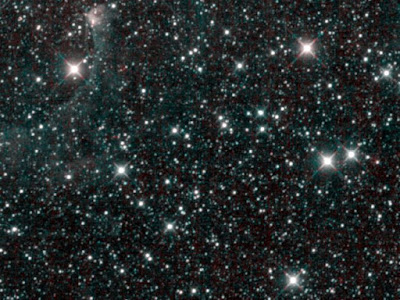 Now, imagine that your task is to compare this photograph to one exactly like it except for the fact that one of the fainter dots has moved a couple of millimeters.

That's what comet-hunters are up against.

All of that is background on today's amazing discovery, which is that astronomers at the University of Pennsylvania have combed through six years of data from the Dark Energy Survey Project, and have identified no less than three hundred "trans-Neptunian objects" -- dwarf planets, asteroids, and comets that orbit beyond Neptune.  In some cases, way beyond -- they found "TNOs" that were ninety times the distance of the Earth from the Sun (three times further away than Neptune itself is).

The way they did this is mind-boggling.  They started with seven billion objects in photographs -- dots of light, really -- and using sophisticated image-analysis software, eliminated any that were obviously not shifting position.  This whittled it down to a mere 22 million.  They then used the software in a giant game of connect-the-dots -- linked objects to two nearby ones to form a triangle, then checked to see if the triangle changed size or configuration from night to night.  After all was said and done, they identified three hundred out of the original seven billion that aren't stars, but small objects in orbit around the Sun out past the orbit of Neptune.

This gives the phrase "needle in a haystack" new meaning, doesn't it?

The most amazing thing about this is that the data they've collected and analyzed will be invaluable for astronomers looking for much larger objects circling the Sun much farther away.  Now that the TNOs have been identified, keeping track of their positions will allow for calculation of their orbits, so it will be possible to see if any are being "gravitationally perturbed" by larger objects out there.  This was the way Alexis Bouvard discovered Neptune -- small disturbances in the motion of Uranus clued him and others in to the possibility that there was another planet out there pulling on it, deflecting it from its predicted path.  Now we've got three hundred possible sources of data to use as a means to locate other larger objects that may be out there.

"There are lots of ideas about giant planets that used to be in the solar system and aren't there anymore, or planets that are far away and massive but too faint for us to have noticed yet," said study co-author Gary Bernstein.  "Making the catalog is the fun discovery part.  Then when you create this resource; you can compare what you did find to what somebody's theory said you should find."

Which is all kind of stunning to me.  Our level of sophistication in studying the skies has increased so dramatically in the last twenty years that new and fascinating discoveries are being made nearly on a daily basis.  It also makes me wonder what else is out there still to discover -- surely worlds upon worlds, out there in the vastness of space, just waiting for us to find them.

Posted by Gordon Bonnet at 4:30 AM