An epidemic of lunacy

The news over the last few days has been nothing but COVID-19 over and over.  I understand it -- a pandemic on this scale is pretty stupendous -- but it's having the effect of making me not want to look at news sites.

The reason for that reluctance is not because I don't want to be informed, but because I'm tired of reading about people's idiotic responses to it.  Today the focus seemed to be on evangelical religious leaders, whose reactions are so absurd they beggar belief.  Here's a sampler:
For years the right-wing talking heads -- people like Rush Limbaugh, Jerry Falwell Sr. and Jr., Ann Coulter, and more recently, Tucker Carlson, Sean Hannity, and Laura Ingraham -- have been spreading the message that (1) you shouldn't believe the experts, (2) you shouldn't believe anything if Democrats agree with it, (3) everyone in the media is lying to you, and (4) conservative white Christians are being discriminated against, if not outright targeted for elimination.  What this has done is to create an entire group of people who are completely insulated from the facts.  Anything that happens is forced into this mold.  A pandemic?  The epidemiologists are lying.  The media are lying.  It's the evil Democrats trying to damage Dear Leader.  And besides, God will protect us even through adversity, so why bother following directives for isolation and quarantine, or even hand-washing? 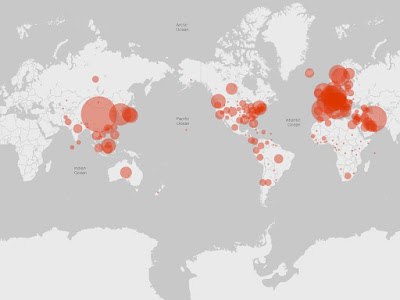 What's ironic about all of this is that unless the pandemic dies down a lot faster than most experts believe it will, this group of people will be uniquely susceptible to infection.  You have to wonder what would happen if 90% of the congregation of one of these lunatics contracted COVID-19.

Nothing, is my guess.  People of this stripe seem to have as their motto, "Death before admitting I'm wrong."  And they don't see that the measures being recommended are intended to protect people, not to hamstring right-wing politicians, and that taking precautions not to infect yourself or others makes sense whether or not you believe in God.  After all, evangelical Christians still look both ways before they cross the street.

Or at least, I'm guessing they do.  The attitudes of the wackos mentioned above suggest that even that might be a stretch.

Let's hope that at least they don't take "Jesus, take the wheel!" literally.

Whether or not you're religious, a more sensible approach is the one recommended by Vermont-based clinical psychologist Lindsay Jernigan.  "Try this perspective shift," Jernigan said.  "Instead of seeing social distancing and travel bans as panic, try seeing them as acts of mass cooperation to protect the collective whole.  The plan is not about individuals going into hiding.  It's a global deep breath, an agreement among humans around the planet to be still.  Be still, in hopes that the biggest wave can pass without engulfing too many of the vulnerable amongst us."

But I'm guessing even that would fall on deaf ears.  The words "collective whole" would come up, and after that, the aforementioned wingnuts would hear only "socialism liberal plot hurr durr" and that'd be that.

You can't win, not against a wall of disinformation that's been built up this carefully for this long.  I can only hope that the human cost of these decades of anti-intellectual propaganda won't be too high.