Analysis of a cold snap

Almost exactly 12,800 years ago -- and yes, we know it to that degree of accuracy -- there was a sudden plunge in the global temperature.

It's known as the "Younger Dryas" event, after the steppe wildflower Dryas octopetala, which only grows well when the conditions are very cold in winter.  The proxy records (bubbles in ice cores, patterns of glaciation, and types of pollen found in ice and sediments -- such as the aforementioned Dryas) are all in good agreement that in only ten or twenty years, the temperature in the Northern Hemisphere plunged, in some places by as much as 6 C. 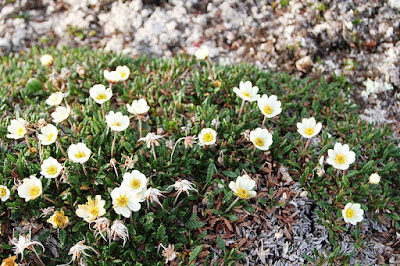 That may not seem like very much, but six degrees is huge.  In fact, the word that comes to mind is "catastrophic."  The glaciers that had been receding -- this is, or at least was, an interglacial period -- suddenly began to extend their reach.  The cold period didn't abate for over a thousand years, with enormous impact on the humans around at the time.  The Younger Dryas correlates with the collapse of two of the dominant cultures, the Clovis civilization of North America and the Natufian culture of the Middle East.

But what could cause such a sudden and calamitous change in the temperature?

For years, the culprit was thought to be Lake Agassiz, a colossal freshwater lake that encompassed all five of the Great Lakes (and a lot more square milage as well), which was held back by an ice dam across what is now the Saint Lawrence Seaway.  As the temperature warmed -- remember, interglacial period -- the dam became unstable and finally collapsed, causing a humongous (I'm running out of words for "big," here) outflow of cold fresh water into the North Atlantic.  The result was a drastic slowing of the North Atlantic Meridional Turnover, which powers the Gulf Stream and keeps the Northeastern United States, Great Britain, Iceland, and Scandinavia at least reasonably warm.  The Turnover is caused by saline water (which is denser) sinking south of Iceland, and when the ice dam collapsed and the lake drained, the entire North Atlantic was covered by a sheet of water that was too fresh to sink.  The result: a slowdown of the circulation, and a return of glacial conditions.

Another, more far-fetched possibility is that the Earth got blasted by the shock wave of a supernova in the constellation Vela.  There is good evidence that the Vela supernova was coincident with the beginning of the Younger Dryas -- but connecting this to the drop in temperature is a bit of a stretch for most climatologists.

Recently, a third option has been gaining strength, and that's the fallout from the impact of a comet or meteor.  Here, the idea is that the debris thrown skyward by the impact blocked sunlight and caused a drop in temperature.  The impact hypothesis just got a boost last week with a paper in Scientific Reports, about a microanalysis of sediments from a place called Abu Hureyra that show good evidence of being flash-fried 12,800 years ago.

The sediments were collected decades ago, because the site itself was drowned when the Taqba Dam was put in place in 1970.  Archaeologists figured they better get what they needed from Abu Hureyra before the waters rose, and that included samples of everything they could get their hands on.  And an analysis by a team led by Andrew Moore of the Rochester Institute of Technology found that the bits of rock and other debris from the site dating to -- you guessed it, 12,800 years ago -- were coated with melted glass, indicative of a temperature of at least 2,200 C.

"To help with perspective," said James Kennett of University of California-Santa Barbara, who co-authored the paper, "such high temperatures would completely melt an automobile in less than a minute."

So the impact hypothesis is sounding more and more plausible.  What this kind of research always brings home for me, though, is how fragile the Earth's climate balance is.  Climate change deniers like to point out that there have been climatic ups and downs in the past, and the Earth has recovered; what they seldom add is that those ups and downs often resulted in mass extinctions.  So sure, the temperature rebounded after the Abu Hureyra collision.

A fat lot of good that did for the Pleistocene megafauna, such as mastodons, dire wolves, North American camels, and gomphotheres -- a bizarre North American elephant relative.  The humans didn't do much better; the ones who didn't get cooked and/or flattened by the impact very likely starved to death because of the mass die-off of plants and animals in the years following the collision.  How many made it through the bottleneck, and became our direct ancestors, is unknown, but it probably wasn't many.

So that's our cheery scientific discovery of the day.  A meteor impact triggering temperatures hot enough to melt glass, followed by a shower of debris and a drastic drop in global temperature.  I'd like to think this would be a cautionary tale, showing the effect one event can have on the climate, but at this point I know better.  We've pretended that everything is hunky-dory and ignored the scientists so far, so we'll be fine, right?