All it took was Donald Trump harping on the "Chinese virus" thing for a few days, and all of his MAGA followers took off in a large herd, bleating angrily about how the most important thing was making China pay for causing all this.  I've already seen three people post that COVID stands for "China-Originated Viral Infectious Disease."  Worse, when someone responded that this was incorrect, that it stands for "COronaVIrus Disease," another person piped up, "Who gives a fuck?  It started in CHINA and that's all that matters."

Not the fact that we currently have the highest number of cases in the world here in the United States.  Not that we are woefully behind in testing, whatever Trump and his cronies would have you believe.  Not that we're in drastic need of PPE, including masks and gloves, and that some hospitals have substituted plastic garbage bags for protective suits -- and that because Trump is a vindictive toddler, it's looking like what PPE we do have is going to be parceled out according to which states' governors kiss Trump's ass most enthusiastically.

I've said more than once recently that none of this is going to change until some miracle occurs and Fox News decides to end their nightly celebratory circle-jerk over how wonderful Dear Leader is.  Every day they're presenting nothing but lies, spin, and propaganda, and a good 50% of Americans get their news solely from Fox.

And don't even start with what-about-ism.  Yes, I know the other media sources are biased.  Show me one major American news source that lies as consistently and as maliciously as Fox.  There have been whole studies that have shown that Fox News viewers are, across the board, the least aware of the facts by comparison to viewers from six other sources -- and compared to those who don't watch the news at all.  That's right: not watching the news leaves you, on average, better informed than watching Fox.

Anyhow, because Trump et al. are now more concerned about getting people pissed off at China than they are about dealing with the problem in our own country, we also have conspiracy theories popping up all over the place that the virus didn't just originate in China, it was created by China.  In some versions, the pandemic was caused by a lab accident in Wuhan; in others, the virus was deliberately introduced into the population, for reasons that remain unclear (largely because it didn't happen, but try to tell the conspiracy theorists that). 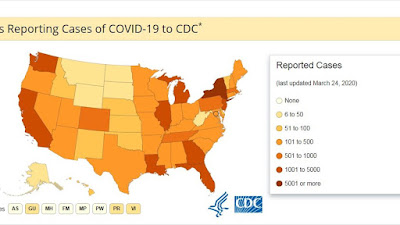 In any case, this sort of thing is becoming so widespread that a team led by virologist Kristian Andersen of Scripps just published a study analyzing the genome of the COVID-19 virus, and they found that --  beyond a shadow of a doubt -- the virus is a natural pathogen, and it looks like although it started in some non-human animal (bats and pangolins being the two top contenders), all it took was one jump to a human host to get the ball rolling.

In "The Proximal Origin of SARS-CoV-2," we read the following:


It is improbable that SARS-CoV-2 emerged through laboratory manipulation of a related SARS-CoV-like coronavirus.  As noted above, the RBD [receptor-binding domain] of SARS-CoV-2 is optimized for binding to human ACE2 with an efficient solution different from those previously predicted.  Furthermore, if genetic manipulation had been performed, one of the several reverse-genetic systems available for betacoronaviruses would probably have been used.  However, the genetic data irrefutably show that SARS-CoV-2 is not derived from any previously used virus backbone.  Instead, we propose two scenarios that can plausibly explain the origin of SARS-CoV-2: (i) natural selection in an animal host before zoonotic transfer; and (ii) natural selection in humans following zoonotic transfer.  [Italics mine]

Of course, the claim that it was bioengineered never had much going for it.  Molecular epidemiologist Emma Hodcroft, of the University of Basel, said in an interview with Science News, "Essentially their claim was the same as me taking a copy of the Odyssey and saying, 'Oh, this has the word the in it,' and then opening another book, seeing the word the in it and saying,  'Oh my gosh, it’s the same word, there must be parts of the Odyssey in this other book.'  It was a really misleading claim and really bad science."

What about the claims of China mishandling the response to the epidemic, and then lying about it?  Okay, they probably did.  But the people who are bitching the most about this seem perfectly fine with Donald Trump doing the same damn thing.  "It's another Democrat hoax."  "One day, like a miracle, it will disappear."  "Anyone who needs a test, gets a test... and the tests, they're beautiful."  "Health insurance companies agreed to waive all co-payments for coronavirus treatments, extend insurance coverage to these treatments, and to prevent surprise medical billing."  "[W]hen you have fifteen people, and the fifteen within a couple of days is going to be down to close to zero, that's a pretty good job we've done."

And after all that, he had the gall to say, "I’ve always known this is a real—this is a pandemic.  I felt it was a pandemic long before it was called a pandemic…  I’ve always viewed it as very serious."

But on Fox News apparently Trump can say one thing today and exactly the opposite tomorrow, and the loyal viewers will believe him both times.

Okay, I'm ranting.  But this is killing people.  There seems to be no way to compel Fox to stop lying, even when American citizens are being harmed as a direct result of what they air.  I'm all for freedom of speech and freedom of the press, but I'm also for personal responsibility -- and when your lies cause people to die, there should be some kind of legal recourse available.

But thus far, they've gotten away with it scot-free, and in fact are encouraging the conspiracy theories and anti-Chinese sentiment, probably to draw attention away from the abject failure of our own government to act quickly and responsibly.  The ironic thing is that the success of their own strategies has put their own viewers into the greatest likelihood of harm -- and that even that isn't stopping them from their daily smorgasbord of disinformation.