Homing in on Tatooine

I remember the first time I ran into the concept that the Earth's relatively circular orbit might not be universal amongst the planets out there in the universe.

I shudder to admit that it was on the generally abysmal 1960s science fiction series Lost in Space.  The brave crew of the Jupiter 2 are stranded on a strange planet, and initially the whole place seems to be a frozen wasteland.  But after a journey via their "chariot" (as they call their tank-like wheeled transport vehicle), they find the temperature is seesawing wildly -- at first it seems to be heading to cold temperatures that will eliminate all possibility of life, but unexpectedly the mercury begins to rise, and what was a crossing on solid ice turns into a treacherous sea voyage (the chariot, fortunately, has amphibious capabilities).

The explanation we're given is that the planet they're on has a very elliptical orbit, so it experiences huge temperature changes.  Unfortunately, the writers of the show apparently did not understand that there's a difference between a planet's rotation and its revolution, so they depict the excruciatingly hot temperatures when the planet is at its perigee as only lasting a minute or two, so all the Robinsons had to do was hide under a reflective shelter for a little bit to avoid getting cooked.

So good idea, lousy execution, which can be said of much of that series.

A more fundamentally startling change in my perception of what it'd look like on another planet occurred when I saw Star Wars for the first time, and hit the iconic scene where Luke is looking toward the horizon as sunset occurs on Tatooine -- and there are two suns in the sky.  Tatooine, it seems, orbits a binary star -- something I'd honestly never thought about before then. 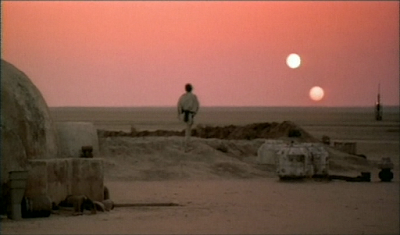 Being a science nerd type, I wondered what the shape of a planet's orbit would be if it were moving around two centers of gravity, and found pretty quickly that my rudimentary knowledge of Newton's Laws and Kepler's Law were insufficient to figure it out.

Turns out I wasn't alone; physicists have been wrestling with the three-body problem for a couple of hundred years, and there is no general solution for it.  Three objects orbiting a common center of gravity results in a chaotic system, where the paths of each depend strongly on initial conditions (and some configurations are unstable and result in either collisions or one of the objects being ejected from the system).

It is known, however, that there are points in a three-body system called Lagrange points (after their discoverer, the French mathematician and astronomer Joseph-Louis Lagrange) which result in a stable configuration in which each of the orbiting bodies stays in the same locked position relative to the other, so the entire system seems to turn as one.  Some of the moons of Jupiter (the so-called Trojan moons) sit at the Lagrange points for that system, a pattern that seems to be stable indefinitely.  (Note that from the Earth perspective, an object at the L3 Lagrange point would never be visible -- leading conspiracy wackos to postulate that it could be a place for alien spacecraft to be hiding.) 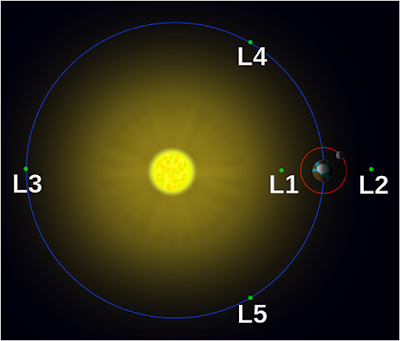 Things only get worse when you add additional objects.  The only way to approximate the configuration of the orbits is to input the specific initial parameters and use computer modeling software to determine a solution; there is no general set of equations to predict what it will look like.

What brings this up is a paper this week in The Astrophysical Journal that went beyond the theoretical, and found actual data from binary star systems with planets to see what the various orbits looked like.  In "The Degree of Alignment between Circumbinary Disks and Their Binary Hosts," by a team led by Ian Czekala of the University of California - Berkeley, we read about new observations from the Atacama Large Millimeter/submillimeter Array (ALMA), which tells us that not only might objects orbiting a binary star exhibit chaotic paths, they might not all orbit in the same plane.

Because of the way planets form -- coalescence of dust and debris from a flat ring surrounding the host star -- planetary systems seem mostly to be aligned with each other.  In our own Solar System, the eight planets all orbit within seven degrees of the Earth's orbital plane (excluding, sadly, Pluto, which still hasn't recovered its planet status, and has an orbital tilt of just over seventeen degrees).

But apparently there are exceptions.  Some binary stars have planets that orbit in a highly tilted ellipse with respect to the orbit of the two stars around their own center of mass.  How this could happen -- whether the planets condensed from a ring that was already tilted for some reason, or that the three-body chaos warped the orbits after formation -- isn't known.  "We want to use existing and coming facilities like ALMA and the next generation Very Large Array to study disk structures at exquisite levels of precision," study lead author Czekala said, "and try to understand how warped or tilted disks affect the planet formation environment and how this might influence the population of planets that form within these disks."

Which is pretty cool.  While it won't solve the more general difficulty of the three-body problem (and the four-, five-, six-, etc. body problems), it will at least give some empirical data to go on with which to analyze other systems ALMA finds.

So we're homing in on Tatooine.  For what it's worth, it looks like the overall situation might be more similar to Star Wars than it is to Lost in Space.

Which is a good thing in a variety of respects.