Since Jurassic Park, it hasn't been news to most people that birds are dinosaurs.  The evidence from skeletal analysis is unequivocal; not only is your average little garden sparrow a dinosaur, it's close cousin to one of the most famous prehistoric animals, the fearful Velociraptor.  (Which apparently was a pack hunter, but probably wasn't smart enough to figure out how to unlatch a freezer door, so take what you see in the movies with a grain of salt or two.)

The mystery is why the ancestors of modern birds survived, and all of the other dinosaur lineages died out.  The old saw of "the dinosaurs were dying out anyhow, and the meteorite impact finished 'em off" is almost certainly untrue; the dinosaurs were apparently doing just fine when Chicxulub hit, flash-frying anything nearby and causing global havoc (and nearly simultaneously the colossal Deccan Traps volcanic eruptions occurred -- geologists are still debating whether those two events are causally linked).

But whatever the cause(s), the dinosaurs were clearly doing well, then whammy.  And, for what it's worth, they'd been pretty much in charge of the world for the entire Mesozoic Era, a time span of 180 million years (and to put that in perspective, that's over a hundred times longer than Homo sapiens has been in ascendancy).  It's probable that the reason most of the best-known species of dinosaurs became extinct is that when conditions suddenly become dire, the two groups to suffer most are the large species and the extreme specialists, both of whom are intolerant to a rapidly changing environment.  But hard evidence of this, in the form of fossils from right around the time of the end-Cretaceous Extinction, have been few and far between.

This week a paper in Nature added a new piece to the puzzle -- a fossil bird from 66.7 million years ago, only 700,000 years before Chicxulub et al. said finis to the Age of the Dinosaurs.  So here we have in hand a species that probably made it through the bottleneck -- because it looks like what may well be the common ancestor between galliform birds (chickens and turkeys) and waterfowl.

In "Late Cretaceous Neornithine from Europe Illuminates the Origins of Crown Birds," by Daniel Field, Juan Benito, and Albert Chen (of Cambridge University), John Jagt (of Natuurhistorisch Museum Maastricht in the Netherlands), and Daniel Ksepka (of the Bruce Museum of Greenwich, Connecticut), we read about read about a fascinating find that the researchers have dubbed "Wonderchicken:"


Our understanding of the earliest stages of crown bird evolution is hindered by an exceedingly sparse avian fossil record from the Mesozoic era.  The most ancient phylogenetic divergences among crown birds are known to have occurred in the Cretaceous period, but stem-lineage representatives of the deepest subclades of crown birds—Palaeognathae (ostriches and kin), Galloanserae (landfowl and waterfowl) and Neoaves (all other extant birds)—are unknown from the Mesozoic era.  As a result, key questions related to the ecology, biogeography, and divergence times of ancestral crown birds remain unanswered.  Here we report a new Mesozoic fossil that occupies a position close to the last common ancestor of Galloanserae and fills a key phylogenetic gap in the early evolutionary history of crown birds.  Asteriornis maastrichtensis, gen. et sp. nov., from the Maastrichtian age of Belgium (66.8–66.7 million years ago), is represented by a nearly complete, three-dimensionally preserved skull and associated postcranial elements.  The fossil represents one of the only well-supported crown birds from the Mesozoic era, and is the first Mesozoic crown bird with well-represented cranial remains.  Asteriornis maastrichtensis exhibits a previously undocumented combination of galliform (landfowl)-like and anseriform (waterfowl)-like features, and its presence alongside a previously reported Ichthyornis-like taxon from the same locality provides direct evidence of the co-occurrence of crown birds and avialan stem birds.  Its occurrence in the Northern Hemisphere challenges biogeographical hypotheses of a Gondwanan origin of crown birds, and its relatively small size and possible littoral ecology may corroborate proposed ecological filters that influenced the persistence of crown birds through the end-Cretaceous mass extinction.

This fossil is pretty spectacular -- and unique.  "It shows a never previously seen mashup of ducklike and chickenlike features," said study lead author Daniel Field, a vertebrate paleontologist at the University of Cambridge.  "It’s like a turducken."

This pushes forward the date estimated for the last common ancestor of all modern birds, previously estimated by molecular clock data as between 139 and 89 million years ago.  Asteriornis is a very close ally to the ancestor of two large bird groups, so it could be that true birds evolved much closer to the end-Cretaceous Extinction than we'd previously thought.

So I'm sure you're wondering what Wonderchicken looked like.  Here's an artist's reconstruction (art by Phillip Krzeminski): 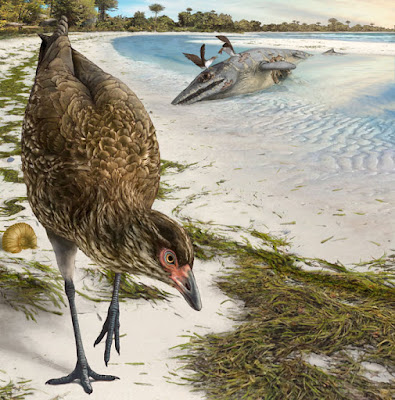 Recognizably a bird, isn't it?  Not some scary toothy flying dinosaur like Archaeopteryx.  Poor thing, little did it know that hard times were coming, although maybe knowing its descendants would be some of the survivors would have cheered it up.

And its relevance was obvious the moment the team saw the results of the computerized tomography of the skull.  "The timeline was: See the skull, scream ‘Holy shit,’ give my Ph.D. student a high five, and then start calling it the Wonderchicken," Field said, in an interview with Science News.

Wonderchicken was about the size of a modern quail, further supporting the conjecture that small size was a factor in surviving the bottleneck.

So that's another piece in the evolutionary puzzle, and something to think about next time you fill the birdfeeders for the local chickadees.  Modern biodiversity has been mostly shaped by evolution, but random and unpredictable natural disasters played their own role in determining who the winners and losers would be.  And here we have hard evidence of one of the winners -- an unprepossessing bird from right before one of the biggest catastrophes the Earth has ever seen.