I got into an interesting (and quite cordial) exchange with a loyal reader of Skeptophilia a couple of days ago.

He's an open-minded sort but definitely more likely than I am to credit tales of the paranormal, especially those having to do with hauntings.  We talked a little about some of the better-known ghostly claims, and he said, "The thing is, how could all of those stories be false?  Okay, I'm willing to admit that a lot of them are.  Maybe most.  But what you're telling me is that of all the thousands of allegedly-true ghost stories out there, 100% of them are fabrications.  That seems to me to take more faith than a belief in ghosts does."

My answer was first to correct a misapprehension; I don't disbelieve all those claims.  As he points out, at least for some of them, we don't have hard evidence that they are hoaxes, because there's no hard evidence of any kind.  My position is that none of the ones I've seen meet the minimum standard that science demands.

And that's it.  If your grandmother's sister's best friend's husband's second cousin saw a ghost with her own eyes, that's all well and good.  It might be true.  It might be that she made it up, or that she was tricked by a fault in human perception (heaven knows, there are enough of those), or that whatever it was she saw has a perfectly natural, non-ghostly explanation.  That's where we have to leave it: we don't know.

As skeptics, the default belief is that what you see around you has a natural scientific cause.  When something goes bump in the night, and you can't figure out what that bump was, you fall back on "well, it must have been an animal or a tree branch hitting the roof or something like that."  You don't jump to it being the ghost of the old lady who owned this house in 1850 and died after falling down the stairs unless you have some pretty damn good evidence.

There's one other issue that confounds our ability to accept tales of hauntings, and that's the unfortunate talent humans have for embellishment.  Hey, I'm a novelist, and I know all about that; there's no story that can't be made better by adding new twists and turns and details after the fact.  What this does, though, is to obscure any facts that the story does contain, and leave you with no real knowledge of where the truth ends and fiction begins.

One hallmark of a story like this -- that may have started out with bare-bones truth, but grew by accretion thereafter -- is when there are several versions of the story.  Take, for example, the Scottish legend of Pearlin Jean, in which the main characters were very real.

The central figure of the story is Robert Stewart (or Steuart) (1643-1707), 1st Baronet of Allanbank (Berwickshire).  Stewart was a nobly-connected merchant in Leith, and like a lot of rich folk of the period, when he was a young man his parents sent him to do a tour of continental Europe as part of his education.  He spent some time in Rome, but apparently while in France did another thing that young men often do, which was to have a torrid affair, in this case with a young woman named Jean (or Jeanne).

The liaison was never intended to be permanent, at least not by Stewart, and he made it clear he intended to return to Scotland to take his place in the upper crust.  But after that, things kind of went awry.

If you've read any traditional ghost stories, you can probably predict what happened next -- Jean dies, and Stewart ends up being plagued with a vengeful ghost.  But the way this happens depends on which version you read.  Here are three I found:
Afterward, the ghost -- nicknamed "Pearlin Jean" because of the dress of gray pearlin lace she wore, which in one version of the tale had been given to her by Robert Stewart -- followed her lover around, generally making his life miserable by appearing at inopportune times (although is there an opportune time for the ghost of your dead mistress to show up?), slamming doors and running up and down the staircase.  On one occasion -- at least in one iteration of the story -- Stewart got the crap scared out of him after returning home from a drive, and when he was ready to climb out of the carriage was stopped cold by an apparition of a woman in a lace dress with blood all over her face.  He was frozen in place until one of his servants came out to see what was amiss and the ghost disappeared.

Creepy tale, no doubt about that.  But what part of it is true? 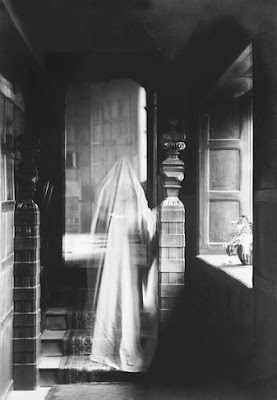 Alleged ghost photograph, most likely a double exposure (1899) [Image is in the Public Domain]

Robert Stewart was a real person, that's certain enough.  As far as Pearlin Jean -- who knows?  I find it a little suspicious that Stewart is known to have married twice, and both of his wives were named Jean -- first to Jean Gilmour, daughter of John Gilmour of Craigmillar, and second to Jean Cockburn, daughter of Alexander Cockburn of Langton.

On the other hand, it's entirely possible that when people remembered Stewart's relationships with two (real) women named Jean, adding a third just sort of happened.

The difficulty here is that some parts of the legend are true, and of the remainder, there might be bits of it that are as well -- but which bits?  Needless to say, I'm not buying the ghostly business, and even with the tragic but non-supernatural parts -- a rich young man's dalliance with a poor and vulnerable young woman, that led to her death -- there are too many different versions to know exactly what did happen and what were later embellishments or outright fabrications.

And the problem is, a great many ghost stories are like this.  Multiple versions, and no real scientifically admissible evidence.  So my friend's comment that some of them could be true is a possibility, but figuring out after the fact which ones is very often an impossibility.

This is why with modern claims of the paranormal, I'm very much of the opinion that any reasonably coherent ones deserve exploration when they happen, rather than waiting until afterward and the inevitable human tendency toward embellishment (and outright misremembering) occurs.  I fully support groups like the excellent Society for Psychical Research -- they're committed to investigating claims from the standpoint of scientific evidence, and are unhesitating in calling a hoax a hoax.

So I'm open to being convinced.  Yes, it might take a good bit of convincing, but as with just about everything, if presented with adequate evidence I'll have no option but to accept that my default position -- that there is a natural, non-paranormal explanation -- was wrong.

But thus far, Pearlin Jean and the hundreds of other stories like it just aren't doing it for me.