The phenomenon of sports is a funny thing, isn't it?

I say this even though there are sports I thoroughly enjoy.  I've rooted wildly at many a Cornell University hockey game.  I always make a point of watching the Olympics, especially ski jumping and short-track speed skating (in winter), and the track and field events (in summer).  I don't currently participate in a team sport -- but even my favorite athletic activity, running, becomes a great deal more fun when I'm in an actual race.

Not that I ever win, mind you.  I like running, but that doesn't mean I'm fast.  I doubt I'll be in contention for a medal until I'm in the "Men Ninety and Over" group, and if at that point I'm still running at all, I'll feel pretty damn good about it even if (1) I'm the only person in that category, and (2) I come in last.

But the whole phenomenon of sports is a little peculiar, if you picture trying to explain it to an alien intelligence.  The conversation might go as follows:


You: So, there's this ball, and it's kicked around in a field, and you're trying to get it into the net.

You: Because that's how you score points.  Oh, and nobody can use their hands except the ones standing in front of the net.

Alien: But doesn't that make it harder?

You: Yes.  That's why they do it that way.  And each team is trying to get control of the ball and kick it toward their opponent's net.

Alien: So the people on each team want the ball?

Alien: Why don't they just give each team member their own ball?

You: Because that's against the rules.

Alien (radioing the mother ship): You were right, there's no intelligent life down here.  As soon as I beam up, vaporize the planet.

One possible explanation is that sports act as a proxy for warfare.  We can form tribes and vie for something pointless, and frequently beat the absolute shit out of each other, and at the end everyone goes home more or less intact.  As author Jonathan Haidt put it in his wonderful TED Talk "The Moral Roots of Liberals and Conservatives," "This behavior is deeply rooted in our tribal psychology, and it... is so deeply pleasurable to us that even when we don't have tribes, we go ahead and make them, because it's fun.  Sports is to war as pornography is to sex; we get to exercise some ancient drives."

However odd it is, sports is ubiquitous.  As far as I've heard, anthropologists have found something in the way of team or individual sports competitions in every culture studied.  But if you think we take sports seriously here in the United States, consider the Aztecs.

The Aztecs played a sport called ullamaliztli.  It looked a little like a weird amalgam of soccer and basketball -- there was a stone ring at each end of a court, and players were trying to get a heavy rubber ball through the ring.  But like soccer, they couldn't use their hands -- they hit the ball with their hips. 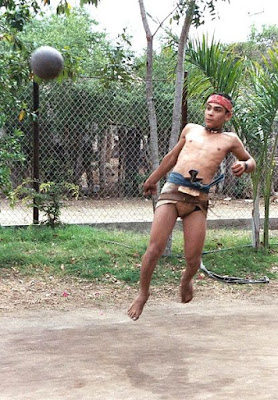 Now I don't know about you, but the idea of swiveling my hips so fast I could strike a rubber ball hard enough to propel it through a stone ring eight feet off the ground is so far out of the realm of possibility that I have a hard time even picturing it.  Archaeologists have found evidence that in some forms of the game bats, rackets, or the players' forearms were allowed, but to be honest, we really don't know much about the rules.  There's a form called ulama (the word comes directly from the Nahuatl name referenced above) still played in a few communities in Mexico, but no one knows if the rules are the same as the traditional game as it was played centuries ago.

It is known, however, to be a seriously rough sport.  Apparently ulama players are constantly covered with bruises from the hard rubber ball.  Still, it's not as bad as it used to be.  Aztec ball games frequently ended with human sacrifice -- whether of the losing or winning team or both is unknown.  (Being sacrificed to the gods was apparently considered an honor at some points during Aztec history, so competing to vie for who gets his heart cut out is not out of the realm of possibility.)

And it's been going on for a long time.  The reason this particular topic comes up is that this week a paper appeared in Science Advances that a ball court was uncovered by archaeologists in Etlatongo in the hills of southern Mexico that is 3,400 years old.

"The discovery of a formal ball court [at Etlatongo] … shows that some of the earliest villages and towns in highland Mexico were playing a game comparable to the most prestigious version of the sport known as ullamalitzli some three millennia later by the Aztecs," said Boston University archaeologist David Carballo, commenting on the study (he did not participate in the research). "This could be the oldest and longest-lived team ball game in the world."

For some reason, the Etlatongo ball court was burned, some time between 1174 and 1102 B.C.E.  Charred clay figurines of ball players have been found at the site, as well both human and non-human animal bones.  It's impossible to tell from what was found why the site was burned, but just the idea that this place has evidence of a 3,400 year old sport is pretty amazing.

You have to wonder how long evidence of our own sports would last in our absence.  Stadiums, courts of various sorts, ball fields... it's hard to see how any of them would clue in future archaeologists about what sorts of games we played and watched, even if they survived long enough to be recognizable.  Maybe kids' sports action figures would have a better chance, leaving the researchers a thousand years hence trying to puzzle out rules to our sports from the attire and stance of the players, captured in plastic.

A little like what we're doing with clay figurines left behind from the Mesoamerican ball games played more than three millennia ago.  Which shows that our penchant for competing over pointless stuff is very far from recent vintage.