The light show of a lifetime

Because I am absolutely saturated with the bad news about COVID-19 and our government's complete balls-up of a response -- as I suspect many of us are -- today I'm going to focus on something to look forward to.

During my lifetime, comets have largely not lived up to the hype.  Oh, they're cool, no doubt about it, but compared to accounts of the double-header of "daylight comets" that occurred in 1910 -- the unnamed "Great Comet" that appeared in January, and Halley's Comet in April -- the ones I've seen have been faint, visible to the unaided eye as a vague streak, showing their unearthly beauty only through binoculars or telescopes.  The first comet I remember anticipating, Kohoutek in 1973, fizzled miserably, and the claims that it would be the "Comet of the Century" fell far short of the mark.  Even Halley's reappearance in 1986 was a bit of an anticlimax, with a display that was nowhere near as spectacular as it had been in 1910.

But this time we may just have a winner.

Discovered this past December by the automated search program with the rather terrifying name "Asteroid Terrestrial-impact Last Alert System," Comet C/2019-Y4 (ATLAS) is already brightening rapidly, and has increased by four magnitudes in only three months.  (It's currently at a magnitude of +15, well below the threshold for unaided-eye visibility.)  If it continues on its current trajectory brightness-wise, by mid-May it could be at a magnitude of -8 -- four magnitudes brighter than Venus.

If that happens, it could actually be the best comet of the past hundred years.

Still, it's wise to remember the words of Canadian astronomer David Levy, co-discoverer of Comet Shoemaker-Levy in 1993, which made a spectacular collision with the planet Jupiter the following year.  "Comets are like cats," Levy said.  "They have tails and they do whatever they want."

So we really don't know for sure what it's going to do.  Writing for the website Astronomy, Alister Ling says, "The big unknown: Is Y4 ATLAS a lightly powdered rubble pile that produces a meager tail that dissolves into nothingness?  Or does luck strike us with a dust-choked snowball whose tail forms the magnificent sword we see in paintings of old?  A touch of aurora or noctilucent clouds would really top off the light show."

One bit of good news for those of you who, like me, live in the Northern Hemisphere; if ATLAS puts on a grand performance, we've got front-row seats.  The path of the comet against the backdrop of stars makes a swoop through the northern sky, starting near the Big Dipper, peaking in brightness in May as it passes the through the constellation of Perseus, finally disappearing from sight in June near Betelgeuse in Orion. 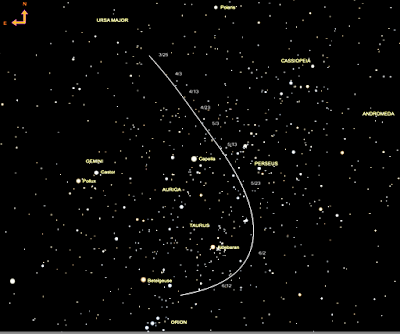 Ling waxes rhapsodic over what we may be in for:

The week of May 25 to 31 is the week when we take the iconic pictures of Y4 and forge our memories of a lifetime. ATLAS is literally diving past the Sun, brightening a magnitude per day. The top half of the tail remains above the horizon all night, drawing our view downward. As minutes flow by, the tail brightens, overcoming the rising oranges and yellows of dawn until it reaches the brilliant head of the comet, lifting off the horizon...  If the sky is a dark transparent blue and ATLAS exceeds our expectations, we might snag the elusive trophy of a historical daylight comet.

I know better than to get my hopes up too high; comets' catlike behavior has caught me too often before.  But even if it's not the brightest object in the night sky, it should give us some fine opportunities for viewing, and even more for aficionados of astrophotography.

Whatever it does, it's nice to have something positive to look forward to.  So keep your eye on the skies, and hope for a light show that will be something to remember.