The power of models

I get that scientific terminology can be daunting.  Scientists, and therefore scientific papers, have become so specialized that unless you are an expert, the vocabulary by itself can be an overwhelming barrier to understanding.  That only gets worse in disciplines like physics and chemistry, where complex mathematics throws another spanner into the works.  I have a B.S. in physics, enough credits for a second major in biology, and a minor in math, and am reasonably articulate, but just about every academic paper I've ever seen loses me within a couple of paragraphs, except for the two areas I know best -- population genetics and evolutionary biology.

So I'm not expecting laypeople to become experts in scientific jargon.  But there are two words I really wish everyone would familiarize themselves with -- theory and model.

Confusion over the first one is what gives rise to the "it's only a theory" *shrug* reaction a lot of people have when discussing the theory of evolution.  Theory, in scientific discussions, does not mean "a wild guess that could as easily be wrong as right."  In scientific parlance, a theory is an explanation of a natural phenomenon that has passed repeated tests and makes predictions that are in good accordance with the data.  This is why intelligent design creationism isn't a theory; it makes no predictions.  If things get complex, it defaults to "God did it," and the conversation ends.

In science, a model is a representation of a natural object, system, or phenomenon, often idealized or simplified, that can then be manipulated -- once again, to see if the results are consistent with observed data from the real world.  As an example, the computerized three-dimensional maps of the climate are models, breaking up the atmosphere into thousands of cubical regions and the land and ocean into square blocks of area, with specifications for atmospheric composition, heat absorption capacity for land and water, solar radiation input, and so on.  The software can take the known input parameters and then run a simulation to see if what comes out matches what we actually know of the real climate data (and they have, to a startling degree of accuracy, something that is simultaneously impressive and terrifying).

The problem with the idea of modeling is that to an outside observer, it may look like the scientists are just messing around -- playing Sims with the world, with no particular expectation that what they're doing has anything in common with reality.  This, of course, is the opposite of the truth -- if a model doesn't align very well with the natural world, it's rightly abandoned for one that works better.

Even models that seem to be a little bit out there are only retained because they describe a known part of the universe sufficiently well that their predictions can be useful for describing something not yet understood.  Take, for example, the paper last week in Proceedings of the National Academy of Sciences that used what's known about biochemistry to make a stab at the configuration and composition of the earliest proteins, molecules that were around 3.5 billion years ago -- produced abiotically before there were any living things on Earth.

In "Small Protein Folds at the Root of an Ancient Metabolic Network," Hagai Raanan, Saroj Poudel, Douglas Pike, Vikas Nanda, and Paul Falkowski, of Rutgers University, describe a sophisticated computer simulation that took what we know about the chemistry that is common to all living organisms (such as using oxidation/reduction reactions to power metabolism) and combined it with what is surmised about the conditions on the early Earth, and used it to infer what the earliest energy-transfer proteins looked like.  The authors write:


Life on Earth is driven by electron transfer reactions catalyzed by a suite of enzymes that comprise the superfamily of oxidoreductases (Enzyme Classification EC1).  Most modern oxidoreductases are complex in their structure and chemistry and must have evolved from a small set of ancient folds.  Ancient oxidoreductases from the Archean Eon between ca. 3.5 and 2.5 billion years ago have been long extinct, making it challenging to retrace evolution by sequence-based phylogeny or ancestral sequence reconstruction.  However, three-dimensional topologies of proteins change more slowly than sequences.  Using comparative structure and sequence profile-profile alignments, we quantify the similarity between proximal cofactor-binding folds and show that they are derived from a common ancestor.  We discovered that two recurring folds were central to the origin of metabolism: ferredoxin and Rossmann-like folds.  In turn, these two folds likely shared a common ancestor that, through duplication, recruitment, and diversification, evolved to facilitate electron transfer and catalysis at a very early stage in the origin of metabolism.

Here's one of the ancestral proteins the model generated: 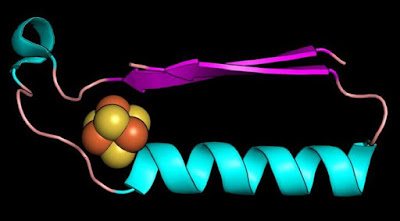 Now, maybe you see this as a bunch of hand-waving in an intellectual vacuum.  After all, we have no way of going back 3.5 million years and checking to see if the model is correct.  But the key thing is that this was created within parameters of how we know proteins work, and what we see in the energy-transfer proteins of current organisms.  This model was very much constrained by reality -- meaning that its results have a really good chance of being accurate.

Further, like any good model (or theory, for that matter), it generates predictions -- in this case, what we might look for as a signature of emerging life on other planets.  "In the realm of deep-time evolutionary inference," the authors write, "we are necessarily limited to deducing what could have happened, rather than proving what did happen...  Ultimately, our goal is for the proposed effort to inform future NASA missions about detection of life on planetary bodies in habitable zones.  Our effort provides a unique window to potential planetary-scale chemical characteristics that might arise from abiotic chemistry, which must be understood if we are to recognize unique biosignatures on other worlds."

So models and theories aren't guesses, they're real-world descriptions, and the best ones give us deep insight into the workings of the universe.  As such, they are part of the scientist's stock-in-trade -- and essential to understand for laypeople who would like to know what's happening on the cutting edge of research.