Attack of the sex goblins

Because I'm tired of doing what we've done here lately, viz. looking at horrible scary things that could wipe out the human race if we don't for pity's sake do something, today I'd like to consider:

I mean, maybe they want to wipe out the human race, too, but all things considered, it sounds like a more pleasant way to go than coronavirus, climate change, a supernova, or a death asteroid.

The ball got rolling in this case because of an article sent to me by a loyal reader of Skeptophilia that started me thinking about why paranormal creatures always seem to show up amongst people who already believe in them.

Odd, isn't it?  And I'm not talking about cryptids, per se -- creatures that, if they exist, might be expected to have a native range just like any other animal.  I'm talking about real supernatural entities -- and I use the word "real" with some trepidation -- like the Jinn (who, strangely enough, are never seen outside of the Middle East), Trolls (more or less limited to Scandinavia), and the Tokoloshe (ditto South Africa).

It's a funny thing.  I mean, if they really are powerful, and can appear wherever they want to, I would think that on the whole it would be more effective for some of these creatures to show up in front of complete non-believers.  Like, at a meeting of the U. S. Senate, or something.   Can you imagine? Especially if it was the Tokoloshe, a grotesque being that is supposed to run around naked, and to have an enormous penis and only one buttock.

I don't know about you, but I would love to see the look on Mitch McConnell's face.

But it never happens that way.  The big, dramatic appearances are always around people who already are convinced such things exist.  Usually while they're alone.

In any case, the article was about an incident at a school in Zimbabwe a while back, wherein Headmaster Peter Moyo was accused of terrorizing his students with goblins that were under his command.  Why Mr. Moyo would do such a thing isn't clear, and the specific accusations are peculiar, to say the least:


Villagers in Dongamuzi area under Chief Gumede in Lupane are demanding the transfer of Ekuphakameni Secondary School headmaster Mr Peter Moyo, whom they accuse of owning goblins that have been terrorising pupils and teaching staff at the school. Last term lessons at the school were disrupted for almost two weeks after teachers abandoned the school following several nights of sexual abuse by the alleged goblins...

Some male teachers also claimed that they woke up every morning wearing female panties whose origin they did not know.

Villagers have called for the transfer of the school head whom they say was fingered during a recent cleansing ceremony held at the school.

My first reaction is that given the nature of the accusations, they could have chosen their wording better than to say that Mr. Moyo was "fingered" at the cleansing ceremony.

Be that as it may, the ceremony appears to have helped:


A cleansing ceremony dubbed Wafawafa, was held at the school on 5 March this year by the International Healers’ Association, during which the villagers say Mr Moyo was exposed after an assortment of paraphernalia associated with witchcraft was recovered from his bedroom.

A village head from the area, Mr Emmanuel Chasokela Maseko, said normalcy had returned to the school since the cleansing ceremony was held but insisted that Mr Moyo should be transferred from the school as he was a risk to the community.

So... Mr. Moyo was exposed, was he?  Okay, that's it; you need to repeat the journalism class in "Avoiding Double Entendres."

But anyway, what strikes me about all of this is that (1) the appearance of panties and the "signs of having had sex" could both be accounted for by the people in question actually having had sex, and then not wanting to admit it; and (2) the goblins seem like a convenient way to get rid of the headmaster, especially if he knew about the nighttime shenanigans and was trying to put a stop to them.  Only a supposition, but this seems more likely to me than there being a real Pack of Sex Goblins under Mr. Moyo's command. 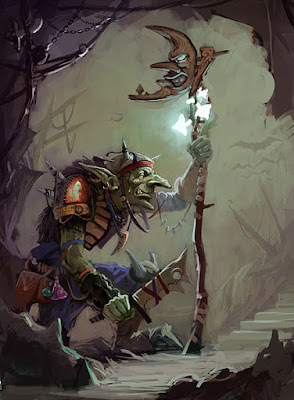 But since the authorities obviously believe in goblins who visit at night to have their wicked way with you, it appears that poor Mr. Moyo is out of a job.

So that's our excursion into the regional nature of supernatural entities.  It's a pity, really.  I'd love it if a Frost Giant showed up up at one of Donald Trump's pandemic press briefings/free Re-Elect Donald Trump campaign commercials.  Can you imagine?  Especially if the Frost Giant took it upon himself to smack the absolute shit out of Trump every time he lies.