By any other name...

Scientists have an undeserved reputation for being dry and humorless.

If you doubt the "undeserved" part, consider scientific names.  Because by convention scientific names usually have Greek or Latin roots, they sound pretty sophisticated and fancy -- until you translate them.  The adorable black-footed ferret of the American Rockies is Mustela nigripes, which translates to... "black-footed ferret."  The western diamondback rattlesnake, Crotalus atrox?  Greek for "scary noisemaker."  The name of the mammalian order containing shrews and moles, Eulipotyphla, is kind of insulting.  It means "really fat and blind."  But they only get sillier from there.  How about Eucritta melanolimnetes, a species of amphibian from the Carboniferous Period?  The name means "the real Creature from the Black Lagoon."

And the order of mammals that includes rabbits, Order Lagomorpha?  Translated from Greek, "Lagomorpha" literally means "shaped like a bunny."

The gift of naming a newly-discovered species goes to the discoverer, and if they choose they can name it in honor of someone (it's considered bad form to name it after yourself).  Lots of biologists name species after their teachers or mentors, but the field is wide open.  Entomologists Kelly Miller and Quentin Wheeler named a species of slime-mold beetle after former Vice President Dick Cheney -- whether Agathidium cheneyi was an honor or an insult is open to interpretation.  Some paleontologists working in Madagascar liked to listen to music while they worked, and became convinced that whenever they played Dire Straits, they found lots of new fossils.  Thus, there's a species of Cretaceous dinosaur named Masiakasaurus knopfleri.  A genus of carabid beetles, Agra, has a species named Agra schwartzeneggeri -- Terry Erwin, the entomologist responsible for that one, found a number of other Agra species, and thus we have Agra vation, Agra phobia, and Agra cadabra.

You can even name species after fictional characters.  Thus we have a fuzzy mite named Polemistus chewbacca, an Australian moth with marks that resemble a second head named Erechthias beeblebroxi, an Ordovician trilobite named Han solo, a sponge-like fungus from Malaysia named -- I shit you not -- Spongiforma squarepantsii, a cave-dwelling insect from Spain named Gollumjapyx smeagol, and -- my favorite -- a fish from the fjords of New Zealand named Fiordichthys slartibartfasti.

If you get why that last one is fall-out-of-your-chair hilarious, congratulations; you're as big a nerd as I am.

Some are just outright silly.  Consider the Australian wasp discovered by entomologist Arnold Menke in 1977.  He was so delighted at the find that he gave it the scientific name Aha ha.

And I would be remiss in not mentioning a genus of small mollusks named Bittium.  When a genus of even smaller mollusks was discovered, they named it... you guessed it... Ittibittium.

The reason all this silliness comes up is a discovery that was the subject of a paper last week in PLOS-ONE.  Paleontologists working in Brazil found a fossil of a new species of tanystropheid, a group of Triassic dinosaurs with such bizarrely elongated necks that scientists are still trying to figure out how they walked without doing a face-plant.  (One possible answer is that they were aquatic, but that's not certain.) 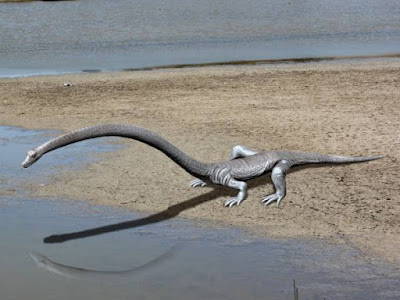 Tanystropheus longobardicus, which is itself sort of a goofy name. It means "long, bent thing with a long beard." I have to wonder how many controlled substances the scientists had partaken of before they came up with that one. [Image licensed under the Creative Commons Nobu Tamura email:nobu.tamura@yahoo.com http://spinops.blogspot.com/, Tanystropheus NT small, CC BY-SA 4.0]

Anyhow, the new species was christened Elessaurus gondwanoccidens.  The species name isn't so interesting -- it means "from western Gondwana," after one of the supercontinents around during the Triassic Period -- but the genus name is clever.  It plays on the usual -saurus (Greek for "lizard") ending of many genera of dinosaurs, but was actually named for Elessar -- one of the many monikers of King Aragorn II from The Lord of the Rings.  Elessar, which means "elf-stone" in J. R. R. Tolkien's wonderful conlang Quenya, was the title Aragorn took after Sauron got his clocks cleaned by Frodo et al. and the former Strider became the King of Gondor.

So that's a look at the deadly serious, dry-as-dust subject of biological taxonomy.  And I haven't even gotten into the off-color ones, which is a whole subject in and of itself.  Suffice it to say that orchid is Greek for "testicle," and there's a mushroom with the scientific name Phallus impudicus ("shameless penis").  I'll leave you to research the rest of that topic on your own.