This seems to be a month for astronomical superlatives.  Two weeks ago I posted here at Skeptophilia about the discovery of the three most luminous quasars ever seen, and just last week a paper hit in Nature Astronomy showing that a supernova seen back in 2016 was the brightest and most powerful ever recorded, outshining the nearest competitor by a factor of ten.

In "An Extremely Energetic Supernova from a Very Massive Star in a Dense Medium" -- given scientists' usual efforts not to overplay their discoveries, the very title indicates how remarkable this is -- a team led by Matt Nicholl of the University of Birmingham describes a massive explosion of a star in a yet-unnamed galaxy four billion light years from us that released energy on the order of 10^52 ergs -- that's a 1 followed by fifty-two zeroes -- which is ten times higher than the previous record-holder.

The galaxy is a dwarf elliptical galaxy, and seems to be similar in structure to the Magellanic Clouds, the two dwarf galaxies near the Milky Way.  This supernova (SN2016aps) is something else again, outshining its entire host galaxy by a large margin.  "SN2016aps is spectacular in several ways," said Edo Berger, Harvard University astronomy professor and co-author on the paper, in a press release.  "Not only is it brighter than any other supernova we’ve ever seen, but it has several properties and features that make it rare in comparison to other explosions of stars in the universe...  The intense energy output of this supernova pointed to an incredibly massive star progenitor.  At birth, this star was at least a hundred times the mass of our Sun."

The reason that the star suffered such a colossal explosion seems to go back to events that preceded the final blast.  It's likely that the star itself was formed from the merger of two less massive stars, an event that caused a huge release of a shell of hydrogen gas from the combined star's surface.  When the core of the star(s) went supernova, the material blasted from the core collided with the shell of hydrogen, touching off an energetic shock wave of a size that beggars belief.

"Spectroscopic observations during the followup study revealed a restless history for the progenitor star,” said study lead author Matt Nicholl.  "We determined that in the final years before it exploded, the star shed a massive shell of gas as it violently pulsated.  The collision of the explosion debris with this massive shell led to the incredible brightness of the supernova.  It essentially added fuel to the fire."

The fact that this supernova is four billion light years away should be reassuring; not only is that a "far piece from here" (as my grandma used to describe anything more than about five miles away), but this means the explosion occurred four billion years ago.  The fact that there has never been anything seen on this magnitude from nearer to us (and therefore, that happened more recently) may mean not only that such events are extremely rare, but that they were more likely in the early universe than they are now.

Which is a relief.  As spectacular as this would be, seeing it from close range would be inadvisable.  Fans of the original Star Trek might remember the episode "All Our Yesterdays," wherein an entire planet's population jumped into the past to escape their host star's impending supernova, and the intrepid members of the Enterprise's away team get trapped in different pasts (of course), almost get killed and/or permanently stuck there (of course), and all get away with seconds to spare (of course).  The final moments -- the star blowing up, and the Enterprise hauling ass to get away -- is pretty dramatic, but underplays the actual magnitude of such an event.  Warp drive notwithstanding, being this close to a supernova would be a good way to get yourself vaporized. 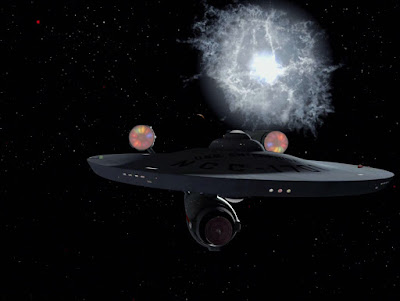 Anyhow, that's our astronomical superlative of the week.  If April keeps going this way, you have to wonder what's next.  Me, I hope that it's a light show from Comet ATLAS, although sadly that's looking less and less likely.  Other than that?  We'll just have to keep our eyes on the skies.