One of the most frustrating arguments -- if I can dignify them by that name -- from creationists is that there are "no transitional fossils."

If evolution happened, they say, you should be able to find fossils of species that are halfway between the earlier form and the (different-looking) later form.  That's actually true; you should find such fossils, and we have.  Thousands of them.  But when informed of this, they usually retort with one of two idiotic responses: (1) that evolution predicts there should be "halfway" forms between any two species you pick, which is what gave rise to Ray "BananaMan" Comfort's stupid "crocoduck" and "doggit" (dog/rabbit blend) photoshop images you can find with a quick Google search if you're in the mood for a facepalm; or (2) that any transitional forms just makes the situation worse -- that if you're trying to find an intermediate between species A and species C, and you find it (species B), now you've gone from one missing transitional form to two, one between A and B and the other between B and C.

This always reminds me of the Atalanta paradox of the Greek philosopher Zeno of Elea.  The gist is that motion is impossible, because if the famous runner Atalanta runs a race, she must first reach the point halfway between her starting point and the finish line, then the point halfway between there and the finish line, then halfway again, and so on; and because there are an infinite number of those intermediate points, she'll never reach the end of the race.  Each little bit she runs just leaves an unending number of smaller distances to cross, so she's stuck.

Fortunately for Atalanta she spent more time training as a runner than reading philosophy, and doesn't know about this, so she goes ahead and crosses the finish line anyway.

But back to evolution.  The problem with the creationists' "transitional fossil" objection is that just about every time paleontologists find a new fossil bed, they discover more transitional fossils, and often find species with exactly the characteristics that had been predicted by evolutionary biologists before the discovery.  And that's the hallmark of a robust scientific model; it makes predictions that line up with the actual facts.  Transitional fossils are an argument for evolution, not against it.

We got another illustration of the power of the evolutionary model with a paper last week in Nature, authored by Richard Cloutier, Roxanne Noël, Isabelle Béchard, and Vincent Roy (of the Université du Québec à Rimouski), and Alice M. Clement, Michael S. Y. Lee, and John A. Long (of Flinders University).  One of the most striking homologies between vertebrates is their limbs -- all vertebrates that have limbs have essentially the same bone structure, with one upper arm bone, two lower arm bones, and a mess of carpals, metacarpals, and phalanges.  Doesn't matter if you're looking at a bat, a whale, a dog, a human, or a frog, we've all got the same limb bones -- and in fact, most of them have not only the same bones, but the same number in the same positions.  (I've never heard a creationist come up with a good explanation for why, if whales and humans don't have a common ancestor, whales' flippers encase a set of fourteen articulated finger bones -- just like we have.)

In any case, it's been predicted for a long time that there was a transitional form between fish and amphibians that would show an intermediate between a fish's fin and an amphibian's leg, but that fossil proved to be elusive.

Readers, meet Elpistostege.  As far as why it's remarkable, allow me to quote the authors:


The evolution of fishes to tetrapods (four-limbed vertebrates) was one of the most important transformations in vertebrate evolution.  Hypotheses of tetrapod origins rely heavily on the anatomy of a few tetrapod-like fish fossils from the Middle and Late Devonian period (393–359 million years ago). These taxa—known as elpistostegalians—include Panderichthys, Elpistostege, and Tiktaalik, none of which has yet revealed the complete skeletal anatomy of the pectoral fin.  Here we report a 1.57-metre-long articulated specimen of Elpistostege watsoni from the Upper Devonian period of Canada, which represents—to our knowledge—the most complete elpistostegalian yet found.  High-energy computed tomography reveals that the skeleton of the pectoral fin has four proximodistal rows of radials (two of which include branched carpals) as well as two distal rows that are organized as digits and putative digits.  Despite this skeletal pattern (which represents the most tetrapod-like arrangement of bones found in a pectoral fin to date), the fin retains lepidotrichia (fin rays) distal to the radials.  We suggest that the vertebrate hand arose primarily from a skeletal pattern buried within the fairly typical aquatic pectoral fin of elpistostegalians.  Elpistostege is potentially the sister taxon of all other tetrapods, and its appendages further blur the line between fish and land vertebrates.

Well, that seems like a slam-dunk to me.  An amphibian-like limb bone arrangement -- with fish-like fin rays at the end of it.

No transitional forms, my ass. 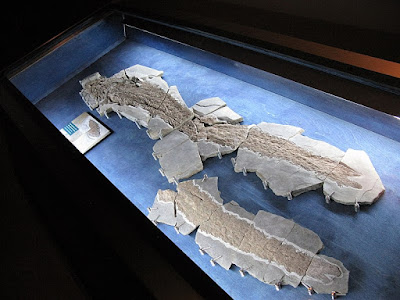 Study lead author Richard Cloutier said basically the same thing, but more politely, in an interview with Science Daily: "The origin of digits relates to developing the capability for the fish to support its weight in shallow water or for short trips out on land.  The increased number of small bones in the fin allows more planes of flexibility to spread out its weight through the fin...  The other features the study revealed concerning the structure of the upper arm bone or humerus, which also shows features present that are shared with early amphibians.  Elpistostege is not necessarily our ancestor, but it is closest we can get to a true 'transitional fossil', an intermediate between fishes and tetrapods."

So there you have it.  Evolution delivers again.  I'm not expecting this will convince the creationists -- probably nothing would -- but at least it's one more fantastic piece of evidence for anyone who's on the fence.  Now y'all'll have to excuse me, because I'm off to the kitchen to get another cup of coffee, and it's going to take me an infinite amount of time to get there, so I better get started.

Posted by Gordon Bonnet at 4:53 AM